The big news in the world of auctioned Tigers tat this month is the sale of match worn shirts from the November 5th home game against West Ham. The shirts feature red poppy appliqués as the game was the nearest fixture to Remembrance Sunday. All of the shirts worn that day are available to buy (substitutes and all), with the proceeds from the auction going to the Royal British Legion Poppy Appeal – a most noble cause.

At the time of writing, Robert Koren’s shirt was valued highest by frantically bidding Tiger Nationals, whereas substitute James Harper’s shirt was going for £NotMuch, which will probably get him some stick on the training ground. All of the listings are on the Tiger Leisure eBay store page.

Among other shirts catching the eye of City fans on Ebay is a “Mid 60s soccer replica” (shown below). At first glance, it appears to be a pretty good attempt at recreating the shirt City wore during the 1964/65 season. 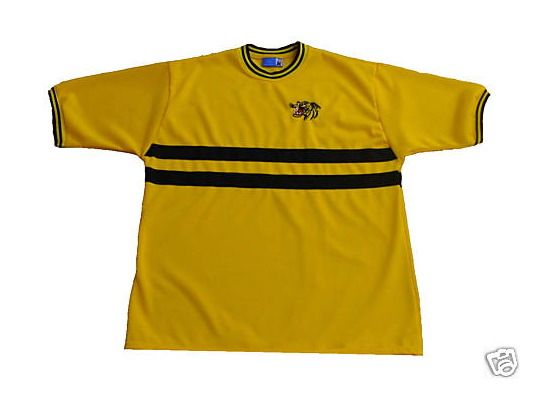 However closer examination reveals one critical error. Though the pitiful, emaciated tiger head crest was used on many different shirts between 1947 and 1975, it did not appear on the 1964/65 jerseys (as seen below). That year’s shirts had two black hoops (not bands, as they were on the back too) and would surely have been considered classics had they been worn with black shorts. 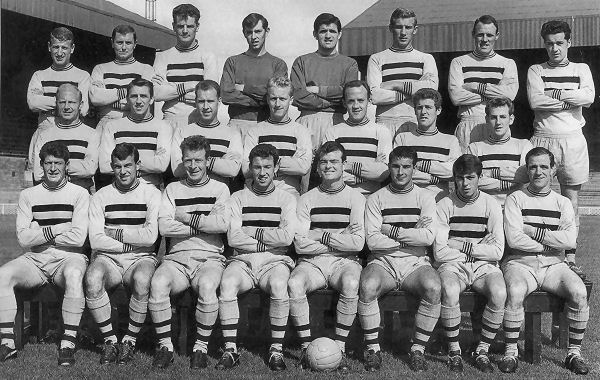 Instead, amber shorts were used and the dearth of contrast across the full kit made it look washed out, it was derisively termed ‘the banana kit’ and lasted but one year. The idea of rehabilitating the mid-Sixties kit’s reputation with a modern replica shirt is a laudable one, but the execution could be better.

We note that several 1992/93 season Matchwinner/Bonus tiger stripe shirts have fetched in excess of £150 for their sellers in recent weeks, though a slightly less than perfect condition shirt (size large) went for a ‘mere’ £87 (plus postage) on Wednesday. In contrast a 1982-83 Admiral home shirt went for just short of £105 last week.

How much would you be willing to part with for an old/match worn shirt, and what is your holy grail?