The commercial imperatives of the modern game insist on each side having three distinct outfield kits. Take Hull City’s current deal with Umbro, signed in 2014 and extended in 2018 to last until 2021/22, which codifies that the Tigers will have three new kits per season, as well as goalkeeper kits plus training, warm-up and leisure gear.  As a result, we’ve become used to seeing third kits in action.

Not that they’re a new thing… Hull City wore an AC Milan-alike third kit several times in the 1971/72 season, it’s just that before football became big business in the post-Taylor report/Sky Sports era, third kits tended to be used only when they were truly needed. 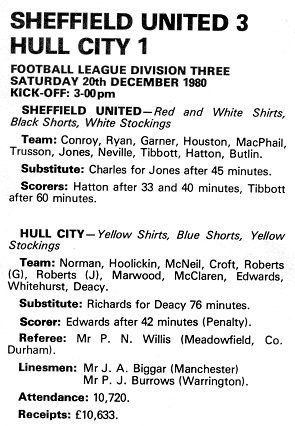 Such an instance occurred in 1980/81, when City travelled to South Yorkshire for a Division Three clash with Sheffield United.

A few weeks after the game at Bramall Lane, which the hosts comfortably won 3-1, City’s programme noted the encounter in the ‘For the record’ section. As well as the line-ups, match officials, attendance and gate receipts, the respective kits of each side were listed.

It states that the Tigers were dressed in Yellow shirts, Blue shorts, Yellow stockings.

Despite yellow and blue being the civic colours of Hull, there’s something quite jarring about the idea of Hull City wearing them.

Perhaps that’s because yellow is quite close to the club’s amber on the colour spectrum, close enough for us to need a change kit when visiting teams with yellow home shirts, so the Tigers wearing yellow AS a change colour seems counter-intuitive.

Not all kit clashes are caused by shirts however, and City’s black primary shorts are the reason we tend to change-up when visiting Bramall Lane. Amber alternate shorts allow us to wear our primary shirts at Sheffield United without a mash-up, a look we went with in 2019/20, but sometimes we go with a full away kit, as in 2017/18.

Curiously, a shorts clash was not considered to be an issue in 2014 when the two sides met in the FA Cup semi-final at Wembley.

Back in 1980, mash-ups solved the shorts clash issue twice: In January 1980 the Blades and Tigers shared a point after a 1-1 draw in Division Three. City’s outfielders wore white away shorts with the home shirts and amber socks, though ‘keeper Eddie Blackburn went with the trackie pants option.

City were back at Bramall Lane in August 1980 for an Anglo-Scottish Cup group stage game. They again wore white away shorts with the home shirts, but this time they had black socks distinct from the regular home socks. The usual socks had amber stripes on the fold-over bands, but this set had white stripes. Sheffield United won 2-1 in City’s penultimate Anglo-Scottish Cup tie, the last came three days later when City drew 1-1 with Chesterfield, who would go on to win the competition in it’s last year, overcoming Rangers, Bury and Notts. County to claim the silverware.

City’s next trip to Sheffield to face United, late in December 1980, would see them pack yellow and blue garments in their kit crate, and who know’s why?  Was the city’s colours a factor in the decision. or was it just an easy kit to source? Yellow was a popular change shirt choice in this era, after all. In the top division in 1980/81, Arsenal, Birmingham, Chelsea, Everton, Leeds, Liverpool, Newcastle, Nottingham Forest and Tottenham had yellow away shirts, West Brom had yellow and green stripes and Coventry had a yellow third shirt.

Of the teams wearing adidas: Brighton, Bournemouth, Oxford, Preston, Scunthorpe and Wimbledon had yellow shirts with blue polo collars over a V neck, and three blue stripes down the sleeves. This style of shirt being readily available seems to be the most plausible explanation.

The Tigers did not fare well at Bramall Lane in December 1980, Bob Hatton tore us a new one as the Blades won 3-1. Not much to enjoy about this video in a football sense then, as Keith Edwards consolation goal for City has been edited out (it was after all, part of a SUFC History season review video), but it gives us a glimpse, albeit a fuzzy and lo-fi glimpse, of the ‘emergency’ yellow and blue third kit.

While some clubs could claim yellow shirts to be lucky: Southampton (FA Cup 1976), Nottingham Forest (League Cup 1978) and Arsenal (FA Cup 1979) won cup finals in the vibrant tone, Hull City could not. Indeed for the Tigers, yellow’s negative connotations of cowardice and jaundice seemed more appropriate, though to be fair to City, this game was in between two of the three attempts to see off Blyth Spartans in the FA Cup, it’s hard to stay sharp playing four games in ten days.

We’ve not been able to source any photographs from the game at Sheffield United to get a real look at the kit, as the 40 year old broadcast footage really only confirms the colours, but we do wonder if an image of City players relaxing in Gibraltar in 1983 offers some answers.

Back then, old match shirts were recycled as training gear (as this July 1982 shot of players training in Europa shirts that were used in matches between 1975-1979 illustrates) and after training in a yellow shirt with blue trim in the Victoria Stadium in Gibraltar (as part of a pre-season tour in 1983), John Davies keeps it on for some poolside fun… (we’ll totally understand if your eyes go to a barely clothed Don Robinson first). 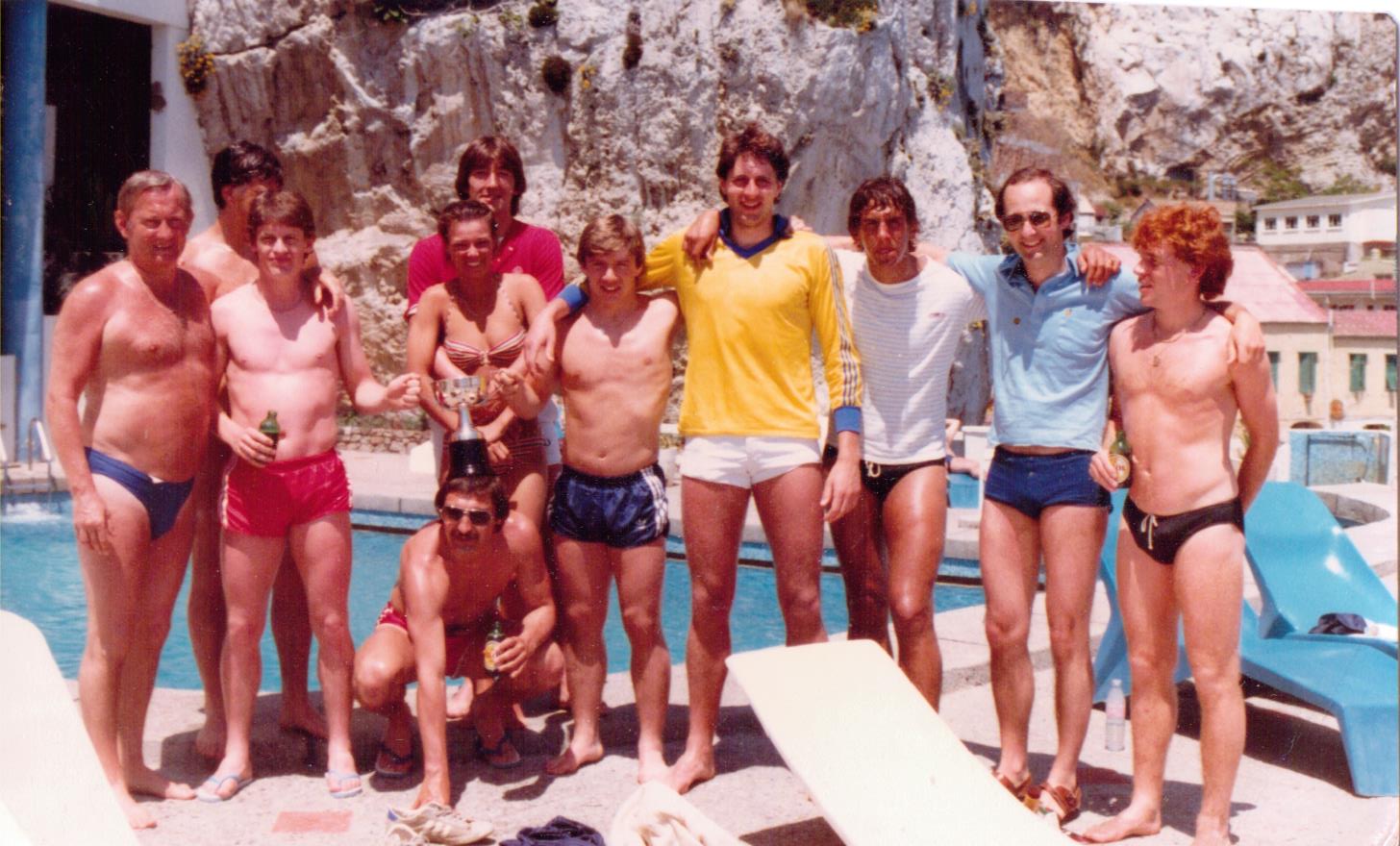 Davies’ shirt has the polo collar over a V neck and shoulder stripes of a ‘Rio’ adidas template shirt, the type used by Brighton, Bournemouth, Oxford, Preston, Scunthorpe and Wimbledon in 1980/81. Bournemouth had no club crest on their yellow away shirt (though they did have a sponsor) nor a club monogram (as Preston and Scunthorpe had), so Davies’ shirt bearing no club marks doesn’t rule it out as being one of the emergency use shirts from the Bramall Lane game, so until we encounter evidence to the contrary, we are assuming this photograph depicts one of the 1980/81 third kit shirts.

This is speculation on our part of course, but we know that old match shirts were used for training when their competitive game lifespan had ended, so it’s likely that the Bramall Lane shirts found a new lease of life in the Boothferry Park gymnasium and on the Costello playing fields that City used for training, and it’s possible that one, or more, were taken on the 1983 Gibraltar trip.

City fan Steve Jennison said he remembered the Tigers wearing yellow and blue at Exeter later in the season (31 January 1981), which got us trawling the web for photographs. The Grecian Archives have scans of Exeter match programmes and we found this image, which shows Steve Richards marking Tony Kellow… 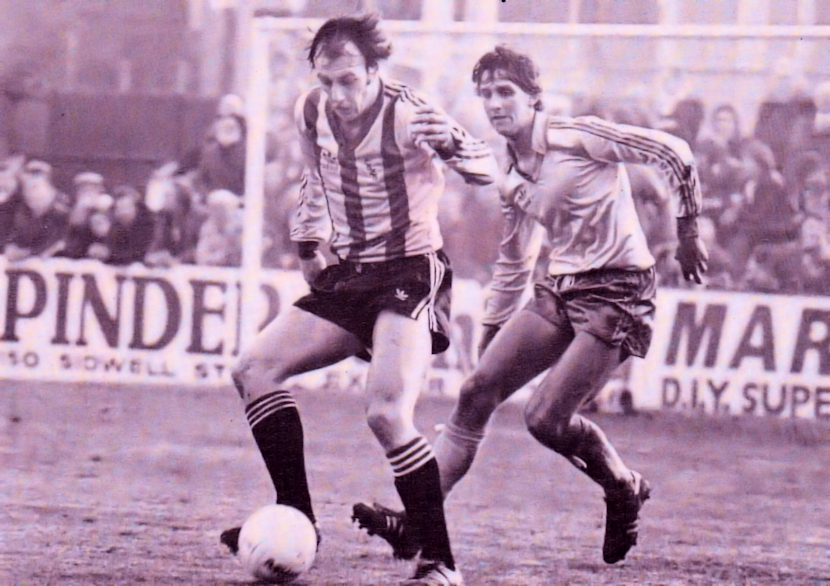 It confirms the suspicion that there was no club crest or monogram, and since City won this game 3-1 with goals from Mutrie, Marwood and McClaren, yellow and blue can’t be considered unlucky anymore, our playing record in it appears to be P2 W1 D0 L1 F 4 A 4. Unless of course we turn up more instances of third kit use, there’s 1981/82 to consider, and we played Sheffield United that season too, as they’d tumbled into Division Four with us.