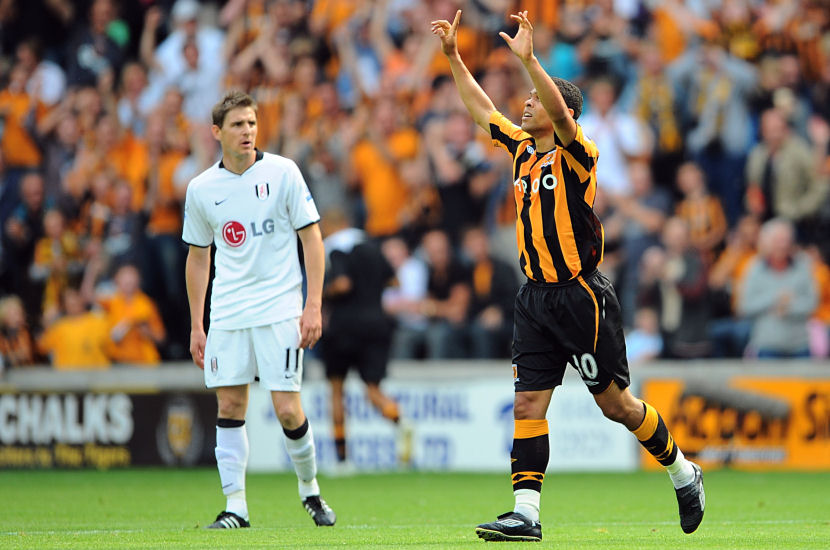 Anniversaries are for reflection, and 2018/19 represents the tenth anniversary of City’s inaugural season in the top flight of English Football, and with it an iconic kit worn in wins at Arsenal and Tottenham that shocked the world, as did a side tipped to be the worst in Premier League history avoiding relegation. Reflection can lead to discovery, and it was while looking back on a campaign that will forever live in Tiger’s folklore that we discovered something previously missed: between early promotional photography and its first use in match action, the primary kit changed slightly.

Less than three months after Dean Windass volleyed the Tigers into the top division at Wembley in May 2008, City were playing their first fixture in the Barclays Premier League, at home to Fulham.

Preparations for life in the Premier League became a maelstrom of activity: new press facilities had to be installed to accommodate international media,  the dug-outs were upgraded, league branded material was delivered, including the signage the players shake hands in front of, and of course the sleeve patches, numbers and name-set appliqués that would be added to the kits. 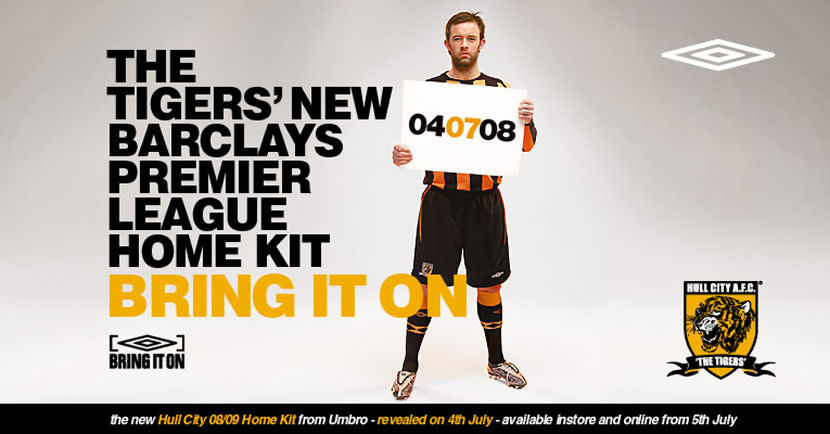 In between all of this, the annual ritual of a home kit launch took place on the 4th of July. The club were again outfitted by Umbro, who’d signed a three season deal with City that begun in the summer of 2007, and after a promotion winning season in solid amber shirts that shared a template with the England national side, the brand with the double diamond logo supplied the Tigers with a kit more befitting of their big cat nickname, one with a shirt that had traditional amber and black striped shirts. Completing the kit were black shorts and black socks, both with amber trim.

Whereas preparations to play in a new division could only begin in earnest when promotion was secured and the champagne hangovers had subsided, plans for a new kit can happen much sooner. Typically the next season’s kits are signed off at the start of each year, production begins on the replicas soon after and promotional work for a summer launch is started in the March. 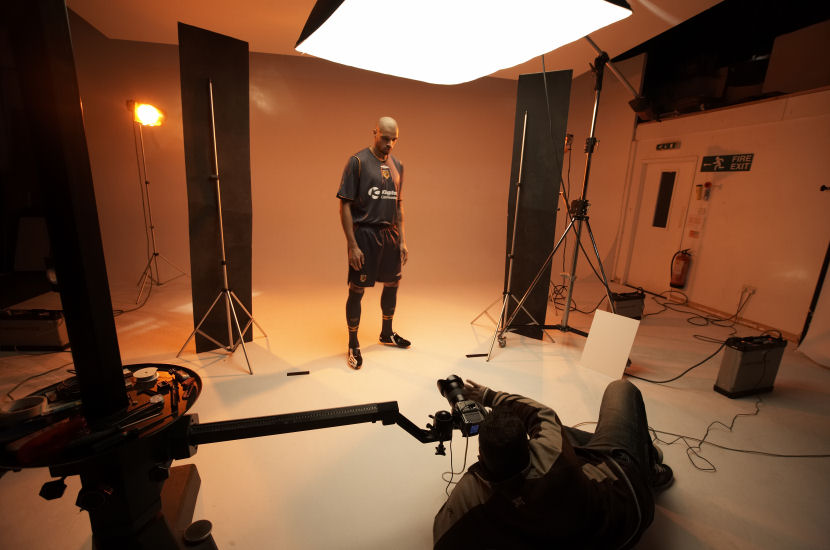 That was the case with the 2008/09 home kit, and on the 20th March 2008, a Thursday, a photo shoot was done to capture imagery for kit launches. At this point the home kit unveiling was over three months away, but the reveal for the ‘flint grey’ change kit was only weeks away, that kit was promoted in the April and went on sale on May 2nd.

Involved in the photo shoot were club captain Ian Ashbee, defensive rock Michael Turner, record signing Caleb Folan and surprising in hindsight, Danish midfielder Henrik Pedersen. Why surprising? Well, because Pedersen would never wear any of the 2008/09 kits in match action, he left the club early in July 2008 citing family commitments that took him back to Silkeborg in Denmark. 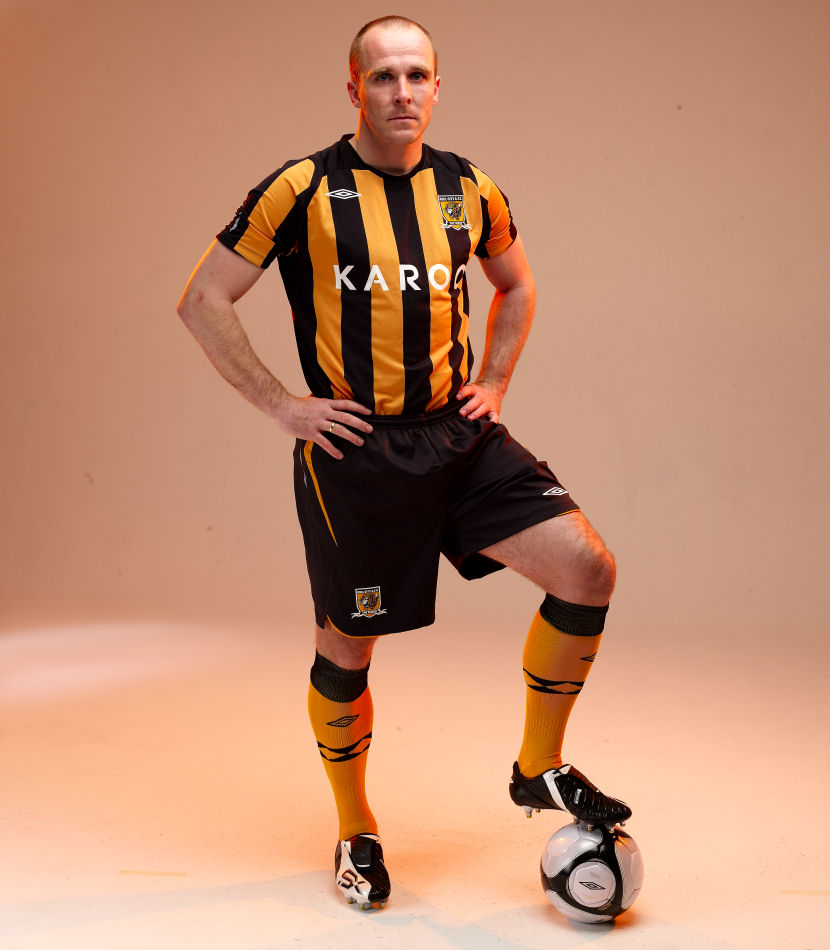 The pictures contain another surprise however. Instead of the black socks with amber trim we are familiar with, the players are wearing socks that are a chromatic reversal: mostly amber with black foldover bands, a thin black hoop containing connected solid diamonds at mid-shin level, and the Umbro double diamond above the hoops.

These socks were never worn in match action, and were not seen on the reveal imagery either, having been Photoshopped to look like the socks used when the season started (here’s the original image of an amber socked Ashbee holding a white board that later had the date of released added digitally) 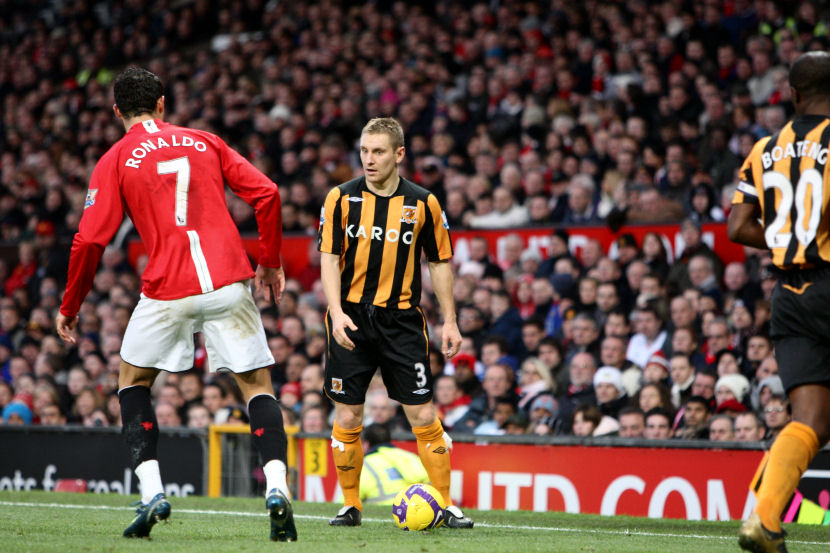 Yet amber socks were used on three occasions with the primary shirts and shorts, but those were of a simpler design than the hose worn in the photo shoot. Those amber alternate socks were self coloured aside from black double diamonds at mid-shin level, and were worn in the 1-0 win at Tottenham, in the thrilling 4-3 reverse against Manchester United at Old Trafford and in a 2-2 draw at Portsmouth.

The reason for the switch from amber to black socks for 2008/09 eludes us, as does use of a distinct sock set as alternates. Perhaps we’ll know when it’s the 20th anniversary of Hull City’s first Premier League campaign.