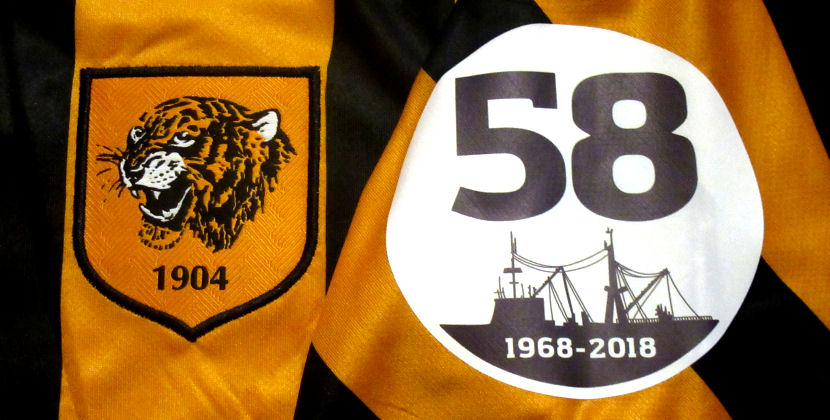 Hull City Kits are delighted and privileged to have been asked by local Trawler memorial groups to help them auction some matchworn shirts. A first batch will go on auction website Ebay this Sunday evening from 8pm.

You may recall that when City faced Chelsea at Stamford Bridge in February, the Tigers wore shirts that (in addition to carrying Emirates FA Cup sleeve patches) featured sleeve patches memorialising the ‘Triple Trawler Tragedy’. 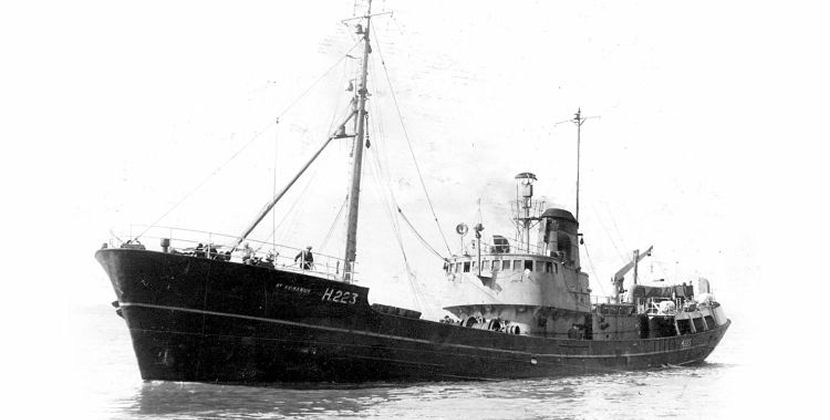 Early in 1968, three Hull trawlers were lost at sea, sinkings that claimed 58 lives and left just one survivor. These events shone a light on the unfavourable conditions and working practices that fishermen had to contend with, and tireless campaigning by the ‘Headscarf Revolutionaries’, widows and family members of the lost fishermen, led to strengthened safety legislation to better protect all who went to sea for a living.

The round sleeve patches that adorned City shirts at Chelsea feature the number 58, representing the number of lives lost in the three sinkings, above the outline of a trawler containing the text ‘1968-2018’, marking the 50th anniversary of the loss of the trawlers St. Romanus, Kingston Peridot and Ross Cleveland.

Hull City have kindly donated many of the shirts (some will have been swapped by players after the game) to the Trawler memorial groups, who wish to give Tigers fans the opportunity to own some of these unique shirts while raising funds to support the work of the groups.

Proceeds from the shirt auction will be divided between the four groups. Not all of the shirts handed to us will be listed on Ebay in one go, a decision was made by the groups to stagger their availability.

Now, let’s take a look at the shirts that will be up for auction this weekend!

Notes: Each shirt features a Trawler memorial patch on the left sleeve (as worn) and an Emirates FA Cup patch on the right sleeve. The name and numbers are player size, featuring the EFL logo and that of the league’s charity partner Prostate Cancer UK. Under the numbers on the back of the shirt is a green, heat bonded applique with the logo of associate club sponsor Burflex Scaffolding.

Kitroom staff typically prepare two shirts per player per game, as some players like to change shirts at half time. If a player doesn’t change at half time, or plays only one half, that leaves an unworn spare shirt that is nonetheless match issued.

Certificates of authenticity have not been created by the club for these shirts, which were simply passed, very generously we might add, to the memorial groups. That many of the shirts are unwashed and have grass and mud stains that can be matched to action photographs from the game is all the provenance that we need as collectors of matchworn Hull City shirts, but we at Hull City Kits don’t feel qualified to issue COAs so will not entertain requests for them. 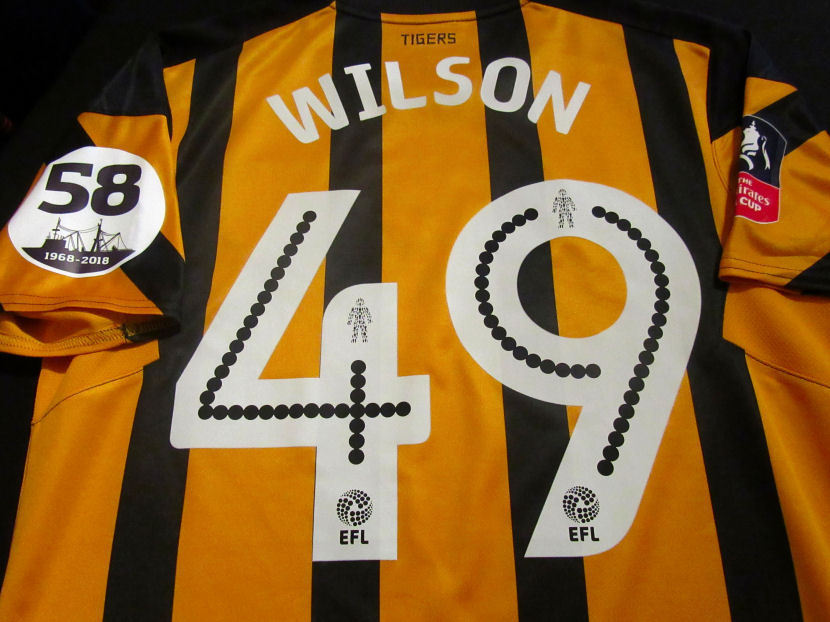 Harry Wilson – No visible signs of game wear, may be a match issued spare. Signed by the player on the back of the shirt. Wilson, a rising star and godsend for City, has really made a name for himself while on loan from Liverpool and on international duty with Wales. He looks destined for big things. 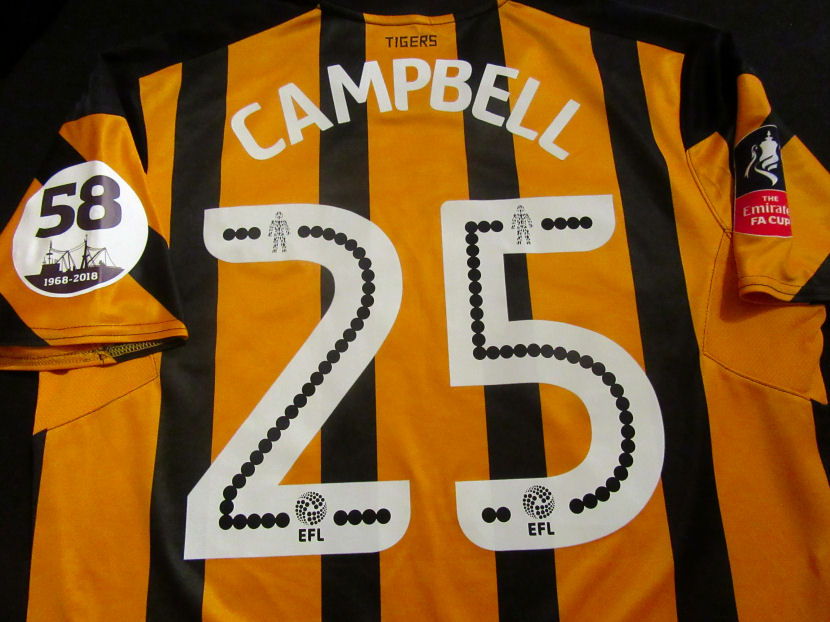 Fraizer Campbell – No visible signs of game wear, may be a match issued spare. Signed by the player on the back of the shirt. Campbell, in his second spell for City, joined the action in the 72nd minute. 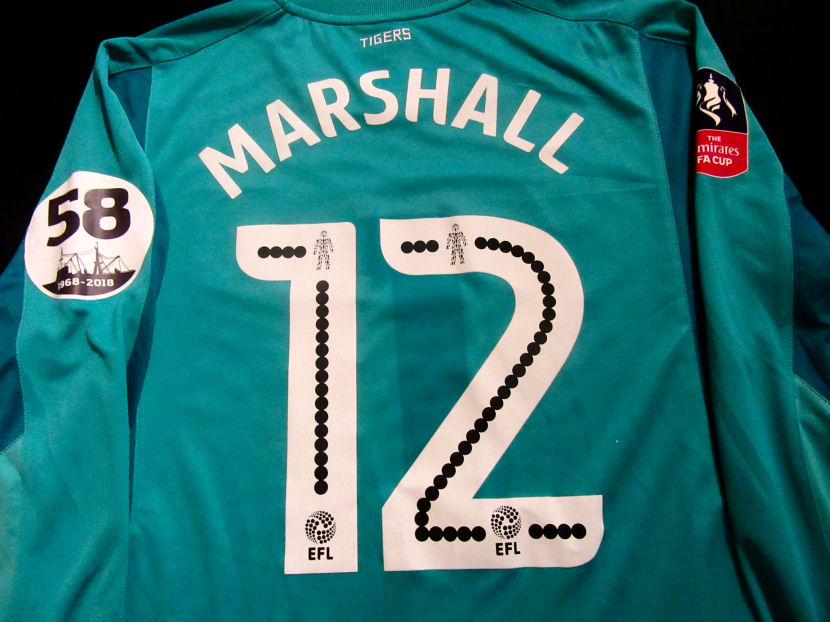 David Marshall – Worn and unwashed, but with little obvious signs of game use. Signed by the player on the back of the shirt. Marshall, a back-up to Allan McGregor for much of the season, was given the nod for the cup tie and played all game. We know this is the jersey he wore because we can use action pictures to photo match a unique property. A number one had been applied to the shirt, but then removed and a number 12 added. Residue from the heat bonded number’s removal remains and can be clearly seen in game action. 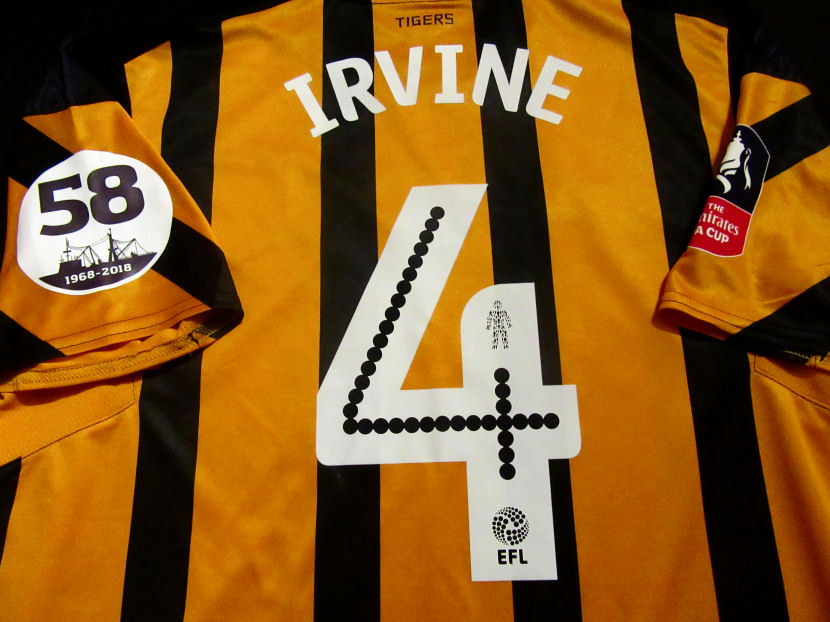 Jackson Irvine – long hair never looked so good! Sorry, couldn’t resist. No visible signs of game wear, may be a match issued spare. Signed by the player on the back of the shirt. Australian international and man-bun enthusiast Irvine started the game, and was replaced on 88 minutes by Daniel Batty. 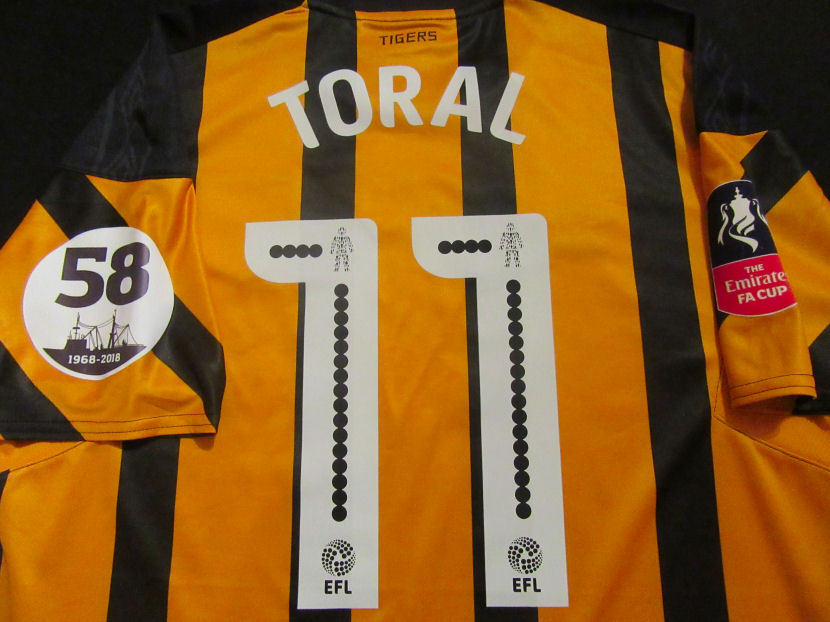 Jon Toral – No visible signs of game wear, may be a match issued spare. Signed by the player on the back of the shirt. Toral, a product of the Barcelona academy, was a substitute who joined the game 55 minutes in, replacing Harry Wilson.

*Disclaimer: Though some of the shirts are clean, that’s not to say they might not pong a bit. All of the shirts were placed in a large bag together, so even the unworn shirts may share a little of the odour of the unwashed shirts. 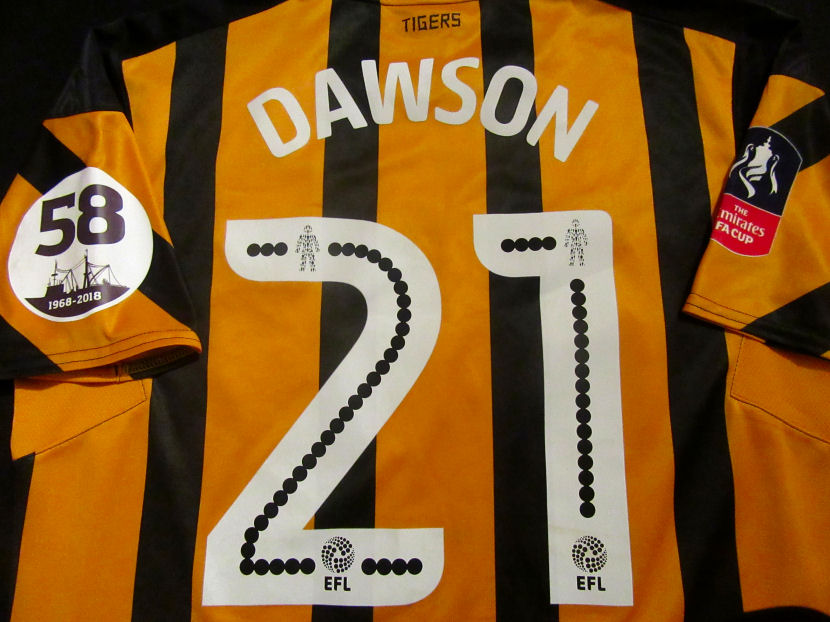 Michael Dawson – Worn and unwashed, with grass stains under the numbers. Signed by the player on the back of the shirt. The Tigers captain played the full 90 minutes. 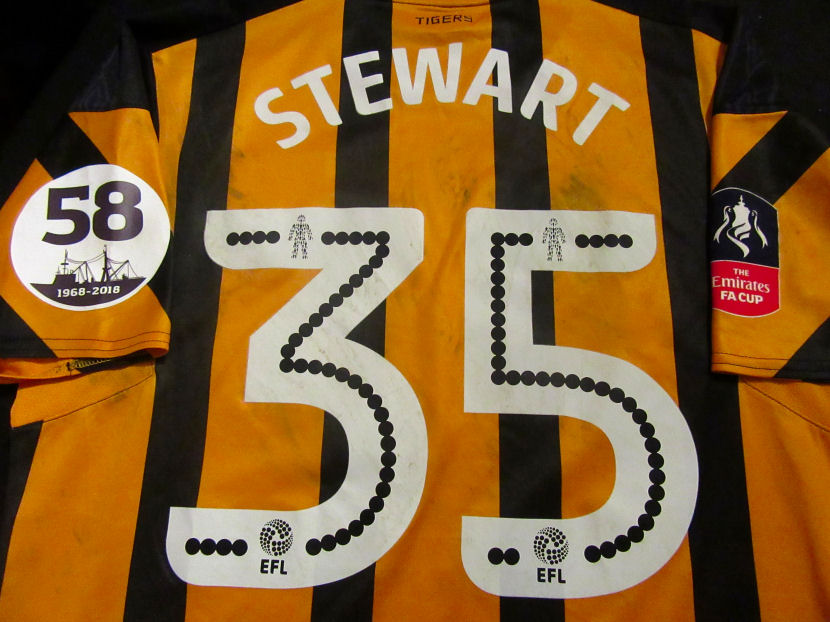 Kevin Stewart – Worn and unwashed, with mud/grass stains. Signed by the player on the back of the shirt. Stewart played the full game 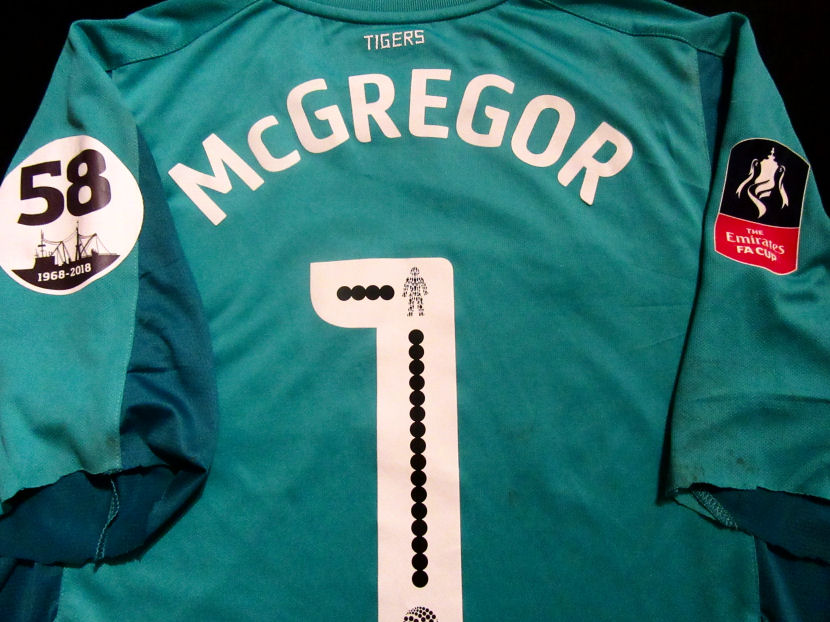 Allan McGregor – Bench worn and unwashed, with mud stains. Signed by the player on the back of the shirt. This shirt is full of surprises, we didn’t expect the shirt of an unused substitute to have any dirt on it, but it seems the back-up keeper for this game wore it during an energetic warm-up and it gathered some Stamford Bridge mud.  Furthermore, the sleeves have been hand cut by scissors. We asked kitman John Eyre about this and he replied “We’ve run out of green goalkeeper shirts in large, so we printed up an XL but cut the sleeves so it fit better.” Unexpected mud and signs of player personalisation? How does that not float your boat?

If you would like to donate to the sterling work of the Trawler memorial groups, PayPal is a good way, paypal.me/trawlermemorial