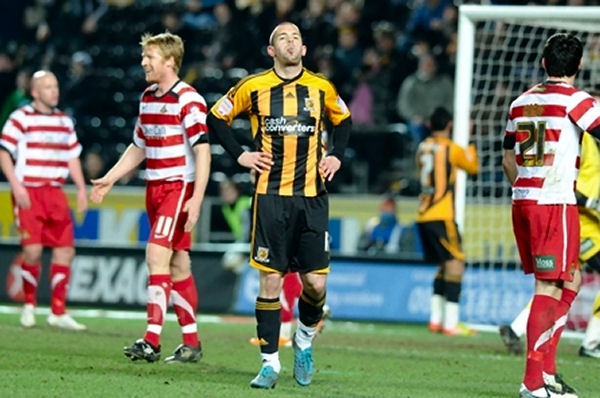 Matt Fryatt displayed both rebelliousness and respectfulness in the 0-0 draw with Doncaster last night.

His act of rebellion was in wearing a long sleeved undershirt on a chilly night at the KC Stadium, though he was not the only one of the starting XI to do so; Aaron Mclean, Robert Koren and Corry Evans all wore yellow long sleeved undershirts beneath short sleeved jerseys, as they have done for weeks. Fryatt’s undergarb however was *GASP* black!

Kitman John Eyre told us a few weeks ago that some referees are more lenient than others when it comes to applying FIFA’s directives about player equipment. Those directives state that “if undergarments are worn, the colour of the sleeve must be the same main colour as the sleeve of the jersey or shirt” and “if undershorts are worn, they must be of the same main colour as the shorts.”

The man in charge of last night’s Championship encounter, referee Mr J Waugh, evidently had no issue with Fryatt’s black sleeves, or Donny ‘keeper David Button pairing black undershorts with yellow playing shorts for that matter. Our ‘keeper Vito Mannone appeared to also be wearing a black undershirt, the sleeves visible as his keeper shirt sleeves were either rolled up or cut off (his undershorts were compliant though, matching the ‘Macaw green’ shorts) and second half sub Seyi Olofinjana too sported black sleeves underneath a short sleeve jersey.

We like this spirit of non-conformism, the black undershirts look infinitely better than the yellow tops and if we can get away with it, then it’s all good.

The respectfulness was shown in the wearing of black armbands to mark the passing of Bob Chapman, who served as City chairman between 1977-1981. Oddly, the armbands were only worn in the second half, and were evidently issued only to the eleven players who would start the second 45 minutes. Neither Seyi Olofinjana or Josh King had armbands on when they were introduced as second half substitutes.