The end of 2019 is in sight, and with it the end of the 2010s, a tumultuous decade for the Tigers that has taken in two promotions, two relegations,  three Wembley trips including an FA Cup final, and a brief European adventure. City have had two outfitters in the Tens, beginning and ending the decade in Umbro, with  four year spent in adidas in between.  Best of lists are highly subjective, so we won’t deign to definitively state which are the best shirts of the 2010s, instead we’ll let three HCK kitgeeks state their own cases for the best primary shirt, change shirt and third shirt of the decade. 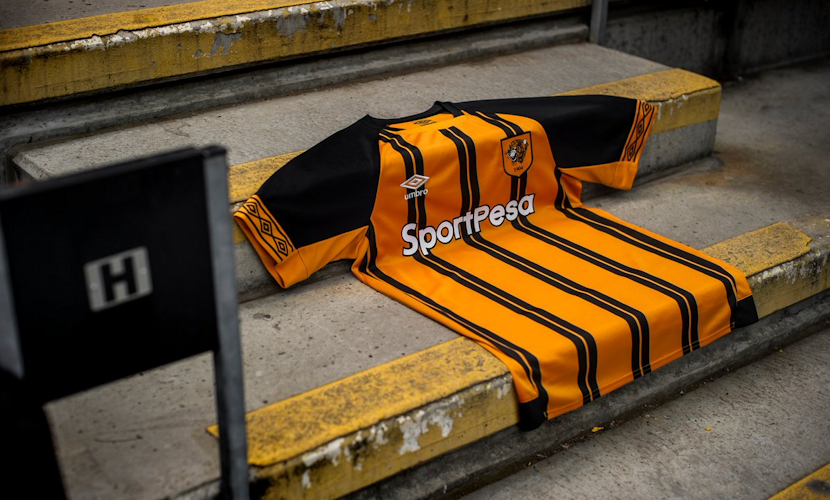 The 2018/19 primary shirt appealed to me from the moment I saw it. I was infatuated by its sophisticated neckline, the smart Raglan sleeves and what seemed like an achingly modern take on our signature stripes. Infatuation though, is a temporary thing, and that intense emotion will either quickly burn itself out, or slowly mutate into something more real, and long lasting. The polyester lust I felt in June 2018 didn’t evaporate, instead it became a deep and meaningful love that endures, and even though it has been replaced by a shirt with appeal to a much wider audience than just Hull City fans (with its contemporary rendition of the infamous 90s tiger stripes), it still has my heart.

Upon release I immediately felt the 2018/19 home was an upgrade on the previous shirt, an impressive feat since I really liked Umbro’s work with the 2017/18 primary. The width of the ‘twin-stripes’ is thin enough to ensure the shirt remains bright overall, important on a shirt with black Raglan sleeves. It took me a while to realise it, but the ‘twin-stripe’ style I had initially thought of as thrillingly contemporary, is actually taken from the vast archives of Umbro. That style of stripes featured on Aberdeen’s away shirt for the 1993/94 campaign, which was black with amber stripes. Umbro have inverted the colourway for Hull City, and as a fanboy of the double-diamond brand and their rich heritage, it gratifies me to see elements of classic Umbro designs used on Tigers’ kit. The angular neckline has its roots in the 90s Dons shirt too, and the amber double-diamond cuff taping echoes the foldover bands on the Aberdeen kit’s socks.

While the world is (quite-rightly) lauding Umbro’s update of Matchwinner’s tiger stripe shirt, I find myself missing it’s predecessor, for me the finest primary Hull City shirt of the decade. 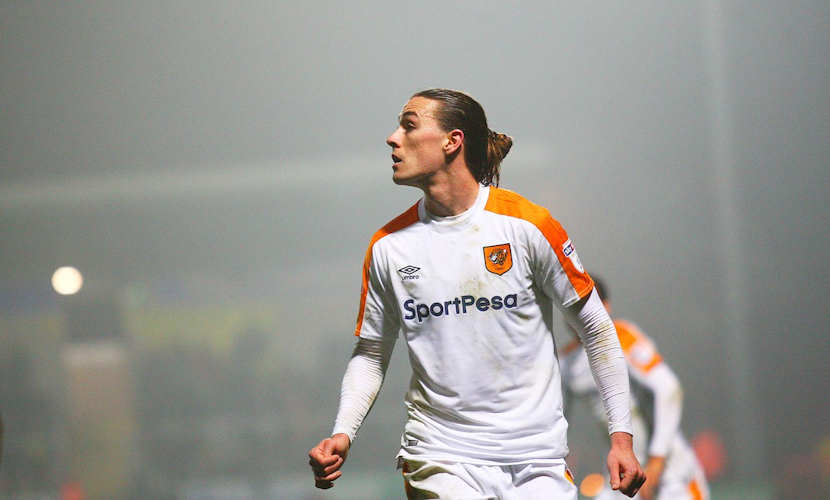 I came very close to choosing the 2018/19 change shirt, a beautiful inversion of the classic solid amber with black trim home shirt from 1965-69, but when it comes to preferred away kit style preference, I’m feeling all-white.

Of the four white away shirts we’ve had in the 2010s, the 2017/18 iteration stands head and shoulders above the rest. The wide amber stripe across the shoulder serves to identify this as a Hull City away shirt readily, and that stripe is embellished with a tonal double-diamond motif, a feature of most Umbro shirts that season. An articulated collar is both crew neck and V neck, creating an intriguing look. 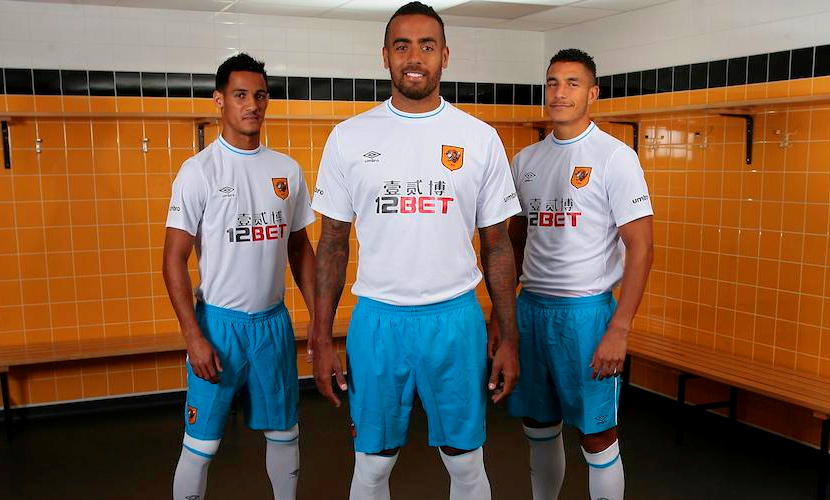 A love of white change shirts informs my choice of top third shirt too. I’ve enjoyed Umbro embracing unfamiliar colours such as cactus purple, navy peony and sulphur spring on third kits, but I’m drawn most to a third shirt of theirs that fuses together established Hull City change colours.

The Tigers wore light blue shirts at home in 1946/47, the first league season after World War Two, when rationing was in effect and certain dyes could not be obtained. Blue dye was easy to pick up however, as it was produced locally by the Reckitts firm. For their centenary year, 2004/05, City chose light blue as an away shirt colour to acknowledge that the first season at Boothferry Park in blue, and in 2011/12 the away shirts were Argentina blue.

Umbro’s 2014/15 third kit, registered as the change kit for UEFA sanctioned competition, was in traditional white and the not unfamiliar light blue. Though I encourage experimentation with third kits, I loved the simplicity of this kit, a simple white shirt with light blue trim on the crew neck, light blue shorts and white socks with restrained blue trim. Glorious. 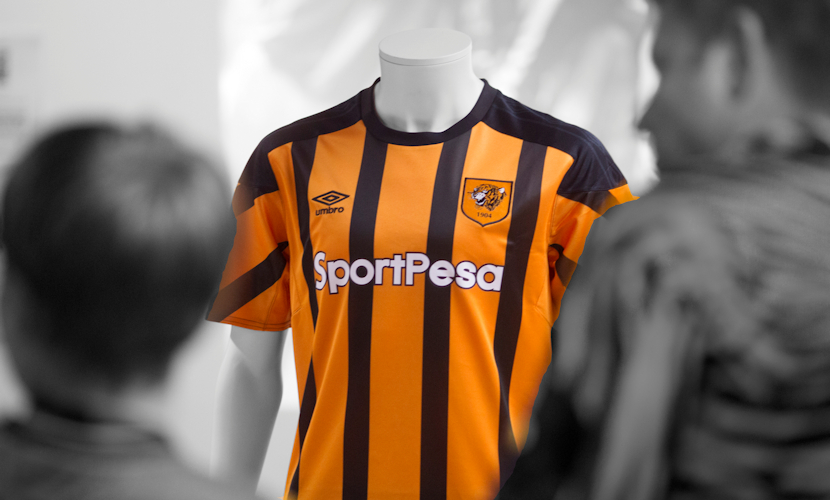 Umbro has done a fantastic job on most of the shirts they have produced for us and this one tops my list for home shirts. The tonal double-diamond taping on the sleeves is a welcome enhancement addition to what is otherwise a clean striped shirt, a traditional Hull City shirt done in the correct way.

I will have two honourable mentions in each category and in the home shirt bracket, they are the 2018/19 by Umbro and the 2013/14 by adidas. The 2018/19 home shirt had a great hidden throwback element with the twin-stripes, which also featured on the 2009/10 away shirt. I wasn’t too keen on this shirt initially but it is one which has grown on me.

If it wasn’t for the horrific club crest then the 2013/14 home shirt may have topped my list. Unfortunately, the badge was stitched on smaller than City’s hopes of keeping Jarrod Bowen, which made the tiger look a bit crossed eyed. It ruined the shirt for me, but it just does enough to sneak into the top 3, featuring the classic three-stripe branding down the arms which was a look I loved to see City wearing. 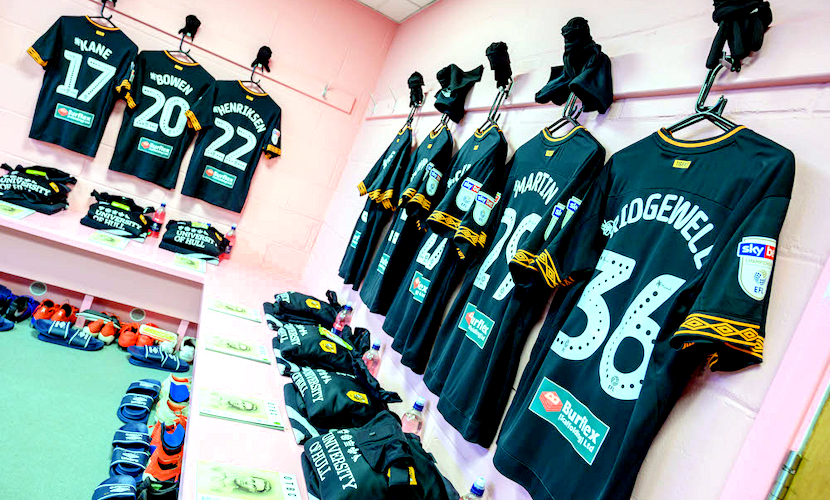 When I looked back on away shirts for a refresher it was hard to look past the 2018/19 change shirt by Umbro. The black colourway with amber trim on the road is one which I enjoy to see. It’s one of the more simplistic styles but that doesn’t take away from its beauty to me.

In the away shirt bracket my two honourable mentions go to the 2017/18 shirt by Umbro and the 2012/13 shirt by adidas. I thought I should have something other than black shirts in my top 3 and the white shirt from 2017/18 has made the cut as it’s beautiful! As you can tell I love the taping Umbro add to their shirts and the 2017/18 shirt has this hidden within the amber as a jacquard weave.

The 2012/13 away shirt is like 2018/19 change shirt black with amber trim. The one thing keeping this shirt down is the sponsor. I know I probably shouldn’t mark it down because of this, but I do. There was something about amber three-stripe branding which turned me on though! 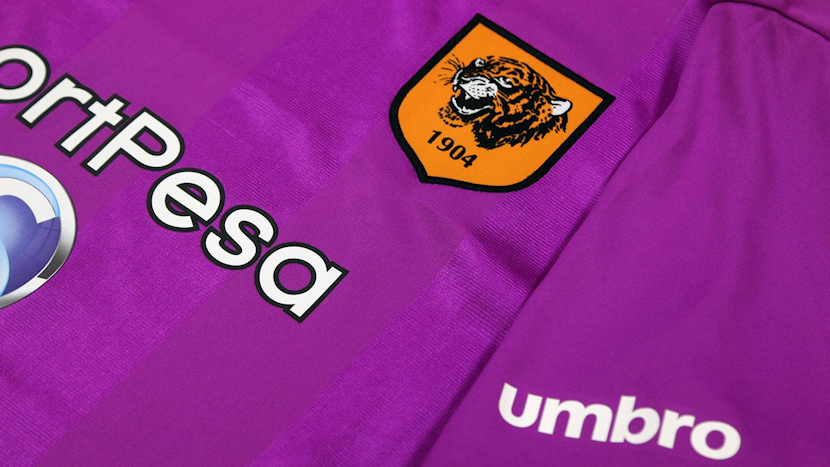 Everyone knows I love a pink shirt (everyone? – editor) and the closest we’ve had at Hull City is the cactus purple shirt, which Umbro revealed as our third shirt for 2016/17. Third shirts should have something a little bit out there about them and this one certainly does. The striking colour has no connection to our identity but I love it!

Honourable mentions for third shirts go to the 2017/18 and 2019/20 third shirts, both by Umbro. I imagine the 2017/18 third shirt would feature high on everyone’s list, and mine isn’t any different. The tiger print Jacquarding on the front of the shirt quite possibly paved the way for the 2019/20 home shirt too!

Rounding out my list is the 2019/20 third shirt. The deep lagoon coloured design pays homage to the Boothferry Park days with a colour seen on the old ticket office hut behind the South Stand, at least some emojis on the Umbro Twitter feed half confirmed this.

We have had Umbro as our technical partner for most of the decade and I think it has been a really good ten year period for Tigers’ kits. Here’s hoping for another strong decade of Hull City Kits, both on and off the pitch. 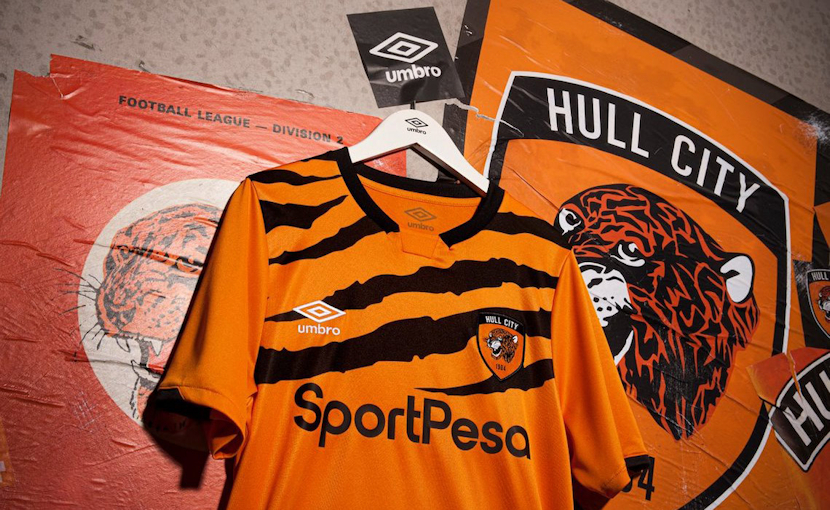 Of the three shirts to pick, the home was the hardest choice for me. This seasons shirt stands out though, for its  1990s retro look and the execution of modernising a classic which is done so well, Umbro have been fantastic for us, and I can’t think of any examples of bad shirts they have made for City, but this has the throwback look, has a badge with our name on, the fit is brilliant and the SportPesa wordmark is sympathetically positioned. All of those things add up to the best home shirt for me. 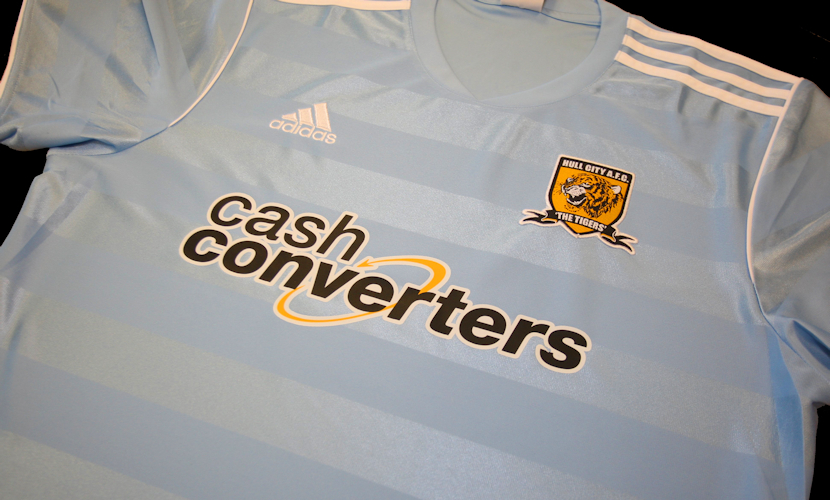 This choice was a close call, as I was never a big fan of the kits in the years we had adidas as supplier.  I was hugely excited when the adidas deal was announced but that largely turned to disappointment for me, I thought most of it was just horrendous. The only two shirts that they did well in my opinion were the black away from 2012/13, and this lovely Argie blue shirt that was pleasingly used as a third shirt when it was done as the away. I probably mention on every Kitcast that I’ve got a real thing for this shirt, maybe it’s because there were several versions of it, but it’s the one 2010-2014 adidas shirt I really love and one of my go-to picks for match days. 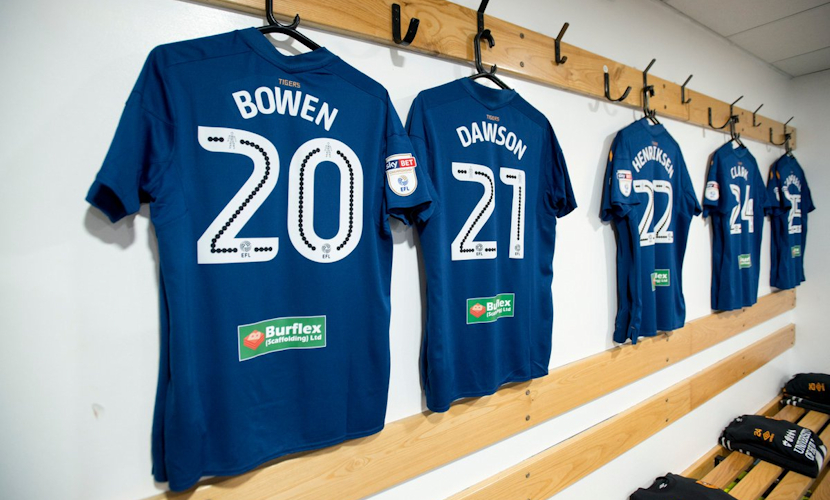 This is absolutely beautiful. The colour and the subtle tiger print weave by themselves would have made it a great shirt, but the sponsor and supplier marks being in amber enhance it even further. This is definitely the best third shirt we have had, and my only regret about it is that we didn’t have it as an away shirt one season and re-use it as a third shirt the year after, as we did with the Argie blue shirt. It deserved to be used for more than just a handful of games in one season. Those are the kitgeeks choices, what are yours? Comment via @hullcitykits on social media.