The 2012/13 adidas home kit was revealed at 6am this morning, and HCK’s JGHull and SombreEthyl forwent another hour in bed and battled eye-blear to offer their initial thoughts… 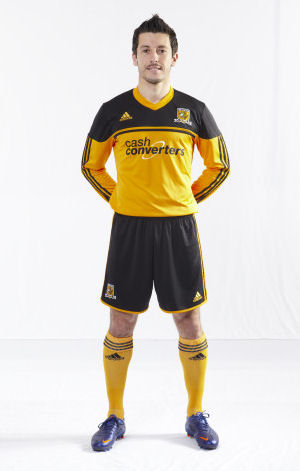 I’m finding it hard to get overly excited by the new kit as it follows a template, the adidas Autheno 12 design.

I probably feel that way fundamentally because I’m a stripes man and this is a plain shirt, but also because this kit’s template exists on sportswear sites for Sunday League teams (such as here for example, thankfully it isn’t available in  amber and black) means it feels a bit less special somehow.

I’m pleased the sponsor is ‘cut out’ and whilst I wish we had a different sponsor,  it looks as good as it can do with the same ‘cut out’ applied to last year’s away shirt (eventually). The sponsors patch is bigger this year but the lack of patch means the new size probably won’t be noticed by most. The collar on the kit is a V which is better than any flappy collar or round neck but it might just be a bit too chunky. Whilst not as pronounced as the Liverpool kits of the mid 1990s (also made by adidas), it looks quite “fat”. Hopefully it’s one of those things that look better in the flesh.

The shorts don’t appear to be massively different although I suspect they are subtly somehow to ensure supporters want to update to the latest ones. I wonder if we’ve got any amber change shorts this time out?

One highlight for me is the amber socks – they simply look better than black! In saying that, I suspect with the away kit being black, we’ll match away socks with home shirt at some point in the season. I’m really looking forward to seeing the away kit.

Will I be buying one? I’ll not be at the front of the queue but suspect I’ll pick one up at some point – I’m a kit geek and *need* one – but at the moment, I’m not sure this shirt will ever be properly loved. 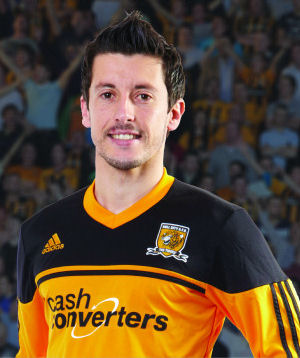 Typical, I bemoan us using the same template as Stoke two years in a row, then when we don’t, Stoke unveil a gorgeous design I’d be happy to see reproduced in amber and black.

I would have preferred stripes again but given that 6 out of the last 8 home shirts have been striped maybe it is time for plain shirt proponents to get their way this time.

When I first saw it I thought it looked like the Starfleet uniform Worf, Data and Geordi wore in Star Trek: The Next Generation. It’s a design I’m warming to though, even if I find the sponsor too unpalatable to wear myself. Maybe I could boil wash the sponsor wordmark off, it certainly looks easier to remove than the monstrous patch on last years home shirt and I’m thankful we’ve not made the same mistake twice.

I’m not as sniffy as some about templates because I think most kits have followed templates to some extent, Wolves and City wore pretty much the same kits in the late 50s, the 60s and 70s. Most adidas 80s kits we consider classics now were the same basic kits in different colours or with different team specific detail. France ’84? Ipswich just added a sponsor and a horse. Holland ’88? The Soviets wore the same shirt in red and later West Germany wore a green version, template use is far from a modern phenomenon. I don’t like City consecutively using the same template as another side but does it bother me that Middlesbrough use this design for their away kit? Not in the slightest.

The announcement that a fan who takes a photo of themselves wearing the new shirt will get a squad number made me roll my eyes. A few years ago Bryan Hughes had his wages doubled but was told months later he’d not even get a squad number, now you can get one by spending £45 and posing for a picture, squad numbers have lost their cachet it seems. It perplexes me that the club don’t use adidas to organise launches more than they do.

Sponsor aside, this is a decent enough kit. I like the use of amber socks to brighten up the overall kit, they had to be really since the away kit is going to be all black and presumably there will be amber alternate shorts again that will be interchangeable with both home and away shirts. For the last two years adidas have done a better job with the away kit than the home and I think that will prove true for a third time when we see the change kit, but this home kit is alright, and I think it’ll grow on me.

A team bus of a different stripe Stranger than fiction: Exito design concepts
Scroll to top