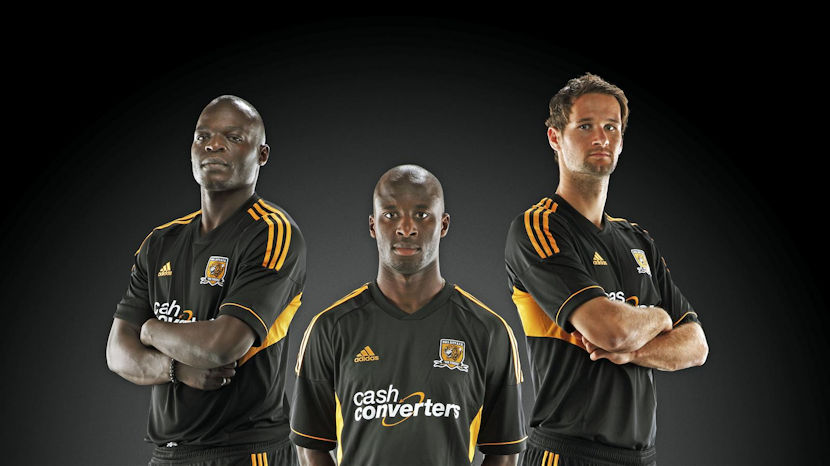 The 2012/13 adidas away kit was finally revealed this morning and goes on sale Friday. HCK’s JGHull and SombreEthyl  offer their initial thoughts…

@SombreEthyl: I’ve liked all of the away kits that adidas have produced for City, but this is by far the best. It’s simple and unfussy, sleek and a little bit sexy. I’m in favour of wearing your primary colours as often as you can away from home to put the club’s visual identity on show when on the road. The beauty of having a black away kit is you can wear it as many times as you like and you’re still showcasing black and amber (or amber and black, that was the order it was always described in when I was growing up).

The 2003/04 black away kit was sometimes worn just for the sake of it rather than because a colour clash necessitated it, at Rochdale, at Swansea, at Yeovil (in which it became a truly iconic City kit) but there was little complaint, because it looked good and was still our regular colours, albeit in reverse order.

In 2010/11 we mixed and matched elements of home and away kit and it didn’t look quite right as the shade of amber on the away kit was slightly deeper than on the home to contrast better with the white. With this kit, kitman John Eyre can mix and match all he likes and it’ll still look fine, we’ve already seen City wear the alternate amber shorts in pre-season, I’d not be averse to pairing amber shorts with the black shirt and socks on occasion (such as at Sheffield Wednesday or Bolton). I’m also happy that a black away kit means we retain the Argie blue away duds for another year as the 3rd kit.

If I’m being really picky, the shirt collar is a bit drab, I’d have liked some contrast amber on it (I’ve always favoured this style of wrapover collar) but it really doesn’t matter. The only real caveat is, as expected, the sponsor, but in this case it wouldn’t put me off buying one, which speaks volumes about the kit. If anyone discovers the right washer temperature to get the sponsor to peel off, do let us know, in the meantime we can always stand cross-armed like Faye and Proschwitz in the launch photo. Verdict: Awesome.

@JGHull: Initial thoughts are that the shirt looks ace. I’m a white away kit man really (with the adidas all white away kit from the first year of our deal with them being a beauty) but as a periodic break from tradition, this gets my approval.

The amber panelling under the arms looks to finish short of the back panelling so assuming the back of the shirt is plain black, there isn’t much to not like. Stylish? Yup. Maintaining tradition? Well, not quite, but it’s amber and black, so sort of yup. Designed so it’s usable as a genuine away kit? Yup. As SombreEthyl says, it would work with the amber shorts so it gives kit guardian Eyre a full range of options of which all get my thumbs up.

Whilst the sponsor is dreadful at least this time around it’s been tastefully treated and actually designed into the shirt rather than slapped on. It’s worth repeating again – we’d really like to know the optimum temperature for the sponsor to peel off without destroying the shirt. I feel an experiment coming on…

Lastly, the artwork launching the away kit is a vast improvement on that which launched the home version. The bleached and poorly cut out work which launched the home shirt (and is still visible on club websites) is not the right way to introduce a kit to the world. A black kit is moody and mean and backlighting the players in this way enhances the kit launch.

I want one. (sans sponsor)