A look at the best, worst and current kits of City’s forthcoming opponents

Aside from adopting Catford South End’s two tone blue kits in 1923/24 (the two sides considered a merger at one point), Charlton have consistently worn red and white at home since borrowing a set of kit from Woolwich Arsenal in 1905.

There’s not been much consistency with ‘The Addicks’ away colours though, they’ve mostly cycled through white and red (a reversal of the home kit), royal blue, all yellow or black in the last 30 years, with a few other styles thrown in too. We’re unlikely to see Charlton’s current away kit when they visit the KC Stadium in February, it’s all black, but let’s consider the aesthetic qualities of that and previous change kits for the Valley dwellers.

Charlton’s kits were twice made by adidas during the 80s, from 1980 to 1983 then between 1986 and 1988 after a three season spell where the Addicks were supplied by little known brand Osca. The German sportswear giant provided all yellow away kits at the start of the decade but introduced blue as a change colour when they resumed technical sponsorship in 1986/87. The all blue away kit (though at that point all games were played away as they were forced to share Crystal Palace’s Selhurst Park) had a look of ‘Manchester United third kit’ about it but was lovely nonetheless. The shirt featured a wrapover V-neck collar, a diagonal stripe shadow pattern and the club badge picked out in white stitching.

Try as we might, we can’t find an image of that kit, so we’ll look at the next time Charlton used all blue away. The adidas kit, used for two seasons, lastly in 1987/88, evidently had some impact with the club and fans, as they introduced another all blue outfit two years later, for 1989/90. By then, Charlton had switched to the Admiral brand, their tendency in that era was to use the same design of the home kit, just changing colour. 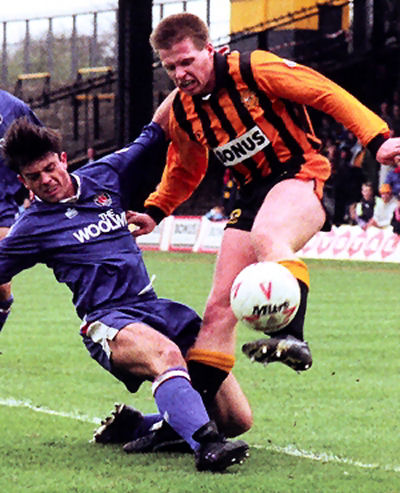 The shirt then, like the home strip, had a round collar with black and red trim, and a chequerboard  shadow pattern. The chequers were smaller on the shorts, which had a white stripe on each side that was punctuated with a diagonal red band. The blue socks carried the Admiral logo at shin level and had a red tipped white stripe across the foldover band. Whereas the adidas shirt picked out the Addicks badge in just one colour, this kit had the Charlton crest in the club’s red and black, though only on the shirt, no badge appeared on the shorts. The club, still at Selhurst Park at this point, succumbed to relegation from the top flight in 1989/90 and faced City in Division Two in 1990/91. Charlton wore the blue kit in a 2-2 draw at Boothferry Park.

Honourable mention: The 2000-02 Le Coq Sportif away kit was designed so that each item was interchangeable with parts of the the home kit. The French firm created an Inter Milan-alike 3rd kit too for 2000/01, but this was the best of three kits that season.

There are several candidates for worst Charlton away kit, and all are produced by Quaser, the now defunct company that was once endorsed by Gary Lineker. Quaser produced kits for the Addicks between 1994 and 1998 and their first away kit was relatively traditional, white shirt with two chest bands, one red, one black, black shorts and white socks. In 1995 though it all went a bit mental, tradition went out of the window and Quaser decided green and purple were now Charlton’s away colours. They introduced this as a 3rd strip… 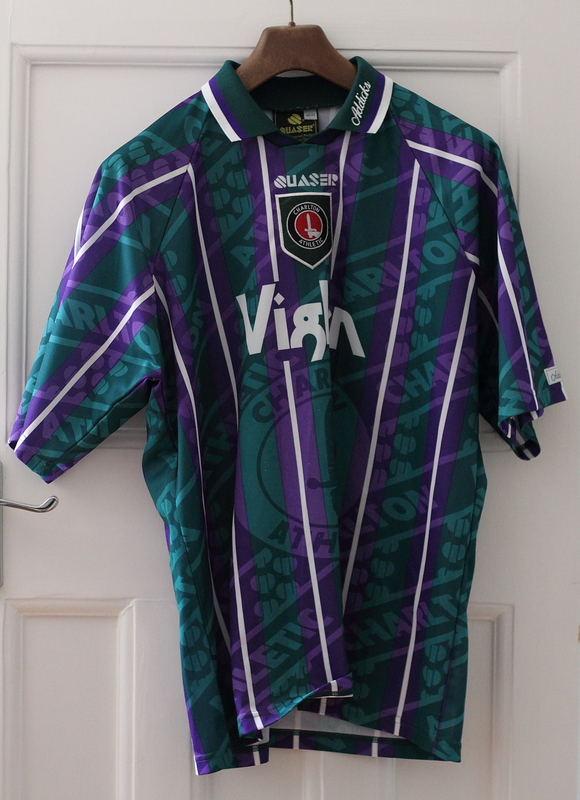 It was paired with purple shorts and green socks and used for 1995/96 and 1996/97. Crikey. Once again we struggled to find images of a Charlton away kit in action, maybe it cracked lenses as they tried to snap it.

Dishonourable mentions: Follow up Quaser away kits were at least equally dreadful, they stuck with green and purple in 1997/98, adding those tones to white. The same year they had a 3rd kid that was dark green and white with red trim. The hoopy nature of the shirt gave it a lower division rugby league feel.

Charlton have switched to Nike for 2012/13, and though it would be easy to dismiss their new kits as Sunday League teamwear catalogue stuff (and they do have a whiff of that) the new gear is at least tasteful. The away kit is all black, with no trim colour apart from a white swoosh and the club logo on the shirts and shorts (plus white sponsor on the shirt), whereas the socks are topped with white with a chevron/swallow-tail white stripe an inch or so underneath the black. 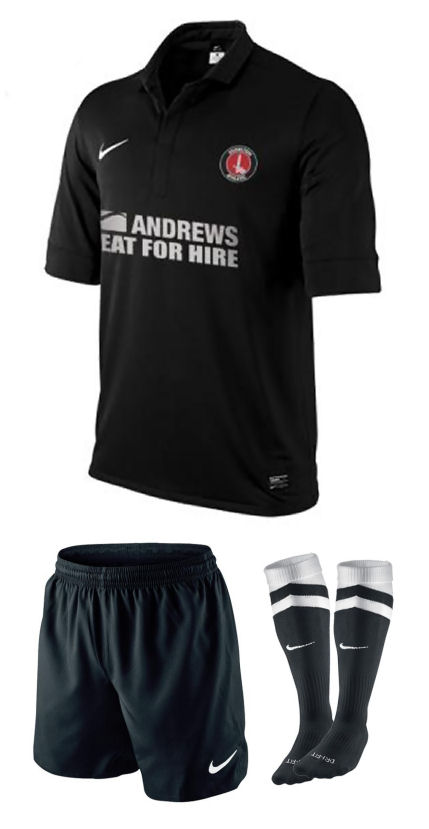 The shirts have a long, thin placket underneath a small turnover collar, similar to what Nike have given recent France shirts. Charlton have ditched Macron who usually overdesign kits, but they produced relatively sober affairs for the Addicks, though that large logo on each sleeve never looks good.

Tigers to debut away kit at The Valley
Scroll to top