Chris Chilton’s record haul of 222 goals for Hull City is unlikely to ever be surpassed, but ‘Chillo’ is so much more to Hull City than his goalscoring stats. He is a golden thread in the tapestry of club history, one that extends far beyond his first team playing career for the Tigers which began in 1960, as he gave over three decades of service to the club, becoming a coach at City in 1978 and developing the raw talents of Steve McClaren, Brian Marwood and the inimitable Billy Whitehurst. Three times he served as caretaker manager and later he became assistant manager to Brian Horton, until 1985 when his formal association with City came to an end. He will however, forever be associated with Hull City A.F.C. as an undisputed Tigers legend. 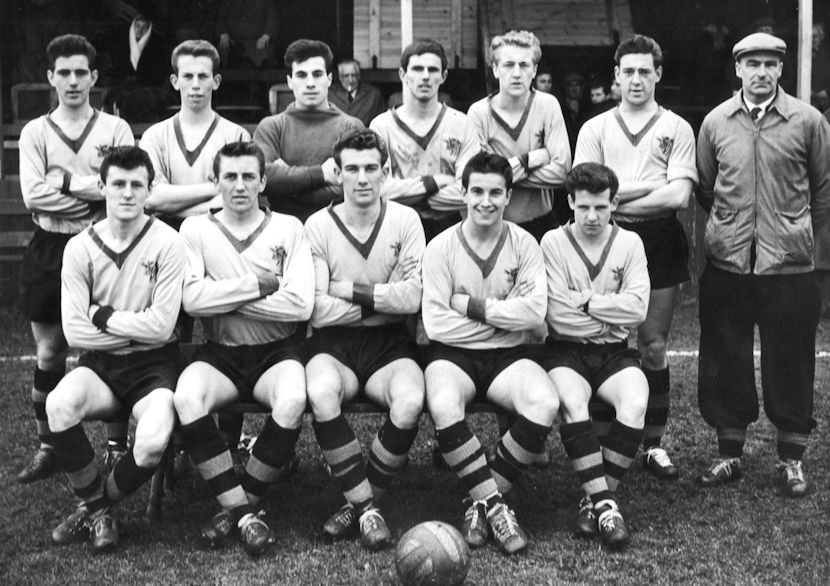 This photograph dated ‘1962’, shows Chillo wearing the Umbro ‘continental’ playing kit used between 1955 and 1962, with black socks topped by amber for five seasons and hooped socks for the final two . Though it appears to show Chilton with the reserves, he had already become a first team regular having made his debut in October 1960. 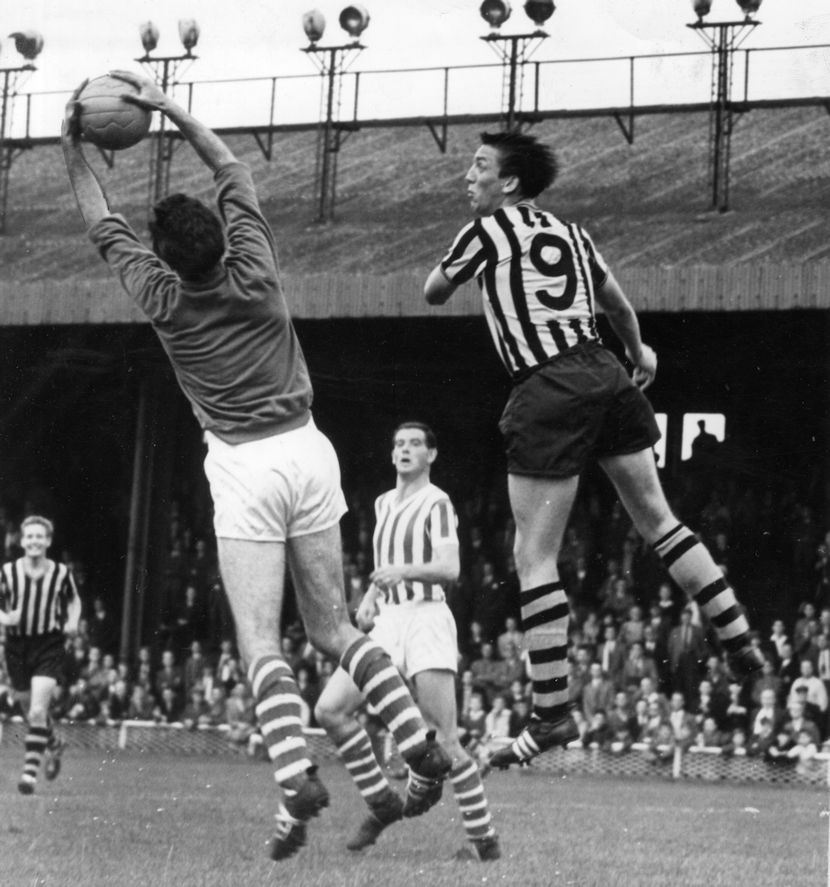 City’s mid-Sixties Third Division title triumph and the exploits of Waggy and Chillo in solid amber shirts means we associate that style of shirt with that decade, but there were three distinct striped shirts in two seasons of the early-Sixties. This photo shows Chillo challenging the Bristol Rovers keeper on the opening day of 1962/63.  Check out those thin stripes, glorious hooped hose and sewn- on amber patches for increased number legibility (something last seen on a City shirt in 1992). Chilton scored 23 goals in all competitions in 1962/63. 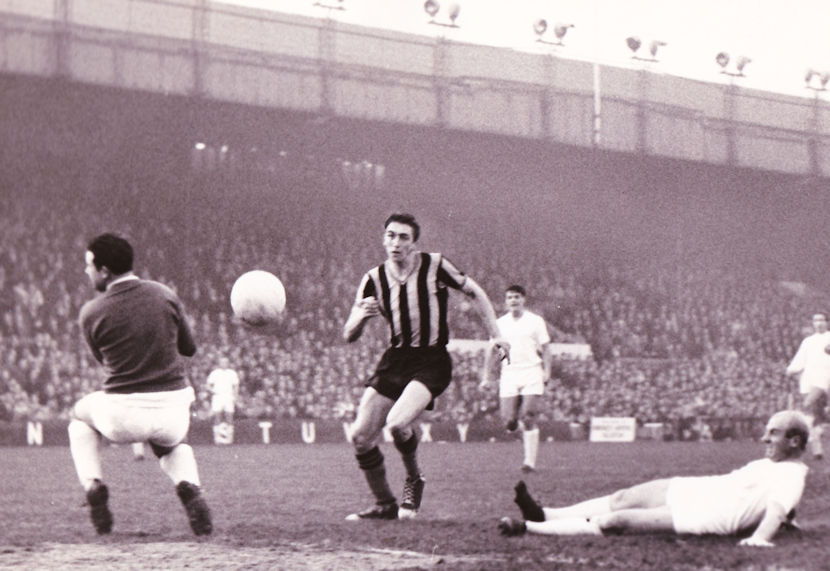 City went with thicker striped shirts with a black central stripe at the start of 1963/64, and ditched the hooped socks for amber hose with black turnover cuffs and two amber stripes. The socks would see out the season but for a reason we’ve never found an explanation for, City swapped out the shirts at the start of 1964, going for very thin black stripes and an amber central stripe, but essentially the same V-neck as the shirt being replaced. Here’s Chillo on Boxing Day 1963 when the Tigers hosted Mansfield Town. 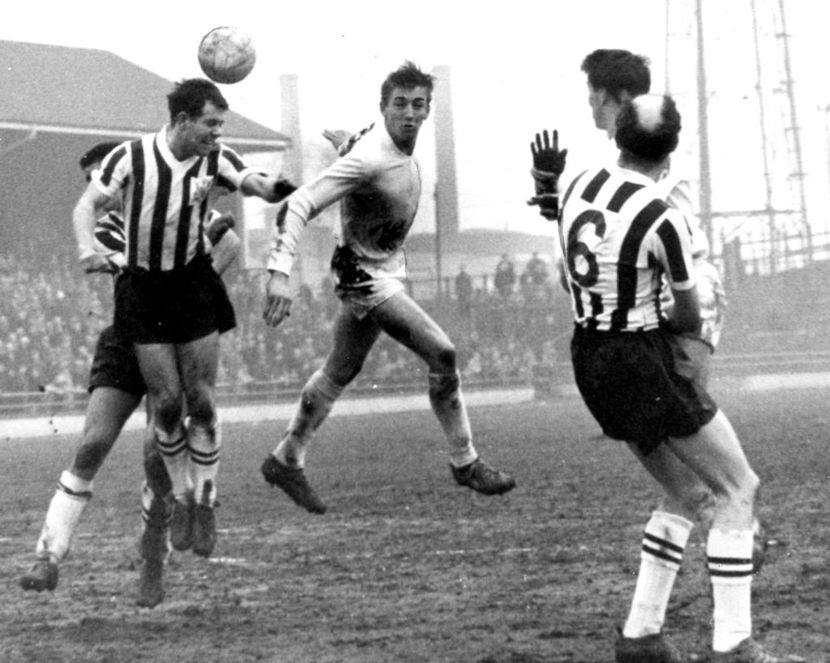 Leeds claim to have been copying Real Madrid when they changed their home kit from blue and yellow in 1961, but we suspect they were swayed by seeing how ace City looked in their traditional all-white change kit. Here Chillo heads for goal at Notts County in January 1964. 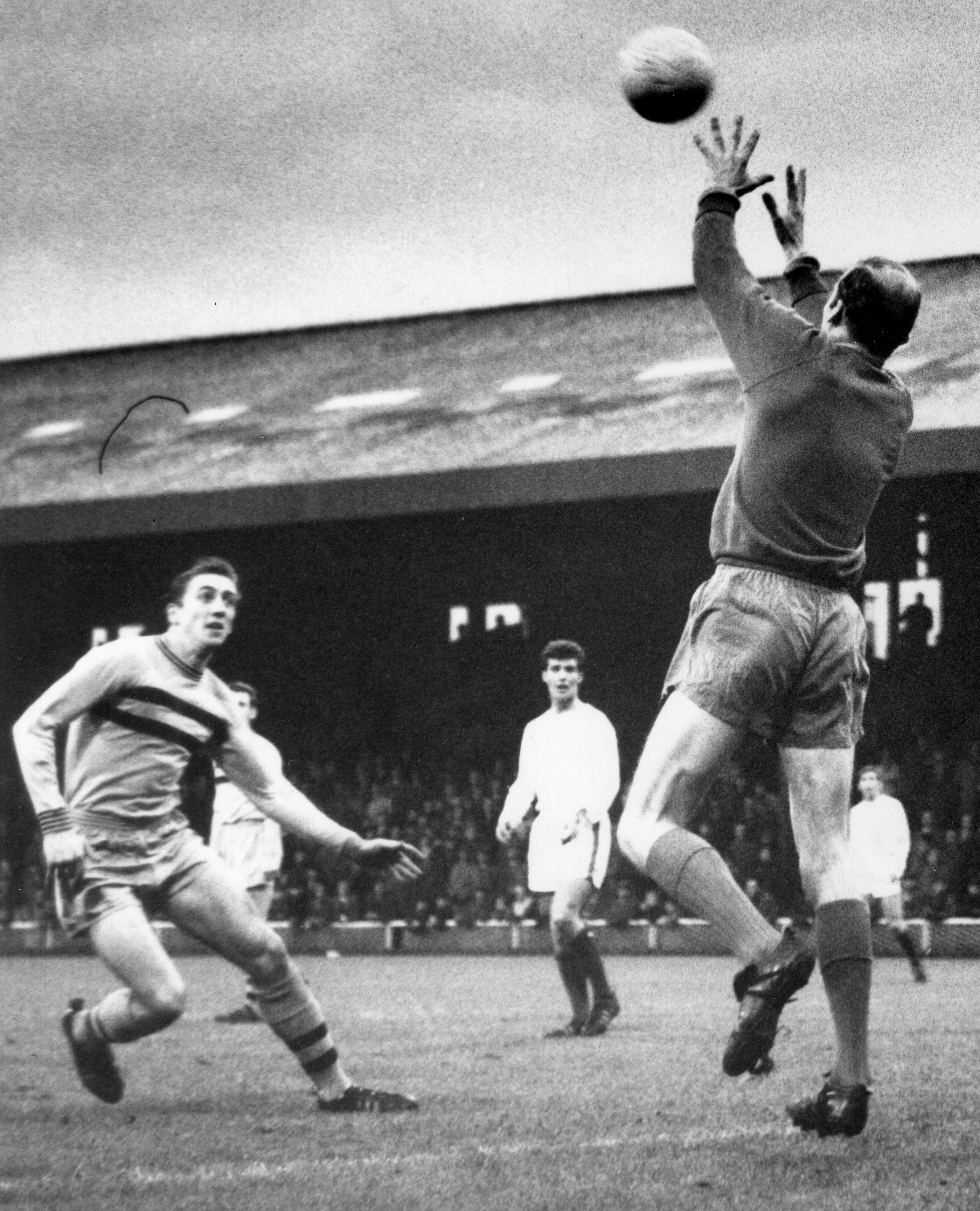 The Tigers embraced the early-to-mid-Sixties trend of monochrome kits in 1964/65, following the lead of Liverpool, Chelsea and Coventry who all matched their shorts to their shirts. Despite the lovely twin-banded shirts, the all-amber look did not go down well with City fans, and the kit was abandoned after just one season.  In this pic, Chillo watches the Watford keeper gather the ball in December 1964. 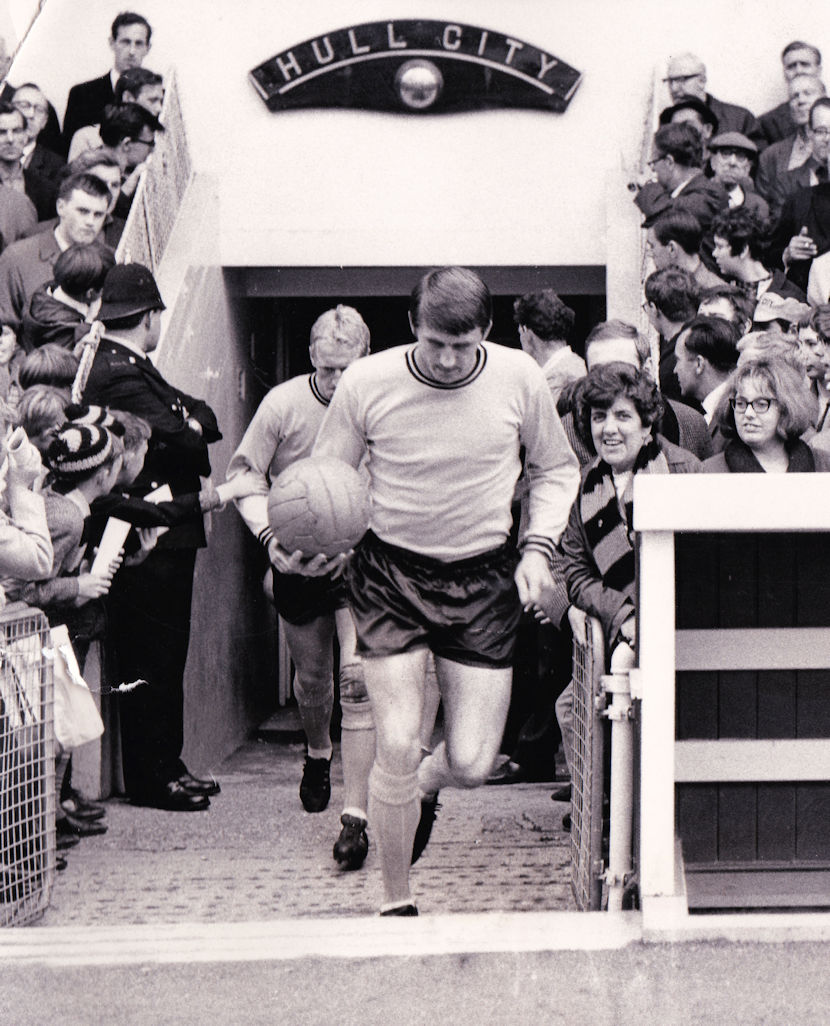 This is the look most associated with the Sixties: solid amber shirts with black trim crew necks made by Bukta, with black shorts and amber socks.  It was worn between 1965/66 (the season City won Division Three) and 1968/69. Here Chillo emerges from the Boothferry Park tunnel in August 1968, by then the Tigers had swapped out the socks on this kit, for 1965/66 and 1966/67 the hose had discreet twin-hoop trim on the foldover cuffs, but from 1967/68 the socks were solid amber. 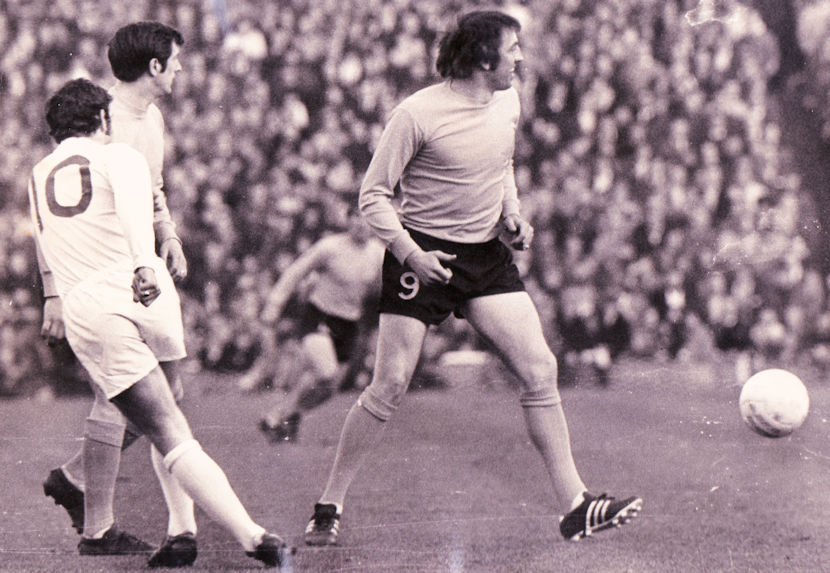 Chillo’s tenure earned him a Testimonial season, the climax of which was a game against a Leeds United XI on the same night the visitors learned that Arsenal had pipped them to the Division One title. Already plain kits became plainer still in 1969 when new shirts dispensed with the black collar trim. This set of shirts had tigerheads applied over the heart but then removed after an evident change of mind, leaving behind a residual ‘ghost tiger’ only seen close up. 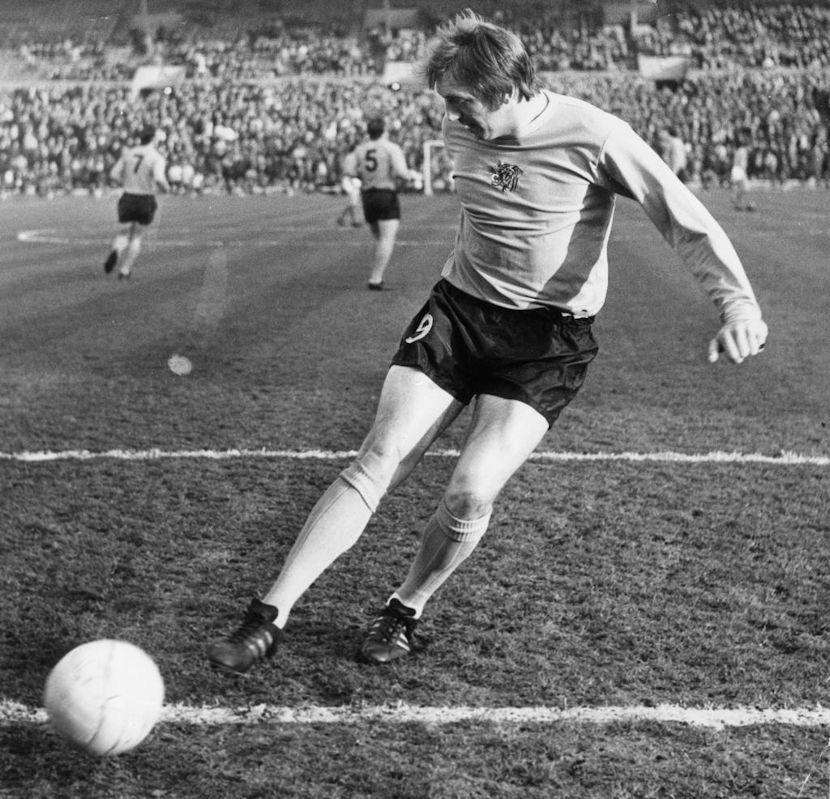 Another set of the 1969-72 home shirts had the tigerhead crest sewn onto the shirts centrally, as seen here as Chillo gets some pre-game shooting practice in. By the time this kit was retired Chillo had moved on, joining First Division Coventry City in August 1971 after 477 appearances for the Tigers. 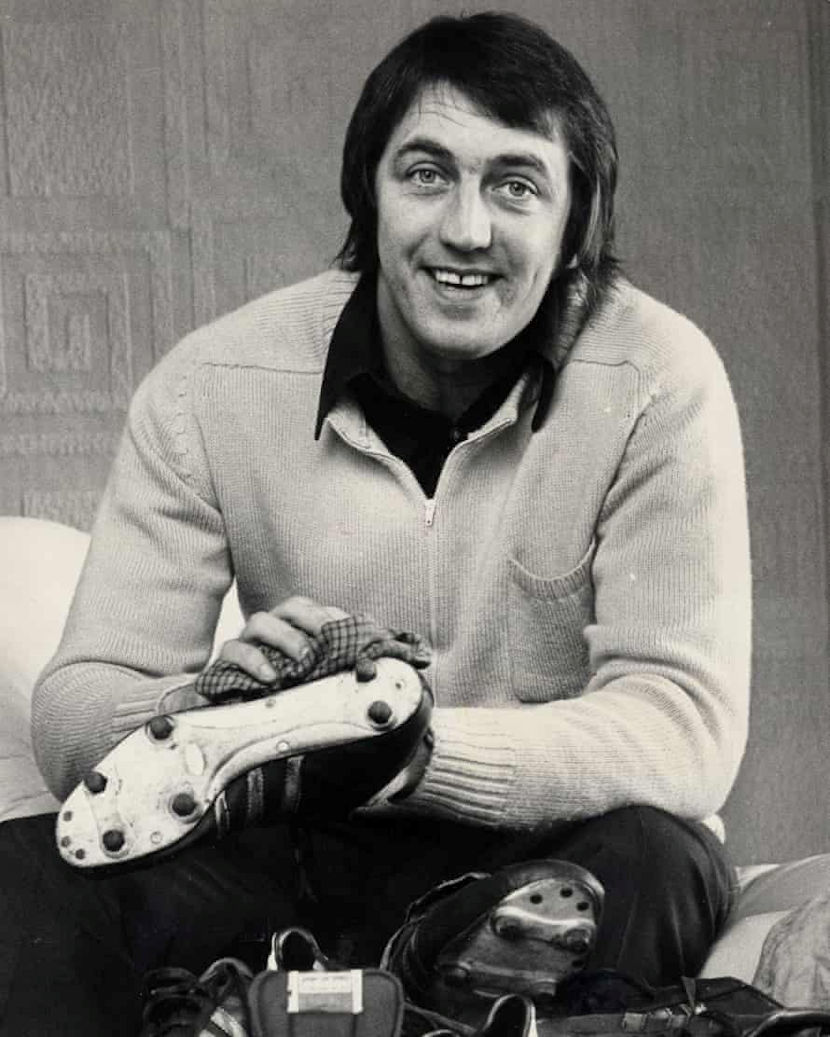