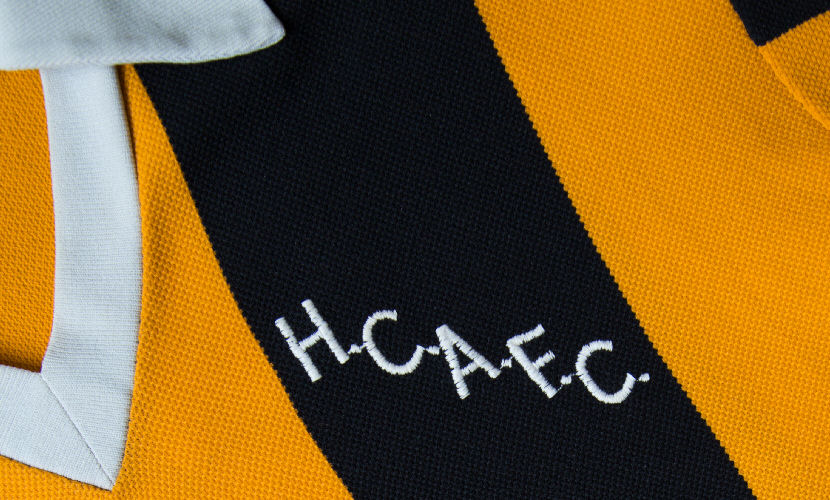 Amber and black – The colours of culture

A group of lifelong football fans have worked together to ensure their beloved Hull City plays a part in the UK City of Culture 2017 celebrations.

The group are putting the final touches to plans for an exhibition of classic Tigers’ kits, which will go on display from Monday 3 July.

Tiger Rags – The Fabric of Hull City AFC will run from Monday July 3 to Tuesday October 2 at the Streetlife Museum of Transport. Entry will be free.

Les Motherby, author of the Hull City Kits blog and an avid hoarder of memorabilia, has brought together a number of local collectors to exhibit their prized player worn shirts, on public display for first time.

He said: “Hull City may not have a glorious, trophy-laden past, but they have an interesting history regardless, one that means a lot to Tigers supporters.”

“Shirts worn by players are the ultimate physical representation of that history, they evoke memories of past players, games and seasons.”

“Hopefully the club will have their own museum one day but until then this exhibition, part of the Creative Communities Programme for Hull 2017, offers a chance for people to celebrate the visual identity of Hull City.”

Councillor Terry Geraghty, Portfolio Holder for Culture and Leisure and Chair of Hull Culture & Leisure, said: “Over the years Hull City have grown to become an integral part of the fabric of the city and its identity. The club is loved by locals and recognised all around the world.

“We are delighted to be working with Les Motherby by hosting the Tiger Rags exhibition, an individual Hull 2017 community project, at the Streetlife Museum, enhancing the experience further. I am sure it will prove a huge hit with visitors, supporters and residents alike.”

The Tiger Rags exhibition has two themes, Plurality of Polyester and International Tigers.

Plurality of Polyester will run from July 3 to September 3, followed by International Tigers from September 4 to October 2.

The first two months will focus on kit design.

Examples of different styles will be on display, as will shirts from the 1980s.

Shirts will also commemorate teams from 2008, 2014 and 2016, when the Tigers reached Wembley finals.

From September 4 to October 2 the exhibition switches to International Tigers.

The last month of Tiger Rags acknowledges the part played by foreign footballers during Hull City’s rise from the basement division to the Premier League, with a display of shirts worn by players from around the globe who have come to Hull to play for the Tigers.

An audio description will also be available for people to download onto their mobile devices from www.hullcitykits.co.uk

Martin Green, Director of Hull 2017, said: “Hull City are woven into the fabric of the city’s cultural identity so it is fantastic to have such an amazing collection of memorabilia on display as part of Hull 2017.”

For more information, please contact:
Les Motherby on les@tigernation.co.uk or 07887 555679

Tiger Rags is one of 60 new projects to receive funding through the Hull 2017 Creative Communities Programme, which is being delivered in partnership with the Big Lottery Fund, a Principal Partner of Hull 2017.

A total of £750,000 is being invested in the programme, which was set up to celebrate, nurture and support local talent and develop opportunities for emerging artists.

In addition to cash from Hull 2017 and the Big Lottery Fund, the projects will receive staff support to build capacity in the arts sector, helping to create a legacy. The Creative Communities Programme is also being supported by Hull and East Riding Charitable Trust.

The projects – which range from photography exhibitions to music and food festivals and choral and orchestral concerts to audio-visual installations – will see local artists, community groups, cultural and other organisations in the city working with local people of all ages to create new artistic work, events, installations and other activity throughout 2017.

About Hull UK City of Culture

Divided into four seasons, this nationally significant event draws on the distinctive spirit of the city and the artists, writers, directors, musicians, revolutionaries and thinkers that have made such a significant contribution to the development of art and ideas.

68 per cent of the funding is dedicated to public facing activities, including the widest range of cultural events in every corner of the city, with a further 11 per cent for legacy and contingency. More than £5 million is being invested in volunteering, learning and community engagement. £1.6 million is being invested to ensure a legacy after 2017. This includes capacity building, such as supporting existing events so they can grow, staging curtain-raiser events, developing future programming for after 2017 and building a new platform to support a unified ticketing system for the city.

Hull 2017’s International Partners are: Aarhus, Denmark, which is European Capital of Culture 2017; Reykjavik, Iceland; Rotterdam, The Netherlands; and Freetown, Sierra Leone (twinned with Hull). These relationships are reflected in a number of events throughout the year.

For information go to www.hull2017.co.uk

The Big Lottery Fund is the largest funder of community activity in the UK. It puts people in the lead to improve their lives and communities, often through small, local projects.

It is responsible for giving out 40% of the money raised by National Lottery players for good causes. Every year it invests over £650 million and awards around 12,000 grants across the UK for health, education, environment and charitable purposes.

Since June 2004 it has awarded over £8 billion to projects that change the lives of millions of people. Since the National Lottery began in 1994, £34 billion has been raised and more than 450,000 grants awarded.

The Hollingbery Family founded the business in 1933 with the first Comet superstore opened in Hull in 1968. The business was subsequently sold to Kingfisher and in 1985 the charity was established with the defined purpose of donating funds to help and support charities, both national and local, and other deserving causes, provided that direct benefit was forthcoming for people who live in Hull or the East Riding of Yorkshire.

For more information, including on how to apply for funds, see http://hullandeastridingtrust.org.uk/