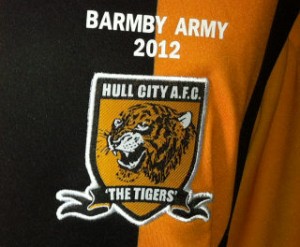 Each shirt, priced £39.99 (£29.99 for child sizes) comes with a signed postcard and message from the new manager. Furthermore, one purchaser decided by random draw will receive a commemorative shirt signed by the 2011/12 first team squad, presented by Nick Barmby ahead of our home game against Brighton next month.

Using mentions on the #hcafc Twitter hashtag as a rough (and admittedly far from indicative) gauge, the response to the club’s announcement of the shirts has been lukewarm, and we can understand that reaction. It all seems a bit… unnecessary.

Consider that the text enhanced shirts worn during the club’s finest hour-and-a-half, the Wembley win that sealed promotion to the Premier League, were never released as a replica, yet you can buy a shirt marking a managerial appointment. Odd.

Still, there is no obligation to buy one, and the club increasing fan choice when buying  merchandise* can only be a good thing. The club are offering fans who have a shirt that is sans-printing (presumably this doesn’t include shirts with player names and squad numbers) the chance to trade it in for a half-price ‘Barmby Army’ shirt. They’ll be available from Saturday.

*Be aware that while stocks last, shirts ordered from the Tiger Leisure webstore “will automatically be a commemorative shirt”. Strange that you can’t indicate whether you want a standard shirt or not.