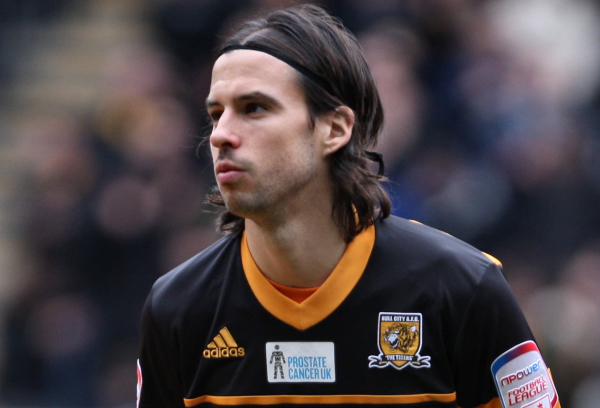 The Football League’s charity of the year is The Prostate Cancer Charity and league clubs have being doing their bit to raise awareness of the charity’s aims and funds to go towards research and support for those contending with prostate cancer.

City have worn charity patches on their shirts in four games; The 5-2 home routing of Birmingham, away to Crystal Palace, in the televised Monday night game at Burnley and most recently in the 2-1 defeat against Nottingham Forest (as seen on Gorgeous George, above.) 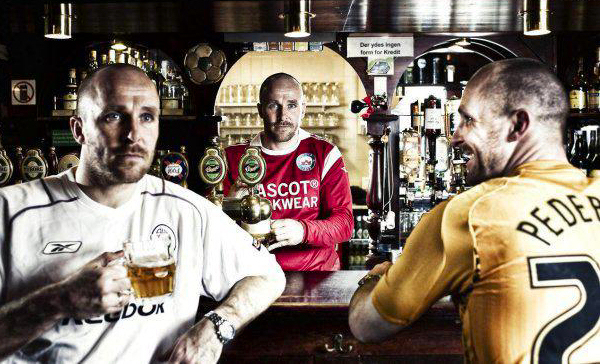 Former Tiger Henrik Pedersen recently paid respect to one-time team mate Andy Dawson, flying in from his native Denmark to attend the 2008 promotion season reunion night at Willerby Manor Hotel  that was part of Dawson’s testimonial year festivities. Mingling with Tiger Nationals after the event, he extended an open invitation to his pub in Silkeborg, Denmark.

The Facebook page of Sportspubben Målet (Målet is Danish for goal) features an image of three Henrik Pedersens in the pub, each wearing a shirt of one the three clubs the midfielder played for during his career. Behind the bar Henrik pulls a pint wearing a Silkeborg shirt, and the two Henriks quaffing ale at the bar are wearing the shirts of Bolton and City. Superb! 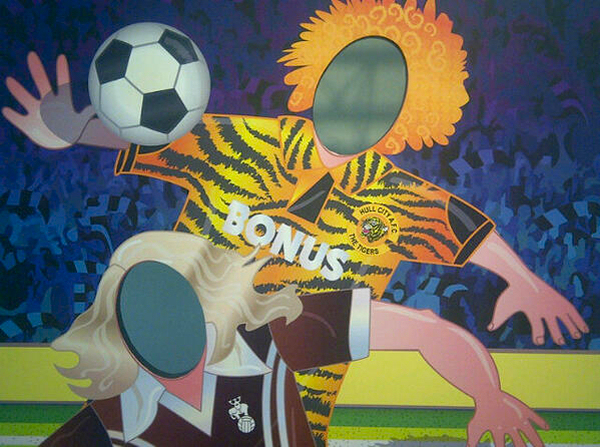 We recently visited the National Football Museum in Manchester, and spied this seaside-style peep through photo board featuring a 1992/93 City shirt facing off with a brown Coventry away shirt from the Seventies. The board is part of the Football and Fashion exhibit currently displayed on the museum’s third floor, and were pretty sure the reference is not a flattering one to our beloved tiger skin shirt!

Finally, Hull City Kits was happy to help out Watford Palace Theatre in their hour of need, when they asked us to source a 1995-97 City away shirt for use in the forthcoming production ‘Jumpers for goalposts’. The theatre wrote about their efforts to find the right shirt on the Paines Plough blog, and tell us ‘Jumpers for Goalposts’ will be at Hull Truck Theatre in the Autumn.