Before 2009, the longest surname of any Tigers player had been Faulconbridge, as in Craig, the forward loaned to City by Coventry in 1998/99. Faulconbridge’s seemingly superfluous ‘u’ gave his family name 13 letters, although his name never featured on a City shirt as the practice of putting names on the back of Football League jerseys didn’t begin until 1999/2000. Those 13 letters pale in comparison to the surname letter count of Jan Vennegoor of Hesselink, who joined City in September 2009 and played in our second (and ill fated) season in the Premier League.

The Dutchman, who had played for FC Twente and PSV Eindhoven in his homeland, and for Celtic in Scotland prior to his move to the KC Stadium, has a surname that is 20 letters long, which makes it little wonder that fans on messageboards used the shorthand ‘JVoH’. If you take the spaces in his name into account, JVoH’s surname takes up the room of 22 characters on a shirt, which must have been a headache for whoever had to print up shirts for the player and fans buying replicas.

Initially they went with the regular letters, which are 53mm tall on players shirts (replica shirt name letters are only 47mm) and because City radially arch the names, JVoH’s wrapped all the way around the number 29, almost completing a circle… 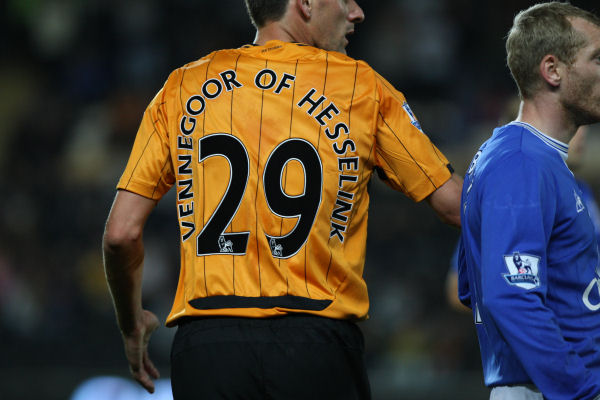 Later in the year though, an order went in for the narrower, but still 53mm tall letters that had  previously only been used by Manchester City’s Shaun Wright-Phillips (both players sported the thinner letters in the 1-1 draw at the now-Etihad Stadium in late November 2009). The narrower letters on JVoH shirts made their first appearance against Wigan on October 3rd 2009 and were used for the rest of the season. 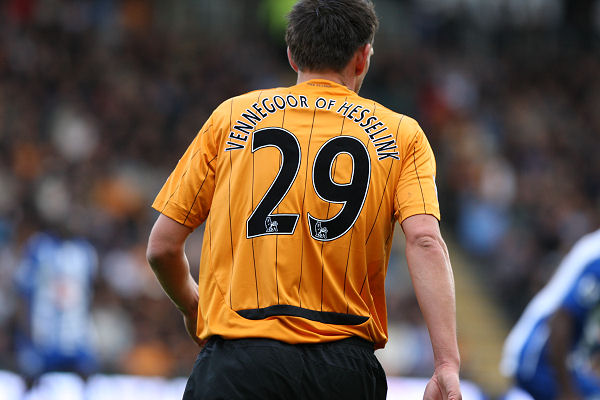 The Guardian newspaper answered a query regarding the meaning of JVoH’s unusual surname, answering; “According to our research, Jan Vennegoor of Hesselink was thus named because, way back in the 17th century, two farming families in the Enschede area of Holland intermarried. Both the Vennegoor and Hesselink names carried equal social weight, and so – rather than choose between them – they chose to use both. ‘Of’ in Dutch actually translates to ‘or’, which would mean that a strict translation of his name would read Jan Vennegoor or Hesselink.