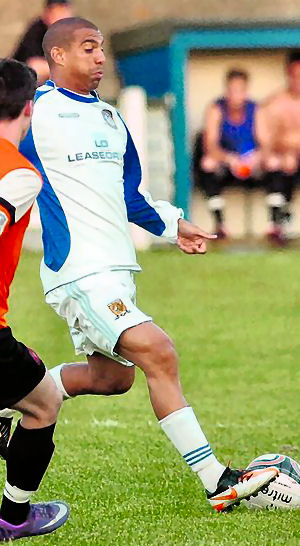 James Harper’s time at Hull City was more notable for his disheveled physical appearance than for decent playing appearances. The former Arsenal trainee joined the Tigers following spells with Cardiff, Reading and Sheffield United, playing in 31 games for City, usually with his shirt untucked and with socks rolled over his shin pads.

Some things it seems don’t change, and though Harper was released at the end of June, he’s still turning out with his shirt untucked, hanging over City shorts, only for Hungerford Town!

Harper played 45 minutes for the Crusaders (who play in the Southern League Division One South & West) in their friendly against Wokingham & Emmbrook on Tuesday. He did so wearing his 2011/12 Tigers white and Argentina blue away shorts. Heh!

Evidently Harper sees Hungerford as a brief stop until he finds a new Football League club, he was reported to be in talks with Doncaster back in May, presumably the club he finally signs for will issue some of their own shorts.

Thanks to Michael Powell for spotting this on Hungerford’s Twitter feed and sharing.