Get Your Kits Out #2

My son is growing up in a strange world, where politicians tweet, where everyone (kit geeks included) has a blog and whole nations are filing for bankruptcy. Stranger though, for me at least, is Hull City at the sharp end of the Championship off the back of a stint in the promised land of the Premier League. As a 34 year old man, having grown accustomed to City being utter rubbish throughout my childhood and beyond, them even contending for promotion in the second tier is as unnerving as it is good.

It’s going to be a key parental duty to ensure my boy knows just how relatively glorious this period in our club’s history is. He should know how close we came to dropping out of the Football League in 1998/99. Our club was dying; financial mismanagement threatened the club’s existence off the pitch, poor players playing poor football in a crumbling stadium threatened quasi-death on it, we were bottom of the Third Division staring non-league football in the face.

You should know what happened next – Warren Joyce became player-manager, signed some “robust” footballers and we dug ourselves out. We survived. Just.

Why the introspective reminiscence? The 1998/99 kit. The home shirt from that tumultuous campaign is most definitely memorable, but not because it looked good, quite the opposite. There was too much white on it, it featured odd gradients and a very orangey ‘amber’. If this shirt is remembered with fondness it isn’t because of it’s apperance, rather the deeds performed by a group of men who wore it, who pulled off what is now known as the ‘Great Escape’. Being subjective, it’s not a great kit. Being emotive, it’s fantastic.

We were contacted by reader Chris, who has two of these shirts – one match worn and one replica bought from the club shop. Chris asked if we were interested in noting the differences between the shirts worn by our heroes and the one bought from the club ‘shop’ (By shop, we obviously mean the tatty bit at the front of Boothferry Park). Interested? Yes. A lot.

The patch bearing the wordmark of the University of Hull is noticeably thinner on the game shirts – it’s the same width, but thinner by around a 1cm. 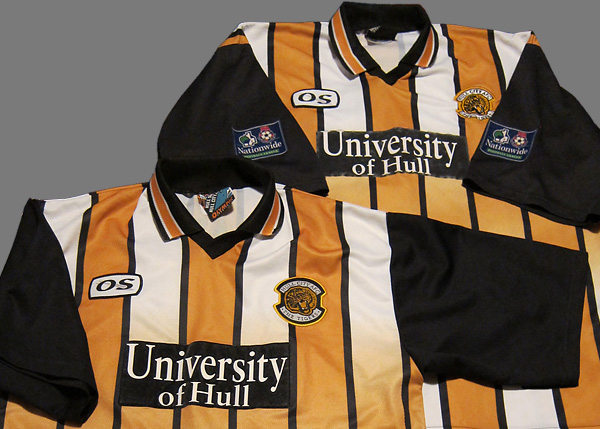 The crests on the game shirts are fully embroided whereas the versions sold in the club shop have sewn on patches. The tiger head and text on these patches appears in much greater detail, and there is a black border surrounding these elements that doesn’t feature on the player issue strips.

The label on the match worn shirt has only the Belgian manufacturer’s logo on it in a livery of grey/silver/black. The replica version however carries the logo of Hull Sharks as well the tigers head that was used on programmes in the 1970s and on various tat in the club shop in the 80s and 90s but hadn’t featured on a shirt until 1998/99. Tennis type David Lloyd owned both City and Hull FC who briefly became the Sharks in an ill advised rebranding. Both clubs shared a city centre club shop nauseatingly called ‘Tiger-Sharks inc.’ 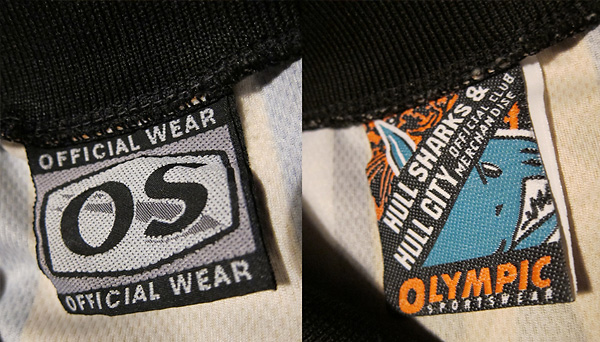 Who wore the match worn shirt?

We’re not sure. 1998/99 was the last season numbers 1-11 were used in whatever style the club and manufacturer saw fit, the following year the Football League mandated squad numbers and player names appear on the back of shirts in a homogeneous font used by all 72 League teams.

The number 2 shirt was acquired from “a bloke in Maidenhead” who was given the shirt by someone at the club and he was under the impression that it belonged to Neil Mann. But Neil Mann never wore number 2 at any point that season, ten other players did though; Kevin Gage, Matt Hocking, Mark Greaves, Mike Edwards, Jon French, Steve Hawes, Warren Joyce, Gary Brabin, David D’Auria and Steve Swales.

The sponsor patch on the front suggests this shirt saw plenty of wear, so it likely covered the torso of the majority of the men liated above. This shirt is memorable for reasons other than design – it acts as a timely reminder of how well City fans have got it at the moment.

Many thanks to Chris for showing off his matchworn shirt. Would you like to show off your prized polyester? Get in touch at hello@hullcitykits.co.uk