Get Your Kits Out #1

We’re inviting Tiger Nationals to show off their prized City gear, from vast collections of replica shirts to matchworn kit, from prototype pieces to shirts big enough to fit buildings… 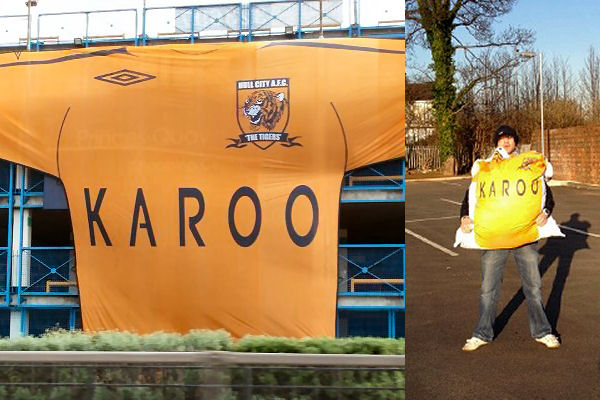 First to accept our invite is lifelong City fan Mike Hawkridge, who can be found in section E5 of the East Stand during home games providing a running commentary for those around him (his best line ever was “Red sky at night, will it be Peter Taylor’s delight?” in a game where City led at sunset).

Despite being a skinny chap, he owns the biggest City shirt ever made, possessing a giant banner featuring the 2007/08 home shirt shirt that was seen throughout the May 2008 play off campain that ended with City being promoted to the Premier League.

The club had the shirt made up ahead of the home leg of the play off semi final against Watford. Before the game kicked off, the banner was passed over the home crowd, starting in the North/East corner and making its way round the lower bowl of the KC Stadium to the North/West corner.

After the game, the club wanted a fan to take the shirt to Wembley and the Fans Liaison Officer contacted Mike, who agreed. “I got it straight after the Waford game and I contacted Wembley to get permission to take it in so it could again be passed around the stands City fans were in. Wembley refused permission though, which was a bit disappointing. In the run up to the play off final, there was a plea on Radio Humberside to have the city awash with flags and banners, and I thought we have to use the shirt somehow.” 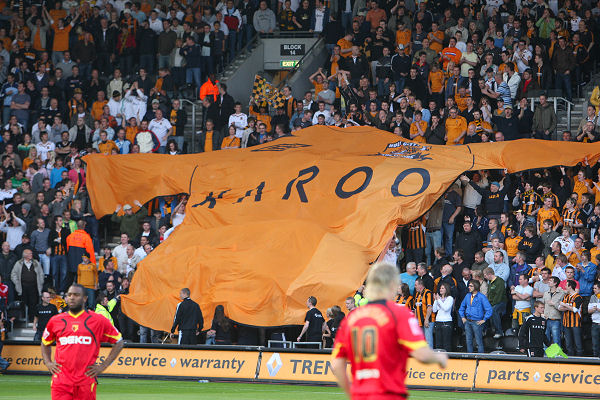 Mike had the idea of displaying the shirt on the side of the Princes Quay car park, where it would be visible to anyone passing through the Castle Street dual carriageway.

“The Quay agreed and it looked great draped from the top of the car park, it covered four storeys and touched the ground. The club put a photo of the shirt on their website and recieved loads of messages, they got great feedback from fans all around the world. It was on the car park the day of the final, I got a call from the Quay’s security team saying some drunk City fans had tried to nick it, so they took it down and I collected it the day after the game. It needed some repairs, there was a tear on one of the sides and my mum and sister sewed it up so we could use it during the civic reception.”

“I took it to the parade in front of Hull City Hall, it comes in a massive bag with a picture of the kit on the front, and I waited until the players appeared on the balcony before getting it out and the fans did the rest. I got a text saying it appeared on Sky Sports, and it’s been in my loft since then.”

Many thanks to Mike for showing off his massive sack (the shirt is a bit big to have him hold up on his own). If you have a burning desire to show off your City kits, the rarer the specimens the better, get in touch at hello@hullcitykits.co.uk