Though our primary interest is playing kits, there is plenty of room in our hearts for equipment;  boots, keeper gloves, sock ties, that sort of stuff, and not forgetting the most important item in any game, match balls.

We yelped with glee then when Leigh Palmer responded to our regular Twitter pleas for people with cool City stuff to show it off here on HCK, as his items are doozies.

Leigh owns the left boot of the pair of Pumas that Dean Windass wore, and scored in, for the Championship Play Off Final at Wembley in May 2008. He also owns one of the special edition matchballs that was used against Arsenal in March 2010, a quite fateful match for Phil Brown, it was his last in charge of City. Let’s look at the swag… 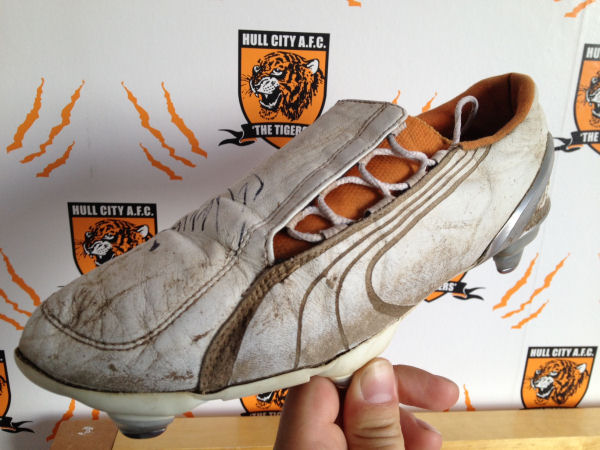 First up is Deano’s left boot, a Puma v1.06 in white, which matched his then dyed blonde hair. Windass wore this in both of the play off semi final legs against Watford as well as at Wembley, and this boot was planted into the turf stabilising Deano as his right foot volleyed the ball into the net, and City into the Premier League on that most glorious of days. 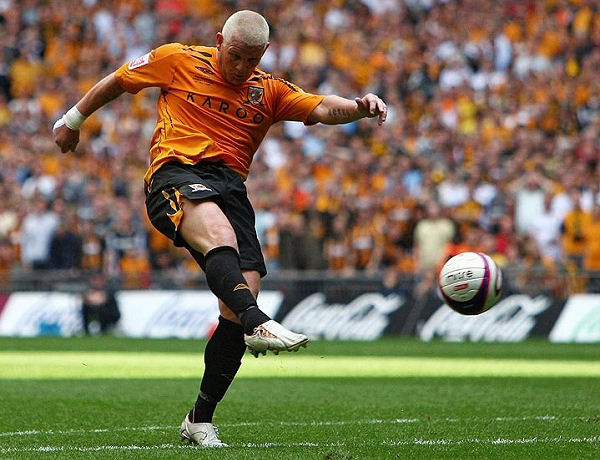 Leigh was a lucky recipient when Deano hoyed the boots into the crowd, his 5th row seat meant that he was perfectly placed to catch the size 9. “The boot is signed on the front, he [Deano] got my lad and me into the ceremony at City Hall and the lad was sat with him on stage while he was signing autographs. He’s a top man.” says Leigh. 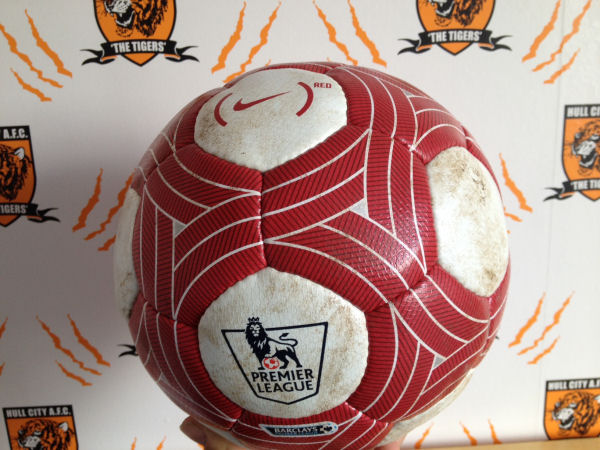 As for the ball, well this isn’t your usual official 2009/10 ‘T90 Ascente’ Premier League matchball. Nike produced a set of red accented balls for use by La Liga in Spain, Serie A in Italy and the Premier League in England to show support for Bono’s (Product) RED charity initiative.

The RED branding is licenced to partner companies, in this case Nike, who produce items that when sold, raise money that goes to the Global Fund to Fight AIDS, Tuberculosis and Malaria. Nike’s contribution to the campaign was red laces (‘Lace up, save lives‘ was their slogan) and the design on the balls is intended to resemble the laces tied up. 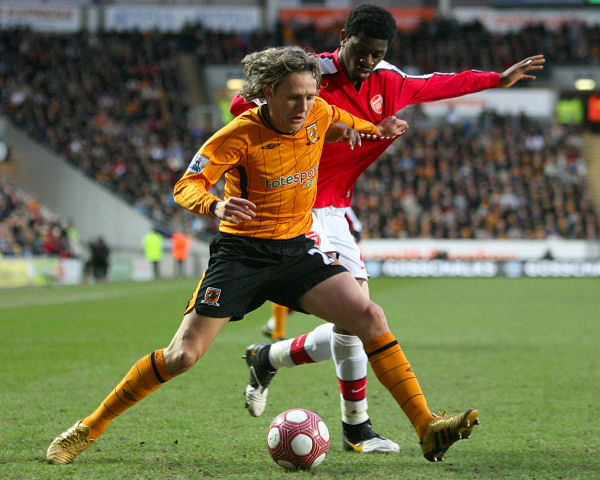 The (Nike) RED balls were used during all Premier League games played on the 13th/14th March 2010, for City that meant against Arsenal who visited the KC Stadium.

Lucky Leigh once again found himself in the right place at the right time. “Samir Nasri kicked the ball into the crowd just as the ref blew for full time, I was sat on the front row of the East Stand, I managed to catch it, get it up my top and slip away.”

Phil Brown wasn’t quite so lucky. City looked on the verge of picking up a highly creditable and useful point when Nicklas Bendtner scored deep into added time to give Arsenal a 2-1 win. The defeat compounded a dreadful run for City, and Brown paid the price, he was put on gardening leave and would not manage City again.

These are unique items from a momentous period in City’s history. Leigh, we’re just a little bit jealous, thanks for sharing.