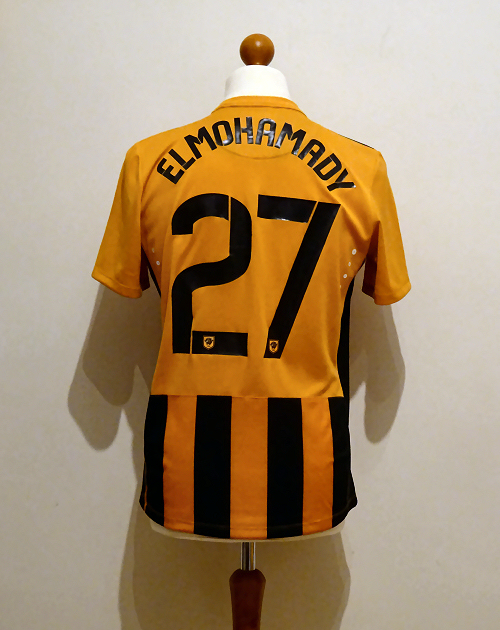 In anticipation of playing in the Europa League proper, City had supplier Umbro knock up a batch of UEFA compliant home shirts after the Tigers advanced from the Qualifying Second Round by beating FK AS Trenčin of Slovakia 2-1 on aggregate. UEFA kit rules insist that teams playing in striped shirts have a single colour panel on the back so that player names and numbers are more readily distinguishable.

Umbro went with solid amber back panels, upon which black names and numbers were applied in a unique letterset specially created for City’s European adventure. The font resembles the stenciled letters seen on cargo crates, appropriate for a team from a port city on its continental travels.

Domestic style shirts with white Premier League numbers (but not names) were used in the two games against Trenčin, but the Euro style shirts were first used in the second leg of the Qualifying Play-Off Round tie with KSC Lokeren of Belgium. They were paired with amber alternate shorts so that Lokeren could wear black shorts with white shirts, after they had agreed to wear black away shirts at home to allow City to wear their white and blue third kit for the first time. 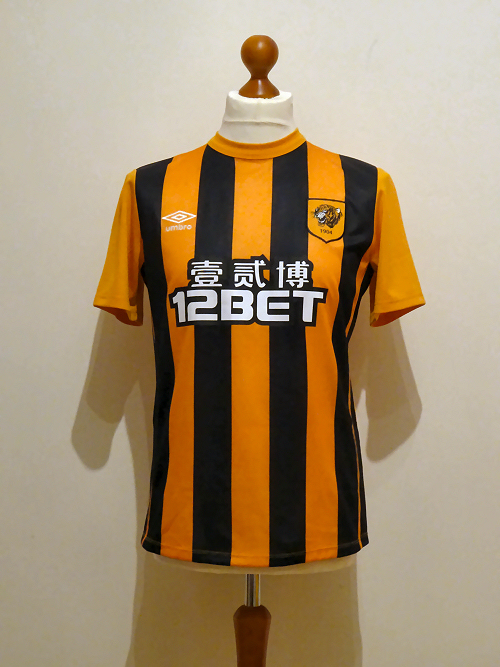 The first leg, at Lokeren’s Daknamstadion, ended in defeat for City. A blunder from ‘keeper Allan McGregor proved costly as it gifted the East Flanders side the only goal of the game. The Tigers hoped to overcome the deficit at home, and did indeed win the second leg, 2-1, with Robbie Brady scoring twice, once from the penalty spot, but it wasn’t enough as City, down to ten men after Yannick Sagbo’s red card, were eliminated on the Away Goals Rule. This shirt was worn by Ahmed Elmohamady (scorer of City’s first ever goal in UEFA sanctioned competition, at home to Trenčin) who played every minute of the game, and came to us unwashed. It is a size S(mall). 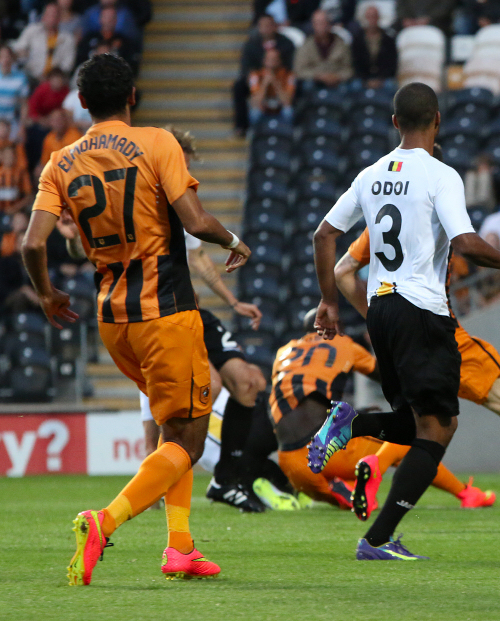 With their European adventure over prematurely, the Tigers redesignated the amber back-paneled shirts (which didn’t carry the Umbro wordmark on each sleeve, as did the domestic shirts) part of a ‘Cup kit’, using them (and the Euro font) in the League Cup at West Brom and the FA Cup at Arsenal.