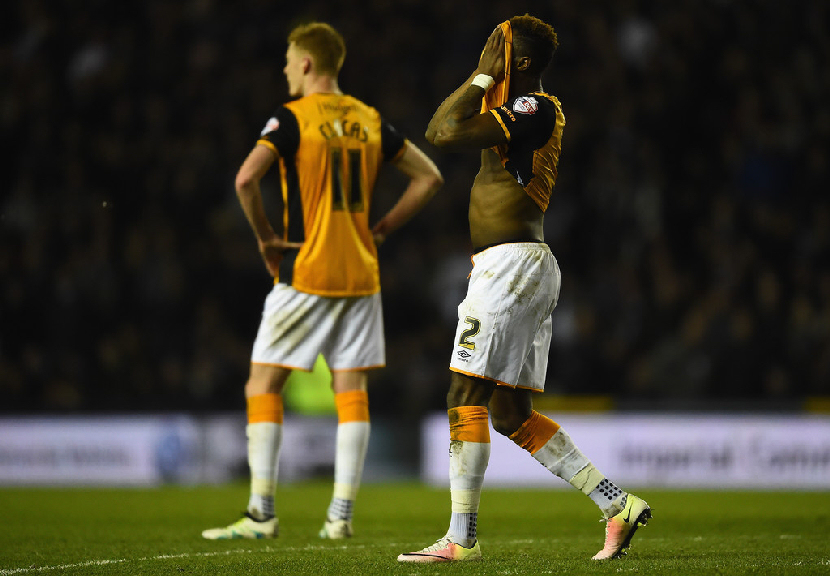 City’s performance was ugly at Derby, as the Tigers’ automatic promotion hopes took a potentially fatal blow in a 4-0 defeat. Their sartorial showing was below par too, as City elected to pair the away kit’s white shorts and socks with the home shirt.

The mash-up seems an odd choice,  inconsistent with how we’ve worn the home shirt with non-standard shorts so far this season. At Sheffield Wednesday in October, City used the amber alternate shorts (designed for use with the 2014/15 home kit) since the primary kit shorts of the home side are black. That look was replicated at Brentford in November, again to avoid a black shorts v black shorts clash and again at Bury in late January in the FA Cup 4th round.

City have also worn amber alternate shorts at Derby before, in 2011/12 in a 2-0 win and in 2012/11, another win, this time 2-1. The amber on white/white mash-up is the seventh look the Tigers have sported this season: in addition to the regular home kit (1), full away kit (2) and all-amber when away (3) ensembles, they’ve worn black home shorts with the white away shirts and socks (4, at Charlton), the white away shirts with home shorts and socks (5, at Forest) and the blueprint/scuba blue third kit (6) twice, at Bristol City and Rotherham.

The Derby away game also saw a first airing of the deep blue ‘keeper kit since late December when it was at Preston. You can view our updated season kit tracker here.