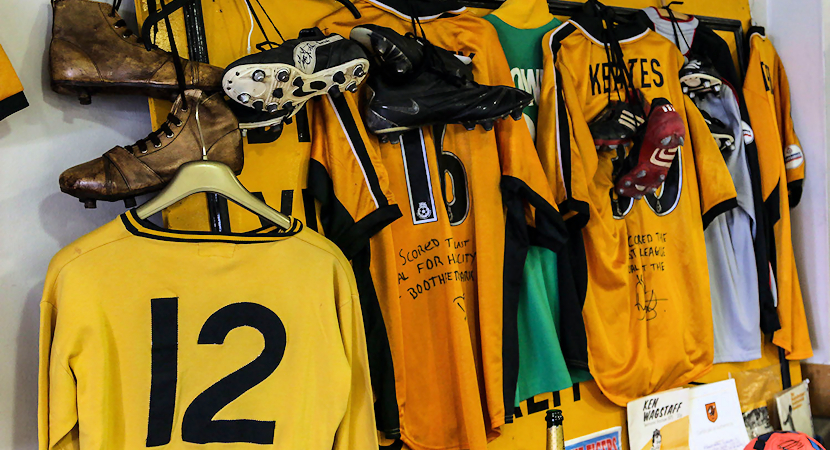 It has been a while since we took an in depth look at the sales of Hull City shirts online, and noticing a mini-boom in the market, we thought we’d reignite the ‘Auction Action’fire on HCK.

I have decided to keep this edition to matchworn shirts, but we will cover replicas too going forward. The four shirts I’ve picked here were all sold on eBay (other auction sites are available!) within the past 8 weeks, and can be seen using the completed listings option on their website.

First up is a Matchwinner 1990/92 away shirt. This bears the number 12 on the reverse but something is very conspicuous by it’s absence: the patch with the wordmark of sponsor Bonus is missing, seemingly from repeated wear and washing. It has the Football League sleeve badges, which were a recent innovation when the shirt was released, which implies this is a genuine player shirt, even if it is sans sponsor.

The damage to the number is noteworthy, and backs up the heavy wear theory. I’m sure if this shirt could talk it would have a story or two to tell about it’s past. It sold for the reasonable price of £87. Hindsight allows us to feel disappointed that we didn’t have a dig at it, here at HCK HQ.

Also up for grabs was a 2012/13 Ahmed Elmohamady home shirt by adidas. Now this one is probably the most interesting of the three shirts I’m focusing on, as it sold for a very tidy £170. This is above what we would deem the going rate for a run of the mill matchworn shirt, especially an Elmo shirt, as he was known for his generosity in giving away match shirts. I know of collectors who focus on shirts from promotion winning seasons, and this certainly ticks that box, which could explain its appeal. I’m sure it’s a great addition to someone’s collection but I think they’ve overpaid.

Next we have a 2013/14 Curtis Davies away shirt featuring a poppy applique. We uncovered the secret to getting one of these on the Kitcast earlier this year, when Adam shared the story of some drunken eBaying. It looks like someone else has cottoned on and captured the Curtis Davies shirt. The sale value shows as £972.23 on eBay (the Sterling price fluctuates as exchange rates change, since the listing price was in US dollars) but it’s highly likely that an offer has been accepted on this shirt. Curtis played 90 minutes at St Mary’s as the Tigers fall to a 4-1 defeat against Southampton.

Lastly, and finishing most recently, was a 2019/20 Jarrod Bowen home shirt by Umbro. This was donated to Peterborough by their former player/manager, current Hull City gaffer Grant McCann, in support of Posh club legend Tommy Robson, the holder of the club record for most appearances. Tommy was recently diagnosed with motor neurone disease and the football world is rallying round to show its support. The shirt raised the sum of £410 for a very worthy cause. We at HCK would like send our best wishes to Tommy and his family.

If it’s you that’s added any of these into your collection, give us a shout across any of our social channels and let us know your thoughts.