@MikeyCarter90 has been trawling the auction sites for City polyester, here’s what you could have won!

In what has become an annual occasion football clubs across the country wore a poppy applique on their match shirts for dedicated Remembrance fixtures in November.

For the first time (and hopefully the last) the Royal British Legion used a company from the suburbs of Amsterdam called matchwornshirt.com to auction off these shirts. Previously they’d used their own eBay account and last year used Italian operation Charity Stars

matchwornshirt.com have a fascinating modus operandi, shirts are listed as a game kicks off, so as Hull City played West Bromwich Albion on Saturday 9th November you could bid on shirts still being worn in front of you in the stadium. Because the shirts were in use when they were listed, a somewhat approximate illustration represented each shirt available. As a player made his way onto the field as a substitute that shirt became available too, so as the game progressed the shirts of Eaves, Honeyman and Lewis-Potter appeared on the site.

During half time we had a closer look at the site to see how the auctions worked, and it became apparent that bids were in fixed increments of at £22.00 though you could bid more. Those increments are a bit steep!

Auctions were set to finish at 3pm four days later on Wednesday 13th November. Having them end during working hours is rather inconvenient, and little did we know as the lots neared the end time that if a bid was placed within the final 15 minutes of the auction it would extend the auction by 15 minutes, again not convenient if you’re at work. The final auction didn’t end until 15:47.

I fully understand and appreciate the fact that this is for charity, but there surely has to be a better way of auctioning? It felt like the goal posts were constantly moving, you plan as best you can to be free* just before 3pm, ready for the end of the auction, only to find out this could go on a lot longer.

*hid in the toilets at work

Several times during the final day the site became unavailable, the first time this happened when the sire reappeared a lot more shirts were available to bid upon, such as John Toral’s shirts and George Long’s yellow jersey from the Fulham game. They appeared with only 2 hours and change to go, with a starting price of £77. A little while later the site became non-functional again, and when it was back to working order the new shirts had been removed, despite some of them attracting bids and bid confirmation emails being sent. This was getting shambolic.

Now I’ve had my moan, let’s take a look through what each shirt sold for. A total of 18 shirts were listed of which 15 were match worn and 3 were match issued. The total raised was a staggering £5388 which on average was just under £300 for each piece of polyester!

It will come as little surprise to everyone, the shirt with the highest selling value was that of Jarrod Bowen, which finishing for a whopping £612!

The second most valuable shirt belonged to club captain Eric Lichaj, who broke the £400 barrier.

The top three was rounded out by Polish superstar Kamil Grosicki, who’s shirt pulled in a very tidy £366.

The cheapest of the match worn outfield shirt was worn by Callum Elder, which still brought home £274. This is considerably higher than most seasons. 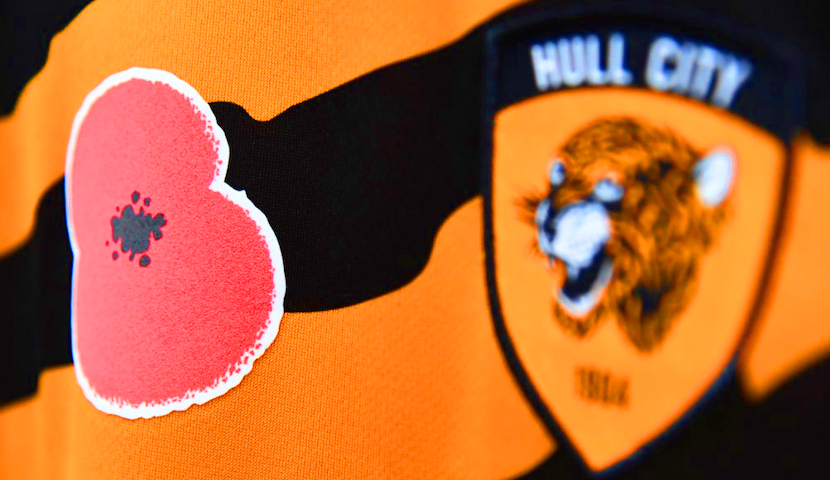 Here is a list in value order of all Hull City 2019/20 Home Shirts sold in support of the Royal British Legion.

In mid-December, another batch of poppy shirts, 20 in total, appeared on matchwornshirt.com. They were listed as match issued from the West Bromwich Albion game, though there is a good chance some of these were worn against Fulham the week before. Eric Lichaj’s was the most likely as the photo showed a mud stained shirt, then there’s Jon Toral who was injured in the Fulham game so didn’t feature against WBA, and George Long, who wore a yellow shirt at Fulham.

This second auction wasn’t as well publicised as the first, they had already been online for a few days before we realised, so perhaps there is little surprise that the prices fetched weren’t as high as the first batch.

The most valuable shirt from round two was Kevin Stewart’s, and fetched just over £200. This amount was less than 14 of the 18 shirts sold in the first batch.

Second on the list is that of Kamil Grosicki, closely followed by Leonardo Da Silva.

The cheapest outfield shirt was that of Stephen Kingsley, it brought home £101 for the Royal British Legion. The cheapest shirt overall however belonged to sub ‘keeper Matt Ingram. His bench worn, match issued yellow jersey from the Fulham game sold for a modest £95.

Here is a list in highest final sale amount order of all the batch two shirts auctioned in support of the Royal British Legion.

Batch two shirts went for combined £2969, which when added to the batch one figure of £5388 creates a total of £8357. Matchwornshirt.com state that 79% of funds raised will reach the charity being supported. Were you one of the lucky/foolish people to pick up one (or more) of the 38 shirts? Let us know on social media @HullCityKits, we’d love to know what you picked up.

2019/20 poppy shirts weren’t the only shirts available since our last edition. We’ve once again seen a flurry of match-worn shirts sell in a short period of time.

Two more 2013/14 poppy shirts, those of George Boyd and Paul McShane, have shirts sold via the American memorabilia seller Nate D Sanders on eBay. Maybe the purchasers have followed our tip covered on a recent Kitcast.

The biggest sum for a non-poppy shirt was paid for Jarrod Bowen’s shirt from the Derby County home game, when Bowen scored both goals in a 2-0 win. This shirt was listed as a charity auction and raised £478 for Cry UK and Driffield Panthers under 9s.

We also spotted an Andy Robertson 2016/17 home shirt which sold for around £90 including postage from Singapore. How does a match worn Hull City shirt end up in Singapore? Answers on a postcard, please!

We’ve also been keeping tabs on vintage replica shirt sale and here are a few which have caught our eye;

This 2002/04 shirt with Elliot 7 on the reverse sold for £23. The seller added to the description partway through the listing stating it didn’t have sleeve patches on, which makes me believe they received quite a few messages asking if the shirt was player issue. 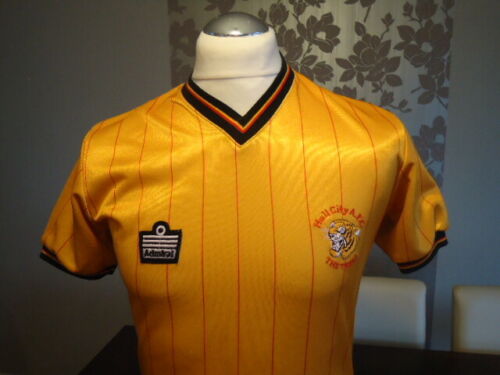 As you’d expect, shirts from the 1980s go for a decent wedge and this one wasn’t any different.

One that caught me by surprise though was a 1994 limited edition Pelada shirt.

Even in its 25th anniversary year it probably shouldn’t be making anyone over £200 but it did! Despite the limited numbers these frequently appear on online auction sites and tend to sell for £100-£150, so this seller has struck it lucky.

November and December were bountiful months for match worn shirt collectors. Did you take advantage and get something nice for your collection? Join the social media discussion with us by searching @HullCityKits.

The best shirts of the 2010s
Scroll to top