Tireless servant of the Tiger Nation Mike Carter (@MikeyCarter90) has kept an eye on eBay for City apparel in November, and here reports on his findings…

November is a month of remembrance, firstly of ‘treason and plot’, and later of the horrors of wars that scarred the globe in the first part of the 20th century. The latter remembrance has led to the auctions of match-worn shirts since 2009, as shirts bearing poppy appliqués are sold to raise funds for the Royal British Legion.

We had expected to be covering those shirt sales in this round-up, but the company charged with auctioning the poppy shirts elected to extend the auctions and end them in early December, which puts them beyond the scope of this précis of Tigers apparel sales in November 2021.

So what else occurred in November? Well City won four games out of five, and most of the people who ordered a 2021/22 away shirt from the club finally received their blackout garb! There were also four player issue/match-worn shirts that sold via eBay, so let’s start with those…

A pair of 2009/10 away shirts were listed at almost the same time. The first listed was issued to Richard Garcia and sold for just £46, a great price for the buyer that added this shirt into their collection.

The second ‘Fusion Blue’ away shirt was also issued but this time to Dutchman Jan Vennegoor of Hesselink. It featured the smaller size Premier League sleeve patches, which the club used on occasion when they ran out of full player size appliqués. The shirt originated from the player himself, Jan took it out of his boot and gave it to a shirt collector in Eindhoven, where he played just prior to retirement. A surprisingly low £68.66 was enough to secure this shirt, which seems a great buy considering a Jimmy Bullard away shirt from 2009/10 sold for £115 in October.

A Dan Batty 2020/21 home shirt worn against Stevenage in the FA Cup sold for £150. The fixture was played behind closed doors but streamed by the BBC, a broadcast that took in a shootout after a 1-1 draw. Those spot-kicks eliminated the Tigers, meaning the club had no further use for the shirts featuring newly redesigned red FA Cup sleeve patches.

I feel they’ll be a lot of collectors kicking themselves that they missed this one. This one being a 2021/22 Tom Huddlestone home shirt. The listing wasn’t active for long as it sold quickly, likely to an offer above the £80 start price. This is the first 2021/22 shirt which I’ve seen available online, but I’m sure they’ll be more to follow.

The first non-white away shirt in City’s history, a green and white chequered affair from Matchwinner that was used between 1990 and 1992, proves to be one of the rarest shirt finds. There was one available in November, in size large, that was listed on eBay with a buy it now price of £499.99. It did sell, but it’s highly likely the seller accepted a ‘best offer’. £200 is what we would expect such a shirt to sell for, but we have seen people prepared to pay over the odds for replicas recently, and this item was describes as ‘MINT IMMACULATE’. . 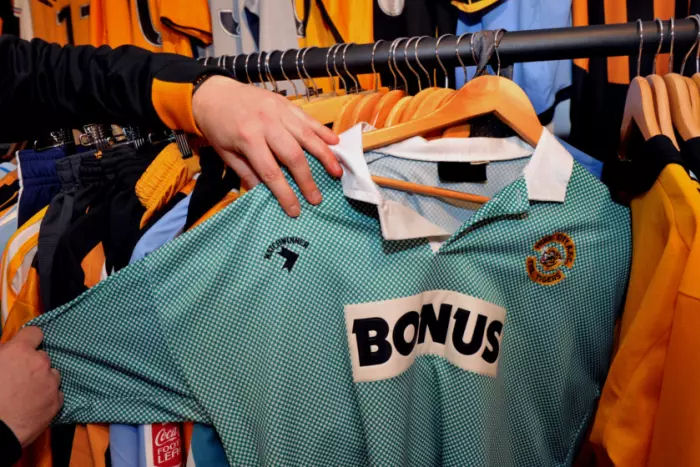 Given the sums paid for 1992/93 home shirts since replica collecting exploded as a mainstream hobby, it’s no surprise that we see at least one available every month. This one in size large, sold for up to £450. Another auction with a best offer option, meaning we can’t know for sure what the final price was. Many of these shirts have been snapped up by Asian shirt collectors, so we wonder if this one remained in the UK or is now in the Far East.

Something you don’t see every day is a goalkeeper’s shirt from the 1999/00 season. The size of this shirt will have impacted the final price of £53 as anything bigger than a size small might have over double that.

This next shirt was the bargain of the month. I don’t quite understand why this 2001/02 away shirt in a size XL, which is usually a desired size, finished at just £19. What a steal!

It appears now that the club have fulfilled most of the back orders on their 2021/22 away shirt, but for the third month in a row we witnessed one sell on eBay. In a size XXL this one sold for £56.03, which is just under £10 over the retail price and the lowest of the three to sell between August and November.

Why anyone would want this next one is beyond me, but it appealed enough for four separate bidders to have a punt of this quite bizarre item. A far from legit white version of the tiger print 1992/93 shirt. Sure there are white tigers but this frankly looks more of a zebra print. For an unofficial concept shirt, it wasn’t cheap at £78. Its origins are unknown to us at HCK, and we might be better off not knowing..

That’s it for our November 2021 round-up, it will be 2022 by the time we next report on the Auction Action, and we’ll be able to cover the belated poppy shirt sales. Before then, have yourself a very merry Kitmas.