The month of May is usually a crescendo point for football: leagues come to a climactic conclusion with champions crowned and relegated sides painfully flushed out, the Play-Offs roulette wheel spins, and cup finals end with trophies held aloft. May 2020 though has had none of that, no professional football played at all on our green and pleasant land in fact. It has though, been a month of high Hull City shirt availability, as people get their football fix through the purchase of polyester auctioned online, sometimes at eyebrow raising prices.

The first shirt which caught my eye in May was this 1998/99 home shirt. It’s XL, a size highly sought after by people who want shirts from an era when they were much smaller in stature, and sold for £75.

Can you remember the 2015/16 matchworn Jake Livermore home shirt from April’s Auction Action? Well, it was back in May! This time it sold for £140, making a tidy profit for the seller practising ‘shirt flipping’.

Lockdown loft rummaging is making a mockery of my ‘80s shirts don’t crop up too often’ statement. Four were available in May…

The first true Hull City replica shirts were made available to purchase from the club in 1982 (there were shirts very loosely based on what City’s players wore sold in independent shops in the city, but these were more ‘approximations’ than replicas) and this Admiral shirt is one of that batch. The buyer paid £90 for the 36″ chest shirt.

A second 1982-84 home shirt sold for only £59. Again the size is tiny, the first replicas were pitched squarely at kids after all, a 32-34″ chest. The white number 4 stitched on very low on the back may have had something to do with the relatively low final sale price.

A shirt from later in the decade sold for much more, and the adult size may account for that. This 1988/89 home shirt in chest size 44″ (which is usually a large) sold for a whopping £266!

If fully signed replicas are your thing this 2014/15 home shirt was available. It sold for £31 and it also had Meyler 7 printed on the back to boot!

Someone has probably paid silly money for a 1994/95 home shirt (complete with the hideously massive Needlers Sweets patch). This one was listed at £300 with the best offer option, and an offer likely secured it. Unfortunately, we don’t see the sale price but that’s probably for the best!

Stepping away from shirts for a moment, a 2015/16 Championship Play-Off Final match ball was available. Selling for £77.55, I’d consider this to be a very reasonable price. 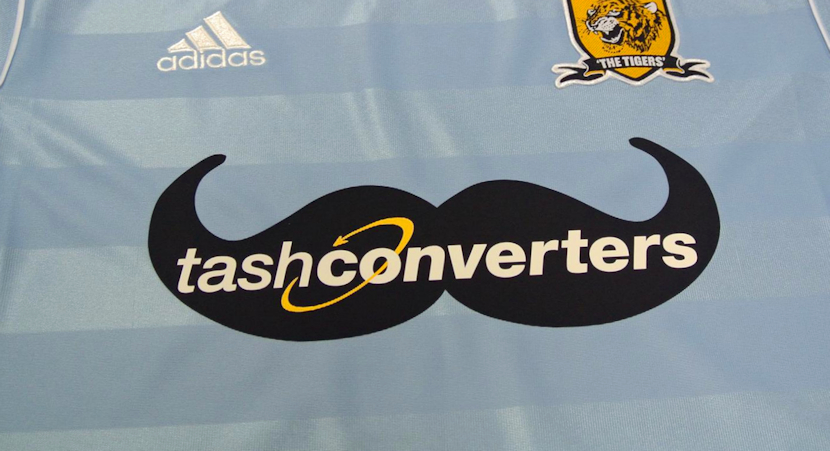 What you’re going to read next might make you cry, and bemoan not being aware of this listing when it was live. The HCK cadre of collectors are definitely full of non-buyers remorse. A 2011/12 away shirt with the Tash Converters sponsor, match issued for, maybe even matchworn by Robert Koren in the game at Bristol City, sold for… £7.50. The seller clearly didn’t know they what they had!

The most expensive shirt featured this month is this 1994/95 home shirt. Patched up with Football League sleeve appliqués and the number 15 on the reverse, we believe this to have been worn in pre-season or by the reserves, but not by the first team in League action as we didn’t use a number 15 that season. Someone paid £385 for the privilege of owning this piece of polyester.

I like a job lot and I tried to pick this one up but unfortunately for me, someone beat me to it. An offer of £125 secured the 18 shirts. Over the latter half of the month, most of them reappeared and sold for around £20-£30 each…

We’re back into the 1990s for the next shirt. This 1990-92 home shirt sold for £72. Some slight damage to the sponsor might have affected the final price, but it’s still a lovely pick-up for someone.

These next two shirts were sold within 24 hours of them being listed. The 1997/98 home and away shirts both ended with offers before the auctions had run their course. The home shirt fetched £40 and the away shirt £60.

I have saved the most bizarre to last on this months Auction Action. This size large 1995-97 home shirt, which I’d expect to sell for between £80 and £100 depending on condition, sold for an improbable £265!

That’s all for this months Auction Action but make sure to check back next month where we will cover the sales made in June, by which time we’ll have witnessed the return of Football League action! Wooooooo!