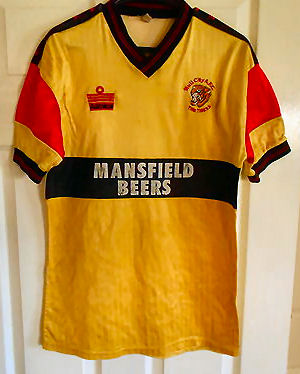 The season may be over and the players off sunning themselves in Ayia Napa or wherever, but Ebay never sleeps. There is no respite for shirt collectors.

They must remain vigilant all year round in their polyester-craving quest, lest they be reminded of the bitterest of auction axioms…”if you snooze, you lose”.

May matched April for City kit intrigue, especially for matchworn items, many of which went for thouroughly reasonable amounts.

The biggest buzz was generated by a 1987/88 Admiral/Mansfield Beers home shirt with 8 on the back, suggesting it was used by Frankie Bunn who frequently wore that number. The partially flaked off sponsor and iron mark add rather than detract from this shirt’s charm, and it went for £160 after 20 bids.

The same seller had another trick up their sleeve, a 1979/80 long sleeved Europa home shirt with 9 on the back. This only went for £77 after 12 bids, the low end price possibly explained by the numerous holes in the shirt. Still, a great piece.

Whoever got this player worn 1989/90 warm up top for £32.50 got an absolute bargain. It’s a bit faded and the Matchwinner logo on the back is degraded, but that just lets you know it was worn throughout the whole season.

From more recent times, this matchworn Manucho shirt from our first Premier League season was listed twice in May with a £75 asking price. The seller eventually accepted a bid of £45. Whatever your thoughts on Manucho’s ability, £45 for a matchworn Premier League shirt is an utter steal.

Are Danny Webb’s matchworn shorts really worth £21? Someone thinks so, though they were incorrectly listed. They were described as 2002/03 home shorts, but the black crest shield suggests they were from 2003/04 when we used black shields sewn on with amber thread rather than amber shields (used the year before) to distinguish them from the black away shorts which also used amber shields. Webb only made a handful of appearances in 2003/04 before departing to Cambridge.

Ray Parlours matchworn shorts from 2006/07 seem more worthy of a similar price of £21.50. Oddly, Jason Price’s worn shorts from the 2004/05 promotion campaign went for a mere pound, as did some alternate amber shorts that were match prepared for but ultimately unused by Nathan Doyle at Luton. We snaffled those.

Onto replicas, the seller of this 1992/93 Matchwinner/Bonus away shirt with ‘Windass 10’ on the back (that we featured in last month’s Auction Action) twice had to relist after winning bidders failed to pay up. When finally sold, it went for £60, some £40 less than was bid the first time round. 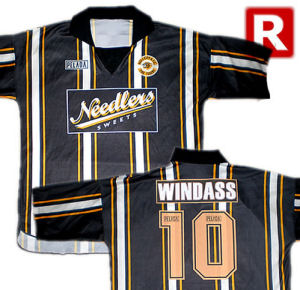 Last month we also mentioned an XL limited edition ‘Needlers’ shirt whch fetched £51 for its seller. In May the very same shirt was auctioned again, this time with ’10 Windass’ applied to the back and it went for £100.

The reseller didn’t mention the hole though. Naughty. It’s worth noting that squad names didn’t appear on Football League shirts until 1999, though often fans had sports shops add them anyway.

You don’t see many Great Escape season away shirts up for grabs, this slightly beaten up one attracted 7 bids and sold for £35. A home shirt from the same year, 1998/99, garnered 15 bids and went for £40. 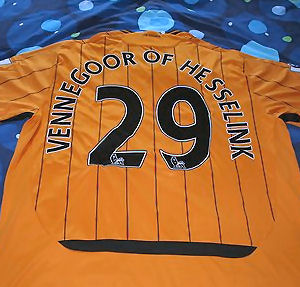 Jan Vennegoor of Hesselink’s retirement from the game coincided with the listing of an XXL 2009/10 home shirt with his name and number on the back. It featured the full sized Premier League letters intially used for the Dutchman’s game shirts before smaller letters were ordered by the club. After 8 bids, it raised £24.50.

That’s all for this month. Happy bidding!