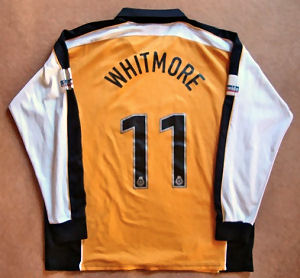 March was a manic period for the Tigers, squeezing 9 games into it’s 31 days. it was also an interesting month for fans seeking old City shirts.

There were some relative bargains to be had where match worn/issued shirts were concerned, a signed Henrik Pedersen worn 2007-08 home shirt fetched £80, whereas a 2000/2001 Theo Whitmore home shirt  went for just £62.

Tiger striped 1992/93 shirts continue to command triple figure bids, this one went for just under £176, prompting someone to ask £220 as a buy it now price for one in size large.  It seems a bit cheeky to set such a high price when the seller says the B of the BONUS sponsor has a split in it, which may explain why no one has stumped up for it after a full 31 days listed. The same seller is asking £300 for a 1982-84 home shirt in large. Cuh.

Admiral reproduced that design in a much shinier fabric for seasons 1984/85 and 1985/86, and a youths (35-37″) version went for £102 after receiving 19 bids. Another one, also in a youths size but with the measurements not listed garnered 17 bids but went for just £29.66. Some cautionary tales for people listing old shirts then, let bidders decide what a shirt is worth, and state the exact size if you want people to bid big.

A centenary home shirt signed by 28 players spanning several generations, including Andy Davidson, John McSeveney, Ken Wagstaff, Chris Chilton, Billy Whitehurst, Richard Jobson and Kevin Francis fetched just £51, less than the £55 asking price for a 2009/10 replica home shirt signed by Jimmy Bullard. Not that anyone has paid that amount so far, though one person has made an offer, Paul Duffen perhaps. 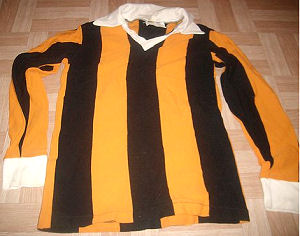 Some 90s away shirts were snapped up, a 1993/94 Pelada/Pepis jade shirt in large sold for £69, while an XXL Super League/University of Hull white shirt from 1997/98 went for £72. Our favourite item auctioned in March was a late 70s Europa home shirt in a youths 30/32″ size. The seller correctly stated that replicas were a rarity back then, a surprise then that it fetched just £37.