When the Chilean poet and diplomat Pablo Nerudo wrote “Green was the silence, wet was the light, the month of June trembled like a butterfly”, the chances are he wasn’t describing the frustration of trying to buy Hull City apparel online last month. Still, intrepid eBay enthusiast Mike Carter is here to tell you what you could have won in June…

For a second successive month, match-worn Hull City shirts were at a premium for quantity in June. During my daily searches, I only came across two: This match issued Allan McGregor 2016/17 ‘keeper jersey was listed at £70 with the best offer option accessible to buyers. We believe it to have sold for an offer, so someone added a nice jersey into their collection for a very good price.

The only other match-worn shirt I have to cover is this 2006/07 Dean Marney home shirt. It was listed by local charity Dove House Hospice on eBay. Listed at £199.99 with the best offer option, it was priced at the high end of its approximate value in my opinion. This one also sold for an offer, which isn’t surprising to know after looking at the start price. It’s a lovely shirt and one you don’t see appear often. 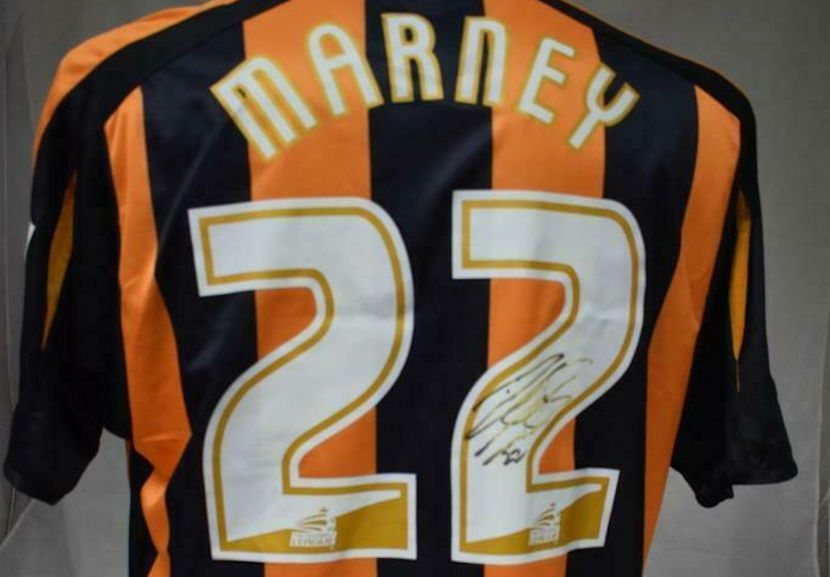 Moving on to the replica shirts… there was a good age spread from the 1980s through to the current day. The oldest shirt was this 1982/83 away shirt by Admiral. It sold for £190 or the best offer. However, it is a size small. That will have kept the price under the £200 barrier in my opinion.

Dove House had a prolific month for City shirts in June, including a pair of 1997/98 home shirts. One of the Super League replicas came in a frame and sold for £101 with a stipulation that it must be collected. The other, unframed and size large was priced at £119.95 with the best offer option available.

The trend that we’ve seen of tiger print shirts selling for silly money not only continued in June, it escalated. We’ve seen the OG tiger print sell for £500+, but this is the first time we’ve seen the 1993/94 follow up version sell for upwards of £550 (from my memory). The shirt was listed as unworn and from the images, it looks in impeccable condition. It is a pricey purchase at £586 but the buyer has a great shirt in exchange.

If long-sleeved shirts turn you on, then you’ll love this next one. A gorgeous home shirt from 1999/00, the first season long sleeved shirts were available commercially, was picked up by someone for £129.95 or best offer. It’s great to see a long-sleeved option of this one available and once again in excellent condition.

The final shirt I’ll cover is the most recent. This 2020/21 away shirt printed with the name of local wide man Keane Lewis-Potter, flogged for £35 or best offer. The club sold out quite quickly so seeing these shirts sell for roughly retail isn’t a shock. I would have maybe expected it to sell for a little more at auction, but the seller was happy with the price they set.

That’s all for June’s Auction Action. This month felt a little underwhelming off the back of some good availability in the last few months. Here’s to a stronger line-up in July.