Football is back! Sort of. Fans still aren’t allowed in the grounds, but to everybody’s surprise, City have won a game! Their first league win since mastodons roamed the Earth, or at least, since Bowen and Grosicki left.

The inability of fans to attend games continues to be felt in the City polyester resale market, as Tiger Nationals look to get a tangible, material if you will, football fix from shirt purchases, and sellers flood the market looking for a piece of that Covid-19 lockdown price surge action. You can’t log on to eBay without seeing some coin eyed meff offering up a 1993 replica City shirt in exchange for a platinum bucket full of diamonds. In a reverse of what you’d usually expect, some replicas are currently selling for more than matchworns, presumably because buyers want something in their size to wear in lieu of attending games. Mike Carter (@MikeyCarter90) casts his eye over some of the shirts up for grabs in June…

A few match-worn shirts were listed by the same seller… this 2012/13 Corry Evans home shirt fetched £110, also available was this 2010/11 Daniel Ayala home shirt, which is fully signed on the back unfortunately), which brought in £60. Both were picked up by the same buyer so maybe a multi-purchase discount was agreed?

Sticking with player spec shirts, this Ryan Tafazolli 2019/20 poppy home shirt appeared on eBay early on in the month and is the first resale poppy shirt from the current season I’ve seen online. It sold for £143 which is around £20 more than its original sale price when it was first available. Interesting!

This next shirt sold early, before the end of the auction, for a staggering £350. This 2015/16 Andy Robertson home shirt was listed with a £180 start price, yet someone was that eager to acquire it they offered almost double to secure it! Anyway, I wonder what Robbo’s up to nowadays…

Another matchworn listed by the same seller went live not long after the Robertson shirt auction completed. This 2016/17 Abel Hernandez home shirt sold for a respectable £122. Not a bad pick up by any stretch, but if you don’t already have an Abel or Elmo shirt are you even a City shirt collector?

Has someone been watching old episodes of the HCK Kitcast? This 2013/14 Maynor Figueroa poppy away shirt, which has been on eBay since 2014 at a ridiculous price, finally sold, although I don’t know the final price. I’m guessing an offer will have secured it! Adam highlighted the offer trick with these on an episode of the Kitcast, so maybe he should get a commission on the sales he’s got for Nate D. Sanders?

This 2001/02 long sleeved shirt potentially worn by David Beresford caught the eye of two-thirds of the HCK Kitgeeks, however, it didn’t join any of our Kitrooms. A late battle between two bidders added almost £100 on in the final seconds fetching a very handsome £167 for the seller. I’ve told you now is a good time to sell, right?

If you love a replica with a name on the back then June 2020 could have been for you! Available this month was shirts with Walters, Green, Huddlestone, Barmby and Henriksen on the back. A lovely range of choice covering quite a few eras! Prices ranged from £15 to £31, you can click on a players name to see the exact sale price if you wish. 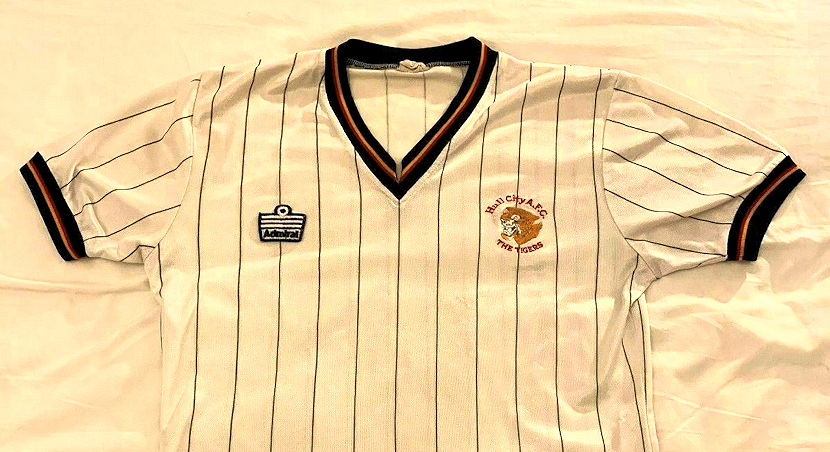 One of the rarer shirts from the 1990s, in this Limited Edition shirt from late 1994 that was never used as a match shirt. It finished at £132, which is probably about right.

Lockdown has had people checking their lofts and garages for tiger print shirts to sell, though only two were listed this month. The condition of them looks poor, which might explain the finishing prices, the lowest we’ve seen for these OG shirts in a while. The 1992/93 finished at £155 and the 1993/94 at £180.

I’ve decided to group together shirts of the same design so we can compare prices. These three 1992/93 away shirts fluctuated by around £50 from the cheapest to the most expensive. The first sold for £74, the second sold for £120 and finally the third sold for £125. All three look in good condition and someone picked up a great buy with the first shirt at £74.

There were also three 1993/94 away shirts available in June and these also fluctuated in price as the cheapest sold for half the price of the most expensive! The first sold for £87, the second brought in £117, which is comparable with recent sales of this shirt and the third finished at a staggering £175. Do people not do research before buying shirts? If only there was a monthly article providing price comparisons…

We’ve seen one rare 1990s shirt in the form of the 1994 Limited Edition shirt, but I’d have to say this 1995/97 away shirt is probably even rarer. It’s not one which I’ve seen a lot of on eBay. This one finished for £70, which was the start price. I’d be intrigued to know what this shirt would have finished at with a lower start price to entice more potential buyers. A high start price can often put people off, even if they’re willing to spend more. Plus we know what can happen in the final seconds of an eBay auction as desperation kicks in!

Lastly for this edition of Auction Action are these 1997/98 shirts. The home shirt finished at £63 and the first away shirt finished at £80. These are both about right for what you’d expect to pay for these shirts in the current inflated market. I’d like to bring your attention to this second 1997/98 away shirt though, it sold for just £41 but when you look a little closer, you’ll see why. On the back, a patch of some kind with ‘Hateley 10’ has been applied over an original print. All I can make out is PINTS at the bottom, so let your imagination run wild on that one…

That’s your lot, we’ll be back in August taking a look at the polyester availability as the Football League season comes to a close.

The kits of the Tigers 2014 European Tour
Scroll to top