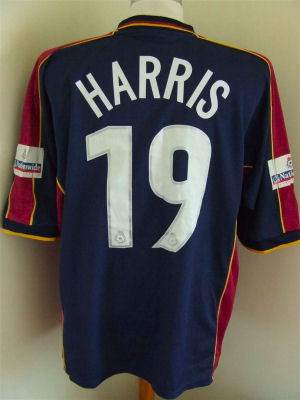 Match worn 2000/01 away shirts were all the rage in June, three were there to be bid on last month.

One of the auctions ended in July so we’ll look at that next month, but as for the other two, first up was a long sleeved, number 3 Andy Holt shirt that was worn at Torquay late in the 2000/01 campaign.

The long throwing full back scored at Plainmoor, but that’s not all that’s notable about this shirt. The sponsor is applied in vinyl, which was used on the away shirts of players who signed after mid-season. Mark Atkin as well as Holt had the vinyl IBC wordmark whereas the rest of the team had sponsors applied in felt. This shirt gleaned 11 bids and went for £82.55. The second shirt was worn by Jason Harris, though looking at the games the navy, maroon and yellow kit was used in, he only wore it in match action for 17 minutes at Shrewsbury. The short sleeve shirt with felt sponsor somehow had made its way to Portugal, that’s where the seller trades from. After 16 bids it went for £46.77.

There were more match worn shirts on offer, the pick of which was Andy Flounders’ number 10, Europa branded 1979/80 home shirt. There were only 10 bids, but the final bid won it for £193.99. In contrast Manucho’s 2008/09 home shirt went for a mere £45. Ok, the Angolan could rarely hit a cow’s arse with a banjo, but this is a Premier League worn shirt! That’s a snip!

On to replicas, we were rather unimpressed by the actions of the seller Replay Football Shirts. Last month we mentioned a tiger stripe 1993/94 home shirt missing the B & O of the Bonus sponsor that went for £47. Replay evidently won the shirt and added a thin felt B & O over the missing letters and a Matchwinner logo holed number 7 and Football League sleeve patches before re-listing it. The seller didn’t mention the shoddy sponsor ‘repair’ work or that the number isn’t an official Matchwinner applique though. 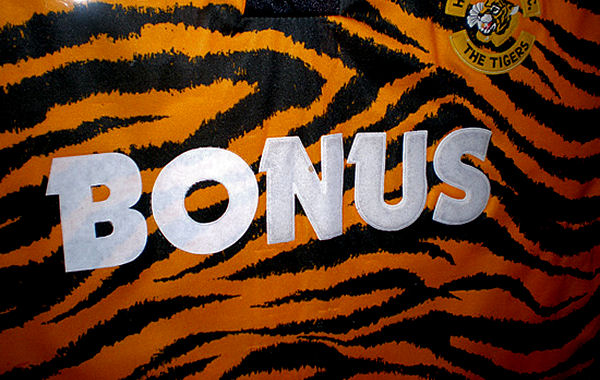 The big rule of any auction is caveat emptor, or buyer beware, and you can argue that anyone buying this shirt has it coming to them, but nonetheless this listing stinks. When that shirt arrived, the buyer who paid £142 had to be horrified that the B & O are see through when the rest of the sponsor is raised felt (as seen above). Ho hum.

This 1994/95 Pelada/Pepis home shirt fetched £62 despite being hideous, whereas Pelada’s limited edition but unused 3rd shirt in large went for £77 after 5 bids. The same seller listed a Super League/University of Hull 1997/98 away shirt, surprisingly it went for only £37.09. Surprising as these shirts rarely appear on Ebay.

Get Your Kits Out #3: Deano boots + (Nike) RED match ball Away keeper kit debuts at Winterton
Scroll to top