2021 has begun with a quiet month for Hull City shirt hunters. There were no fresh player shirt listings on eBay during January, with even a maximum £1 seller fee weekend failing to tempt anyone into moving on their match-worn Hull City polyester.

Undeterred, we’ve cast our eyes over what shirts did sell and here are the highlights…

First up I’m going to mention a shirt that sold in December 2020. I purposefully left this out of last months edition because within a few weeks it appeared again. This 1992/93 home shirt sold for £413.69 on 21st December, after starting at £10 on an auction 7 days earlier. I assume the winner didn’t pay after winning the auction, as within a week it was relisted (by the same seller) – this time as a buy it now with a price tag of £420. It took a fortnight but it did sell for the asking price.

That wasn’t the only 1992/93 home shirt to sell in January as another one sold for £410. These shirts are consistently finishing above £350 as we’ve highlighted on Auction Action. I still have to pinch myself when I see them sell this high though.

Staying in the 1990s, this 1993/94 home shirt sold for £230. Remarkably, this is lower than what we’ve seen recently. I would hazard a guess that this was due to being listed at the same time as a 1992/93 home shirt by the same seller. This potentially over-saturated the tiger print market with another option at the same time and limited the final sale price of the 1993/94 variant. 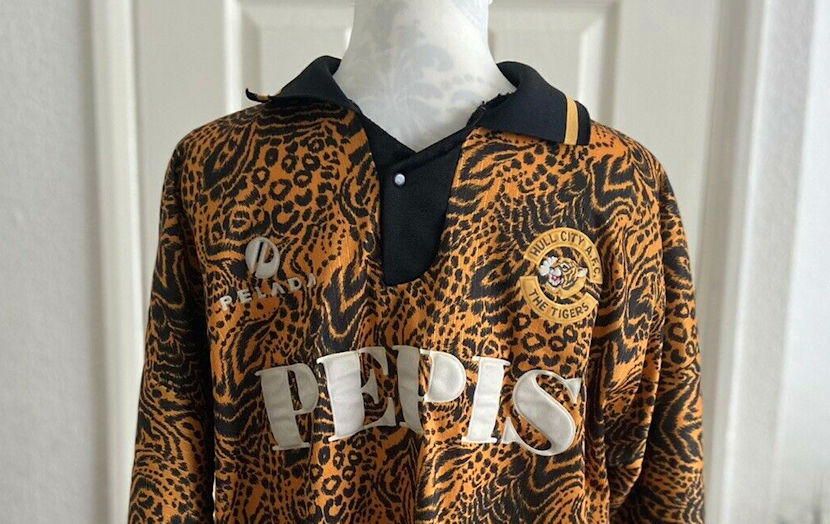 A third shirt listed by the seller of the previous two shirts was this 1999/00 home shirt, which went for £72, which is above the average price for a shirt from this season in our experience covering shirts for Auction Action.

If you looking for a 1997/98 home shirt then you’ll do well to find one for less then the £56.50 that was paid for this one. A reasonable price for a shirt that is in good condition – even if it is signed by Duane Darby!

Though no newly listed match worn shirts were available in January this multi-relisted 2009/10 home shirt worn by/issued to Anthony Gardner. It has been on eBay for a long time without selling, but the lack of match-worn competition could have aided its sale. A price of £50 was enough to find this shirt a new home.

I’ve started including printed-up replicas in recent editions so here are the latest shirts with namesets to go under the virtual auction hammer. Shirts with James Chester, former player-manager Mark Hateley* and the man who was that good, they named him twice Jay-Jay Okocha, printed on the back all sold for prices between £25 and £80.

*Bear in mind that namesets didn’t appear on Hull City player shirts in 1998/99, and certainly not using the Premier League typeface of the era.

Straw clutching leads me to include one last listing, this 5 shirt bundle that sold towards the end of the month for £67. That shouldn’t be considered a bargain in my opinion, however there are some belters included. Take a look for yourself…

That’s all for January’s Auction Action, I will be back early in March to cover February, when hopefully there’ll be some match-worn interest to discuss.