We’re back with the first Auction Action of 2020, casting an eye over the best Hull City apparel that has been up for grabs on online auction sites in January, and furrowing our brows/stroking our facial hair at the latest valuations. Something is only worth what someone is going to pay, right?

One purported match issue/worn shirt available in early January was a Harry Maguire 2016/17 home shirt, with bidding ending at £67. This item was listed by the same seller who sold an Andy Robertson shirt in November 2019 that fetched £75.44. Looking at the sellers other items, it’s hard to not be sceptical about how genuine their stuff is.

How does someone in Hong Kong get hold of a couple of issued Steven Gerrard Liverpool shirts, or several Frank Lampard Chelsea shirts? Why would they let them go for under £100? It isn’t difficult to get hold of player size Premier League patches, numbers and letters and apply them to a shirt yourself. Something doesn’t smell right about the Maguire shirt, and we’re all glad to have stayed away from it.

There have been a lot of replica shirts listed since we last did an Auction Action, and the breadth of choice has been really good. This 1993/94 home shirt was listed for £250, but sold for £180 when someone made an offer.

The price of the tiger print shirts isn’t showing any sign of letting up, most that have sold recently have fetched over £100.

January is a natural time to have a clear out of old stuff, and some eBay sellers have been helping shirt collectors fill some gaps in their polyester stashes. This 1997/98 away shirt went for £65.57 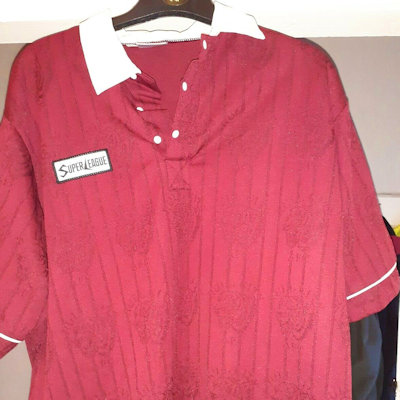 Perhaps the most intriguing listing was for what appears to be a prototype of the 1995/96 away shirt. This draft version of the lovely maroon/blood red shirt has

a white polo collar and sleeve cuff piping, and though there is no club crest or IBC sponsor the repeating tigerhead Jacquard weave identifies it as a Hull City garment.

This got our tastebuds tingling at HCK, but a bitter taste remained when it sold for a mere £7.50 and we failed to add it into our collections.

And to finish we’ll take a quick look at this 1998/99 home shirt from our great escape season. Listed as an auction starting at £29.99 one buyer wasn’t hanging around after an offer of £60 including postage was enough to tempt the seller to end the auction not long after it started.

That’s all for this edition of Auction Action, we’ll be keeping our eyes peeling over the coming weeks and will bring you another edition soon!