Sex sells they say, but not always for much. ‘Chambermaid Julia’, an eBay seller, paired what appeared to be an unsponsored 1995-97 City away shirt with suspenders while modelling the size small shirt for a recent auction.

Though the seller’s marketing style drew attention on the #hcafc Twitter hashtag, the shirt garnered only two bids, selling for a mere £5.50.

Is this a reflection on Julia’s charms or on the lack of City fans that can get into a small shirt? We may never know, but a large Liverpool shirt went for just £11.50, despite a whole lot of leg being on show in the item photo . 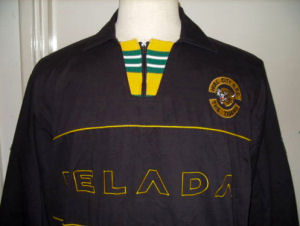 Fans of foreign words may know that Pelada is a Portuguese term that roughly translates as ‘naked’ and is used in Brazil to describe kickabouts, ‘stripped down’ games of football if you will.

Pelada is also a Melton Mowbray based teamwear manufacturer who back in the mid-90s made kits for West Brom, Reading, Mansfield and City. They were tasked with making a non-copyright violating facsimile of Matchwinner’s tiger stripe 1992/93 kit but succeeded only in producing the vilest City home shirt EVER! They did produce a moderately handsome jade, white and black away kit though. Oddly, all the training gear featured green trim (this appears to be a Pelada thing, referencing Brazil throughout their range), and this City training jacket had three green stripes split by two white stripes on its zip up collar.

The jacket was bid on seven times by three seperate bidders and sold for £46.00. 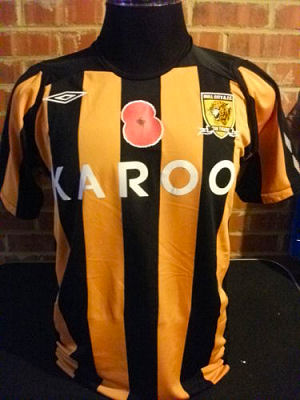 We can’t help but wonder if whoever bought this shirt thinks they now own something matchworn or player issued, even though the seller, ‘legendsandicons’, didn’t list the shirt that way.

City only started using poppy appliqués in 2009/10, the season after this shirt was worn, furthermore this shirt doesn’t have the Premier League sleeve transfers.

A shirt that might well have been worn by Deano is this long sleeved ‘Super League’ 1995-97 home shirt that has the correct competition badges on the sleeves and number 10 on the back in the appropriate typeface for a player worn shirt. The auction is still live if you fancy bidding, but as always remember the first rule of bidding, caveat emptor! 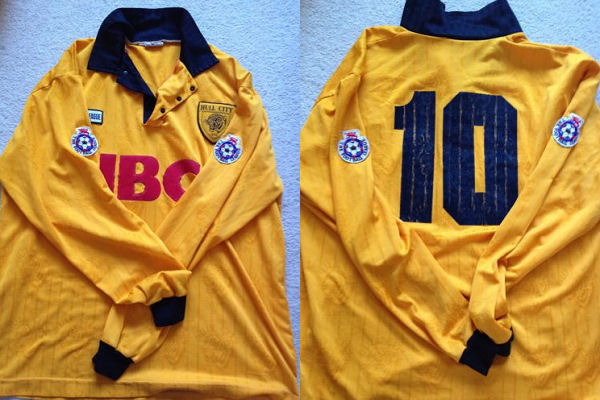 Get Your Kits Out #1