Throughout February and March, we’ve been keeping an obsessive eye on the Hull City memorabilia available via online auction sites, with a particular focus on shirts, match issued or otherwise.

Within 10 days of Kamil and Jarrod leaving the club, we saw a Grosicki 2019/20 home shirt and a Bowen 2019/20 third shirt listed online. These both sold for £40 rather quickly, and the listings and sales seem to demonstrate that some City fans can ‘move on’ from after the loss of star players more readily than others.

It isn’t often that you’ll see a 1990/92 replica home shirt crop up for auction, shirts from that era are quite sought after, but this one which appeared to be in great nick for thirty years old sold for £84.00. 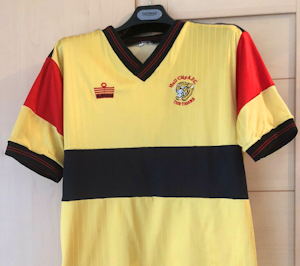 Shirts from the 1980’s are seen even less, so when this replica 1986/87 home shirt was listed it grabbed our attention straight away.

It sold for £127, confirming our suspicion that some of the £200+ buy it now asking prices are beyond what most people are willing to pay, and a shirt’s true value is what a buyer will pay, not what a seller asks for.

We’ve encountered a fair few people who think a shirt on sale for £200+ on eBay means that the shirt they have in the loft is worth that.

This 2009/10 match issued/worn Dean Marney home shirt has been available to purchase for some time now, but someone finally snapped it up for £75. Unlike nowadays, when players are discouraged from giving away match shirts by wage docking, the club had no such qualms a decade ago, making the 2009/10 home shirt the most commonly available matchworn. As a result, they take longer to sell, and go for sub-£100.

Trainingwear worn by a gaffer is a niche collector piece, and this Leonid Slutsky training shirt will have appealed to someone. Featuring Leonid’s initials above the Umbro branding, it’s highly likely this was issued to the Russian for his six month stint at the club in 2017, and at £36 it wouldn’t have broken the buyer’s bank.

Another match worn sold, was this unwashed and muddy 2012/13 David Meyler home shirt from his first season at the club. Unfortunately, this shirt has been dedicated to someone a with marker pen, which will have reduced the price someone was willing to pay. We at HCK discussed it and one of us would have gone for it if it weren’t for the dedication. It sold for £100, which is a great price so long as your name is John…

If you’re a shirt collector you’ll naturally develop an instinct for spotting a fake. Some less discriminating soul purchased this 2009/10 home shirt with Altidore 9 on the back, Premier League sleeve patches and a poppy appliqué on the front. The poppy applied is clearly of the late 2010s type (a heat transfer patch) and misses the game detail added to the first City poppy shirts worn against Stoke. It went for £45.

Shirt bundles were in vogue in March as we all hunkered down to avoid Covid-19, self-isolation encouraged some folk to clear out their lofts and garages it seems.

Bundles aren’t the best way to sell shirts, but they’re not a bad way to buy them! The first bundle consisted of three replica primary shirts from the 1997/98, 2004/05 and 2006/07 seasons and sold for £45 including postage. You’d expect to pay around that price for just a replica 1997/98 shirt, so to get three is a bonus for whoever picked this bundle up.

The second bundle sold by the same seller was for a further two home shirts from 1999/00 and 2000/01. These sold for £42 including postage. Another decent price (for the buyer) for two City shirts from the latter years at Boothferry Park.

A signed and framed 2015/16 home shirt with a Play-Off winners medal was listed twice in March. Initially available for £50 buy it now, a bidding frenzy saw it end at £345, but it seems the winning bidder didn’t complete the purchase, violating eBay rules.

The item, which the seller says they won at an auction, was re-listed a week or so later and at the second time of asking it sold for £208 including postage.

Another seller having a clear out in March listed no less than four match worn shirts all within a few days of each other. £150 would have gotten you Jackson Irvine’s shirt from the 2-0 home win against Birmingham in 2018/19.

Also sold was the shirt that the easy to forget David Milinković wore in the 4-0 home defeat at the hands of Derby County in the 2018/19 League Cup. A nice piece for fans of shirts with diacritics for £100, but other than that, meh! 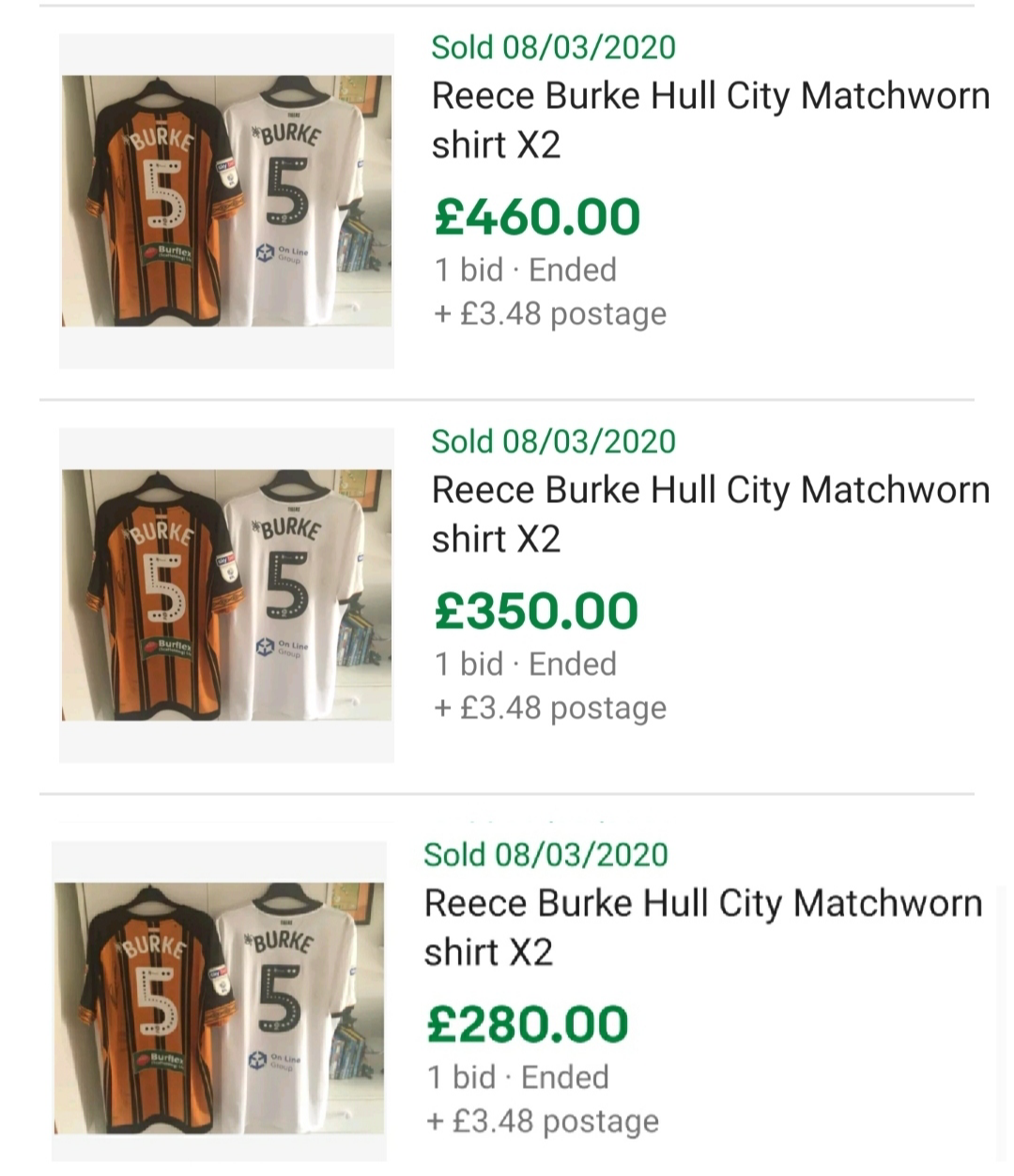 We’re looking for answers on a postcard for the next one. These two Reece Burke shirts from 2018/19 and 2019/20 sold as completed listings three times, in the same day, with the sale price increasing each time. The pair finally sold for £480.

There’s something very strange about items completing multiple times in the same day.

The last of the match worn shirts sold in March was a 2010/11 James Harper home which was listed with an £80 asking price but it went for around £60 on offer.

Finally, we‘ve spoken a bit about valuations of original tiger print replicas of late. Such a shirt sold in March for £222, increasing the median value of 1992/93 replicas.