Christmas might be a time of giving, but the slightly lesser known holiday of Kitmas is all about buying yourself some petroleum by-product that has been rendered into athletic garb. Did Father Kitmas visit you in late December? If so, chances are that polyester was once a listing on eBay or another auction website, and @MikeyCarter90 tracked it until the virtual hammer fell…

Citing the tardy dispatch of garments by the club, MatchWornShirts.com elected to extend the auctions of the 2021 poppy shirt by a week, with a new end date of December 4th.

The shirts worn by City at Barnsley could be bid for once the game kicked off on November 6th, and these shirts were joined by additional shirts from the Coventry and West Brom games the morning of the auction lot end date, with each shirt now photographed instead of being represented by a computer aided design avatar.

In total, 40 worn or issued shirts featuring a remembrance poppy appliqué were listed, sparking a frenzy of bidding activity, which ultimately amounted to £10,439 in sales. This sounds like a lot, but that would barely have covered a sleeve cuff if you wanted another shirt listed by MatchWornShirts.com : Two shirts purported to have been worn by Cristiano Ronaldo for Manchester United against Tottenham and Manchester City went for a combined £64,304.

And you thought someone paid over the odds for Greg Docherty’s shirt! You can see the singular values of all the City poppy shirts below; 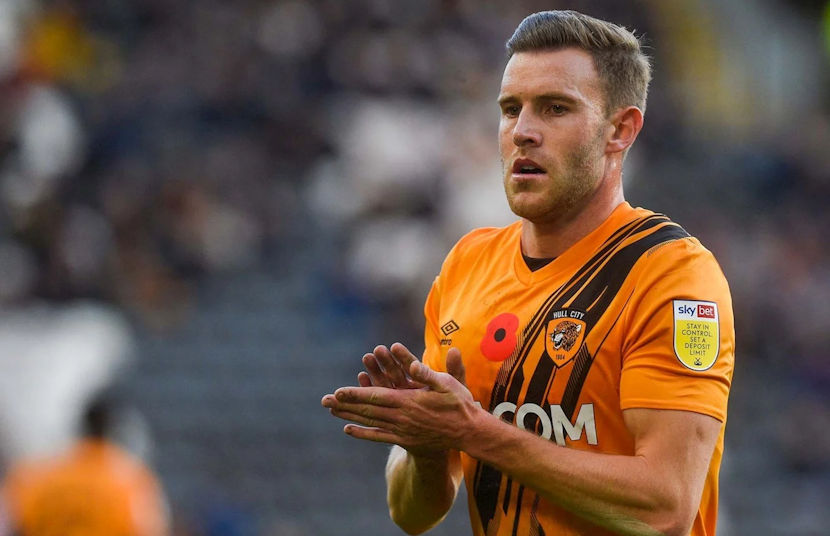 Moving away from poppy shirts and on to regular player issue/worn items, this 1998-99 home shirt, number 14, sold for £125 or best offer. This shirt was from the last season without squad numbers in the Football League, when starting players were given shirts 1-11 and the three subs tended to be 12, 13 or 14. Player-boss Mark Hateley favoured 14 when a substitute, and rumour had it his extremely late introduction in games was more about getting an appearance bonus than changing the outcome of a game. Before he was dismissed with City bottom of the entire league that is, and Warren Joyce became player-manager and heroically guided us to survival, a feat known as the ‘Great Escape’.

There were two distinct versions of these shirts: a player-spec batch had fully embroidered crests and Olympic Sport necktags, and a later batch which had the same crest and neck tag treatment as replicas. This shirt is from the second batch, which shares the same construction as those sold in Tiger Leisure, but long sleeved versions never went on retail sale and were kept just for players. Given how quickly this one sold I would guess that the £125 was paid straight away. If it was listed as an auction, I feel it could have surpassed £200, so someone here grabbed a bargain!

This Damien Delaney shirt was listed as a 2003/04 matchworn, but Delaney wore 16 in that campaign. He wore 28 when he first joined us, making this a 2002/03 shirt, this design being the last home kit worn for more than one season. As well as competition sleeve patches, this shirt features a signature. As autographs on shirts go, this is one of the worst examples ever, being over-sized and somewhat wonky. Listed at £99.99 and offer of likely more in my opinion, was accepted on this shirt before the auction ended.

A Mo Diame 2014/15 player issued away shirt sold for £144.99, by a company who claim to specialise in match worn shirts. It ticks all the boxes for being a player shirt, but for some reason I’m not completely sure. Maybe it’s the atypically high name placement.

Onto replicas, and naturally we start with tiger stripe shirts, as there is nary a month passes without one being listed these days. This one is of the 1993/94 Pelada/Pepis variety, and it was listed as a 7-day auction starting at £350. One bid 4 minutes from the end won this size medium shirt.

If Spanish Jon was your cup of tea during 2019/20 and you regretted not getting his name on the back of your shirt, you could have picked up this away shirt printed with ‘Toral 10’ on the reverse for £40.

On 20th December the club announced that the 2021/22 ‘blackout’ away shirt would be retained for the 2022/23 season as a third shirt. Before this, on 7th December, the club held a members only exclusive offer for their current stock of the kit! Within 24 hours they sold out for the second time as the 2021/22 away shirt proves to be one of the most popular Hull City shirts ever! Shortly after this period of exclusivity, in which members could buy up to three shirts each, and before the club announced its retention for 2022/23, some blackout shirts resurfaced online and went for more than RRP.

I have picked out 6 that sold, which in the grand scheme of things probably isn’t that many. Of the 6 there were 3 medium, 2 large and 1 XXL and below is what they sold for.

In the kingdom of sold-out shirts, the coin eyed meff is king! Some people might have felt pressure to get a shirt for a loved one before Christmas and this may explain a willingness to pay above retail price, either way it is what it is, but with more stock on the way ahead of the 2022/23 season, we will get to enjoy the blackout shirt a while longer.