If July represented famine, would August and the start of the 2021/22 season see a swing towards a feast of available Tigers merch and memorabilia? Intrepid eBay hound Mike Carter (@MikeyCarter90) takes us through the August Auction Action…

After the disappointment of July, high hopes for a more fertile August initially looked unfounded, but as the month progressed things picked up dramatically, ending with a tiger stripe shirt bang.

Conspicuous shirt collecting exploded during the Covid-19 lockdown, driving up prices on notable older shirts, especially bold 1990s designs such as the Arsenal ‘Bruised Banana’ and the Dortmund ‘NeonGelb’ collection, shirts that transcended appeal among supporters of those clubs and lodged themselves in the consciousness of kitgeeks.

The Hull City shirts that achieved that level of fame/notoriety and global appeal are of course the tiger striped Matchwinner and Pelada designs from 1992/93 and 1993-95 respectively. We’ve tracked the staggering increase in what people are prepared to pay, or at least bid, for these shirts and wondered if we’d reached peak spend for a replica when a 1992/93 home shirt hit the £550 mark.

Well, that amount was surpassed in August 2021, as an auction for one ended at £670, a truly mind blowing amount, though there is a twist… the item has been relisted, suggesting the auction winner got cold feet and welched out of payment.

There was another 1992/93 home shirt up for grabs in August, only this time it was a  child’s replica. A 30″ chest, it finished at £116. A good buy for someone with a City mad kid, or even as an option to frame in a backyard bar!

Though 1993/94 home shirts have proven less desirable than their predecessor, they still command a solid fee when available online. Someone paid £301 for this one and I think that’s spot-on for what someone should be paying. We’ve seen them go for less, and seen them go for more but this feels like the median selling value.

More of a leisurewear release than a replica, the Xmas 1994 limited edition Pelada/Needlers Sweets shirt is another that is quite sought after. Size is everything when it comes to resale value and as we saw earlier a child’s replica shirt will command a price lower than what you’d expect to pay for an  adult replica in, say, Large/XL. This one, described as size boys 9-10, with Windass 10 on the back curiously applied in red, sold for £25.

Staying in the 90s, this 1998/99 home shirt was available. Listed as a buy it now for £88 it sold shortly after being listed. We’ve seen evidence of this shirt selling for more, so someone certainly picked up a bargain here. 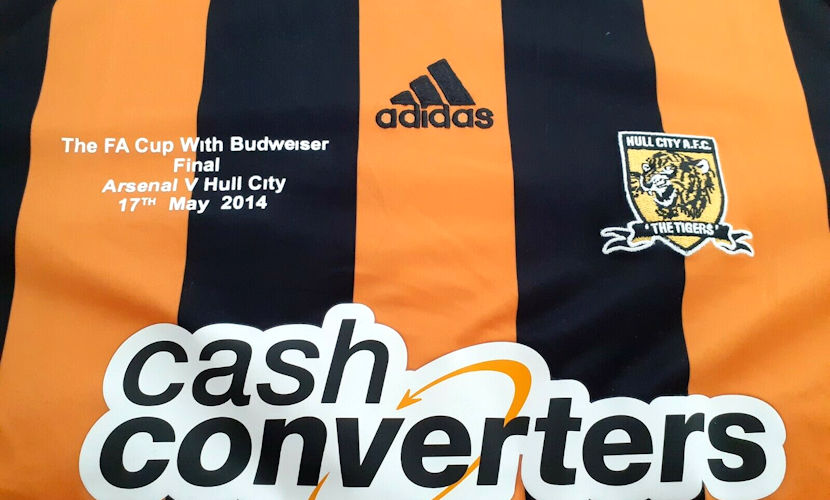 City never sold 2013/14 replica shirts with FA Cup Final game detail, replica stocks were all gone by the time City made a third trip to Wembley, but some people fashioned their own ‘Cup Final shirts’.  This shirt printed with game detail and competition sleeve patches sold for £57.56. The typeface used is quite similar to the real thing, but i’s are not dotted as they should be, and capitalisation has been used on the versus ‘v’ and the ‘th’ in 17th.

That’s all for this edition of Auction Action, which will return early in October to cover items sold in September. Don’t forget now: Caveat emptor!