Collectors of matchworn Hull City shirts had nothing to bid for on eBay in July, but it proved to be a pregnant pause, as in August a flood of matchworns hit the virtual auction house’s listings. Woop!

First up was this 2019/20 Reece Burke third shirt. Third shirts have, in our experience, been hard to come by in recent seasons, and the same can be said of change shirts, and in this case the buyer didn’t hang around. An offer of £220 brought this listing to an immediate end not long after it first appeared. The shirt had previously appeared on Facebook Marketplace and was quickly snapped up and flipped on eBay.

This poppy shirt issued to Jon Toral in November 2019 sold for £129.99, providing more evidence that charity shirts tend to depreciate in value, though not by much in this case, as the shirt went for £170 when first available from matchwornshirt.com via the Royal British Legion.

Hull City Kits was delighted to be approached by former Tiger Caleb Folan in August, to auction some of his matchworn shirts in support of Macmillan nurses and the Cystic Fibrosis Trust. After some homework studying images of Caleb in action we were able to match the shirts to known games, a 2007/08 home shirt was worn by Folan against Leicester, and Caleb wore the 2008/09 away shirt at Sunderland. One buyer picked up both shirts and paid over £550 for the pair! It was painful to see them leave our kitroom, but some great causes benefited. Thanks for the opportunity to collaborate Caleb! 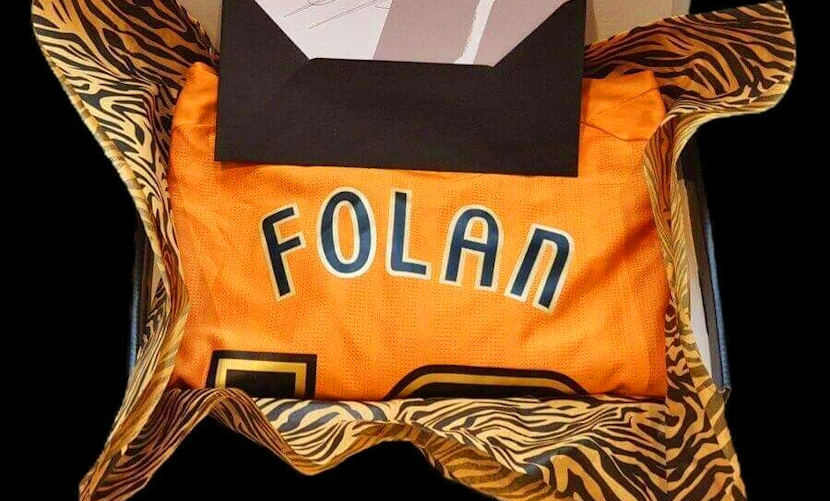 More player worn or issued shirts were auctioned for charity in August, but not on eBay. The ‘Heads Up’ appliqué shirts used in the Championship fixture at Reading in February 2020 were made available via the Football Aid website. Final sale prices are not shown on the site, but the club stated that a total of £2713 was raised with most of that going to mental health charities.

A most interesting listing in August involved a bundle of coach worn items. First added to eBay as ‘training wear with the initials CF that could be removed’ with a £2 start price, it was later given a £100 price tag and the listing amended to ‘Craig Fagan training wear’… It failed to sell first time round but eventually went for £80 via an offer after being relisted with a £40 start price.

The first replica that caught my eye was this 1992/93 away shirt that fetched £100, even with some significant damage. Personally, I think the buyer has overpaid for a shirt in this condition, but prices recently have been very unpredictable. Take a look at the listing and see what you think?

This 1995/97 away shirt sold for a modest £52 this month. Photography is key to maximising your potential when selling on auction sites and I genuinely feel this shirt would have finished higher if the seller had improved the quality of their listing image. Recently sales have been upwards of £70.

It’s not often you’ll see three of the same vintage style shirt sell in the same month, it’s even rarer that shirt is the 1988-90 home shirt! The three listings finished at £125, £150 (potentially with a lower offer) and £182. What I found most interesting is that the shirt that finished at £182, was started as a 99p auction and the other two ‘buy it now’. This assisted in maximising the value for the buyer. A smart move from the seller on this occasion.

We’re going to stay in the 1980s for the next two items. This 1984-86 home shirt sold for £140, which along with the three sales above gives us a true indication of the value a replica shirt from the 1980s holds. Anyone paying over £200 should probably consider themselves to be over paying.

If this 1985 track jacket was an adult size, I’d predict that it would likely have finished for double the sale price. However, just £23.30 was paid for this junior track jacket. Someone somewhere is going to have a kid looking very dapper on the League One terraces next season in this Admiral stunner!

That’s it for August, we’ll see you on the flip side of September!