We interrupt this promotion celebration to bring you the regularly scheduled programming of Auction Action. Yes, it’s time to cast our eyes, or at least those of Mike Carter, over the Hull City shirts that have been available to buy via online auction sites or for a fixed price on the Tiger Leisure site, official e-club shop of the 2020/21 League One Champions! **cheesy grin**

We’ll start with a shirt that was listed towards the end of March but concluded early in April, and is to date the most expensive, and perhaps most bizarre City shirt sale of 2021. A match-issue, 1992/93 home shirt with long sleeves and the number 15 on the reverse sold for an incredible £1926! ONE THOUSAND, NINE HUNDRED AND TWENTY-SIX POUNDS STERLING! The player-spec shirt, with fully stitched club crest and supplier logo, might have been used during pre-season, but not in the regular season when only two substitutes were permitted per game. Tiger print shirts have soared in value in the last 12 months, with replicas going for between £266-£562 this year, but even so, this shirt (seemingly sold by a former youth team player who has a few souvenirs from his time at the club) selling for just shy of £2000 is quite staggering. An explanation of sorts came when the purchaser contacted HCK via Instagram asking when the shirt might have been used and by which players. The buyer was from Bangkok in Thailand, and part of the fiercely competitive football shirt collecting scene in Asia, a continent now home to some of the finest matchworn shirts on the planet.

A big money shirt sale is invariably followed by similar items hitting the market, and though there were no more player shirts listed in April, owners of replica tiger print shirts were encouraged to part with their vintage polyester, hoping it would go for a price similar to the £562 spent on a 1992/93 home shirt in March! Let’s see how they got on… 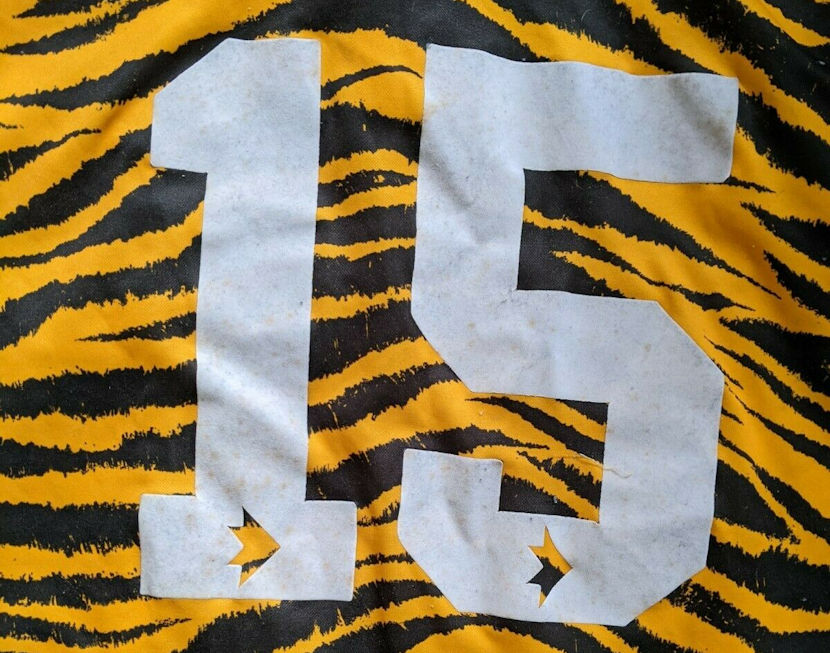 I’ve spoken before about the size of a shirt being a determining factor on resale value in the modern-day market, and the final price of three 1992/93 home shirts that were listed within days of each other gives that thesis some supporting evidence: The first was a size small that fetched £290. The second was a medium and that finished at £255, and the third was a large, which sold for £510. A flooded market can lead to a decrease in values overall, so that could be why two went for sub-£300, but I believe shirt size was the main driver here. It’s also worth noting that the third and most expensive of the 1992/93 shirts started with the lowest price. A clear attention-grabbing tactic when selling on eBay, and not that risky when the item is highly sought after.

More 1992/93 home shirts went under eBay’s electronic hammer, but a few weeks after the player-spec shirt inspired ‘boom’ at the beginning of the month.

This shirt has seen better days. Its sponsor is peeling off and part of it is completely missing! This didn’t stop someone throwing £175 at it though…

The sixth and final (for April anyway) Matchwinner tiger stripe shirt that we’ll cover is a size medium that sold for £266. Near to the average for those replicas sold in April, but significantly less than the top prices of previous months, a symptom of tiger print shirt market saturation, I believe. It will be interesting to see what the next one goes for since the dust has now settled.

This column is starting to look like Bobbi Hadgraft’s wardrobe*, such is the animal print focus, so let’s move onto other shirts sold, such as the match-worns snapped up in April.

We are staying in the 1990s for the first shirt, a number 7 1993/94 away worn by Richard Peacock. The auction started at £200 and raised £320 (less fees) for the seller. I’d say this was a good deal for both the seller and buyer, so hopefully everyone (except the bidders that missed out) was happy.

The last City home shirt used for more than one season was the Patrick branded 2002-04 design. One of them, worn by local lad Gary Bradshaw during the 2002/03 season was available. It was picked up for a buy it now price of £89.99. I’d say that is an impressive price for the buyer, but it’s a shame that the shirt is squad signed on the reverse. This does appeal to some, but it takes away from the appeal of a shirt to me.

The final match-worn shirt on eBay for April was a 2008/09 Sam Ricketts home shirt in a frame. The seller kindly offered to sell the shirt sans-frame if a buyer so desired it, and it sold for £185. I fully expected this to finish at £100 or under, but a frenzy of bidding in the last minutes of the auction. The seller should be really pleased.

In a pleasing turn of events, City listed the shirts worn by players in the promotion clinching game at Lincoln on Tiger Leisure. They were listed at £150 each, a great price for a shirt worn in a now celebrated fixture. The players who didn’t feature but warmed the bench had their shirts listed at £120. The club announced the availability on social media and they sold out within 30 minutes of going live.

The shirts were sent out unwashed and unsigned. They’re straight off the players’ backs. Were you lucky enough to pick one up? Let us know @HullCityKits on any social media platform.

We questioned the authenticity of a 2004/05 home shirt ‘worn’ by Stuart Elliott in March’s Auction Action, because it was size XXL. It was relisted in April and sold for a second time. File under ‘shirts that make you go hmmmm…’

Onto non-tigerskin replicas… Listed together, this pair of 1999/00 shirts sold for £80 soon after being listed, an absolute bargain for the buyer.

Curiously, a week or so later, another seller listed and sold two shirts from 1999/00 seperately, a home and away shirt. The home shirt was listed £75 but may have sold for less if an offer was accepted. and the away shirt sold for up to £85. Shirt flipping? It’s likely.

That concludes April’s shirt sale highlights. The question we now consider is ‘will promotion have an impact on vintage City shirt prices?’ We’ll let you know at the start of June when we review the May Auction Action. Until then…