Though many physical retail outlets have had to close their doors during the Covid-19 lockdown, online sales have for the most part been unaffected. Has this inspired mass loft and garage rummaging for matchworns and replicas to list on eBay, and in turn some boredom busting buying of Hull City shirts? Let’s see in the April 2020 edition of Auction Action with @MikeyCarter90…

First up is an interesting saga of quick resales! Initially available on a social media group, two match spec City shirts made it onto eBay. First up is this 2015/16 home shirt worn by Jake Livermore, which had a £50 starting price but sold for £80.

Next up from the same seller is this 2014/15 home shirt, again likely worn by Jake Livermore.  The interesting thing about this shirt is that it wasn’t listed as a match issue shirt, but appears to be player spec looking at the name and number set. The shirt was listed as an auction with a £20 start price but was picked up for a £50 offer. 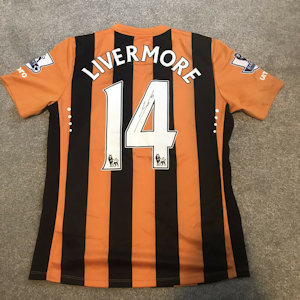 Now, here’s where things get tasty… A week after the 2014/15 Livermore shirt had finished, it reappeared on eBay with a start price of £170! Yes, you read that right. Over the following days, the price dropped a few times, settling at £120.  I was unsure if someone would even pay £120, so was stunned to see it go for £200! Unbelievable! Flipping items is no new thing, and there isn’t anything to say you can’t make a profit on something you’ve just bought, but the original seller will be kicking themselves if they are reading this…

Remember back in 2019 we covered a 2016/17 Andy Robertson home shirt? No? Well, we have a good memory here at HCK HQ. A new Robertson shirt was listed by the same seller as the first. We know it’s a distinct shirt because we scrutinised the name alignment and they differ. We were already highly sceptical of this seller, due to the other items they had for sale, but this has settled it for us. We don’t think this has been anywhere near Hull City or Andy Robertson. It sold for £72 which on the face of it looks cheap, but we’d be very questionable over its authenticity.

Who doesn’t love a job lot? This bundle of replicas was initially listed at £150, before being lowered to £120. An offer of £100 including postage was enough to seal the deal on this bundle though! 14 shirts for £100 is around £7 a shirt, a bargain for someone wanting to start a collection, even if most of them are relativity modern. They even got a few scarves too for their trouble. (half and half scarfs? Yuk! – Ed)

This 1990/92 home shirt replica has been listed on eBay for a while now, and I always thought it might be the price putting people off, but someone has pulled the trigger on this shirt, perhaps in a fit of lockdown madness. £150 is higher than we’d expect to pay but it certainly is a beautiful piece of polyester.

I spoke about shirts from the 1980s in the Feb/Mar edition of Auction Action and how hard they are to come by. Well, my theory has been shot to bits as another has sold, and one will likely feature in May’s edition too! This 1984-86 home shirt sold for £154, a similar amount to another shirt from the 1980s which sold in February. The only downside is the size, with a chest measurement of 35/37 inches, it wouldn’t fit most adults.

Being a shirt collector for as many years as we all have, you get an eye for being able to spot things that are not quite right. This is exactly what we have here. This 2013/14 home shirt is a printed up replica and not a match worn shirt as listed. Now, this could have been given to a fan from George Boyd, but it’s certainly only a replica. The number on the reverse isn’t pro size or pro thickness. A telltale sign from a photo is if you can see the black stripes on the shirt through the number, it’s normally a replica. Have a look for yourself and see what you think…

Back to the 1990s… this 1990-92 away shirt replica sold for around £130 with postage. Its one of the harder to locate shirts from the 90s hence the large price tag. Probably about right in terms of price.

Remaining in the decade of turquoise shell suits, dial-up internet and baggy football shirts for our final entry to April’s Auction Action… this 1994 special edition shirt by Pelada likely sold for less than the £225 listing price due to it having a best offer option, but it probably still commanded a good price for the seller. Again, this shirt is on the small side, so wouldn’t fit most adults.

That’s all we have for now, come back early in June and see what May had in store for us!