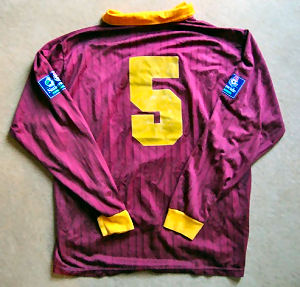 Whether the April fools were those who paid hefty sums for shirts or those who missed out on them is very much a matter of perspective, but the bidding for City kits was frenzied last month.

If this seventies home shirt said to be worn by Chris Chilton is genuine, it’s an absolute snip at £150 given that the seller got him to sign it. What catches our eye about it is the stitched on number 9 being white. Amazing.

The Club relisted Josh Kings shirt from the Leeds and Ipswich games, it features the Help the Hospices patch used by all Football League teams in March and fetched £113.88.

Early 80’s replicas continue to go for over £150, this Arrow Air sponsored number 9 Admiral home shirt raised £195 after 9 bids, and a white Admiral away shirt (that was used throughout Admiral’s 6 year stint as kit supplier) went for £170 after 13 bids.

Tiger stripe 1992/1993 home shirts also remain big draws. Despite the faded club crest this shirt attracted 22 bids and sold for £124. The same seller may have gotten more than £51 for a limited edition though never used in games ‘Needler’s shirt’ had it not had a small hole in it. 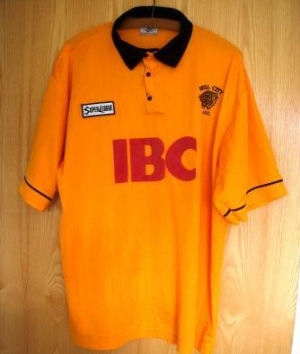 The most intriguing of the shirts sold in April was a Super League 1995-97 home shirt that appears to have been a prototype, though the seller believes it was worn in a pre-season friendly.

The club crest  used on this jersey was the type used on the follow up kits from 1997/98, for 1995-97 though a large sewn on shield shaped patch containing the crest within a smaller shield.

On the back of this shirt a number 5 has a drop shadow, whereas the shirts used by the club throughout the two seasons they were worn had a simpler number font. Club used or not, this is a fascinating item, and we were surprised it went for a mere £31.50 after garnering 14 bids. Perhaps we should have had a punt on this one.

As we enter May, there are already some interesting shirts for sale on Ebay and elsewhere, happy hunting Kit Nerds!