Welcome back for Auction Action. March was a fun month for collectors of Hull City shirts, and here’s what I think were the most noteworthy sales on the online platforms.

A disclaimer – eBay have changed what information is disclosed on a completed auction, they know longer post the final price where a best offer has been accepted. In the past, I’ve been able to state what an item went for in that scenario, but no longer.

Right, now that’s out the way, let’s cast our eyes over the match-worn goodness you could have bought in March!

Firstly this 2004/05 home shirt appeared on eBay and was quickly snapped up, shortly after being listed. It was worn by Robbie Stockdale during the latter half of the 2004/05 promotion season where City finished 2nd in League One. It sold for £95.99, a bargain price for a style of shirt hard to source as a match-worn.

George Long’s match-worn shirt from the 1-0 home defeat against West Brom in November 2019 was listed with a £50 start price, with a best offer option. This fixture was a remembrance fixture, therefore, featured a poppy applique on the chest. An offer was accepted by the seller, however as previously stated we can’t be sure what that was, but we suspect it was around £160 after one of the HCK crew made enquiries with the seller.

There have been some match-worns repeatedly listed for over a year without any takers, but just as every dog has it’s day every player shirt appeals to someone eventually. A 2013/14 home shirt worn by the Honduran Maynor Figueroa finally sold for £99.95.

The last ‘match-worn’ to cover is this shirt listed as used in match action by God fearing, cartwheel performing Ulsterman Stuart Elliott. This got us geek kits scratching our heads because the shirt size is 2XL. When we think back to 2004/05, we don’t exactly see Elliott running down that right-wing in something more akin to a parachute than athletic garment… something seems amiss here to us, however, someone was tempted enough to purchase it at the start price of £99.95.

Moving into the replica sales we have seen more availability from the 1980s in March. Within a fortnight of each other, we witnessed two 1984-86 home shirts sell. The first, described by the seller as “pristine” and a “NEVER WORN collecters gem”, I would guess sold for around £175 after the best offer option was accepted and the second, listed by a trusted seller who has an impressive knack for sourcing deadstock, sold for £160 after 18 bids. Both shirts are on the small side and wouldn’t fit most adults. We’ve consistently seen shirts of a smaller size sell for around this price whilst completing Auction Action.

A shirt that is popular when listed is the 1994/95 limited edition shirt by Pelada. One sold for £199.99 towards the beginning of the month and another sold for £100 at the end of it. Two very different prices, however, both were listed as a buy it now. The second one listed at £100 sold on the day it was placed on eBay.  It would appear that someone could benefit from reading Auction Action…

Staying in the 1990s, this 1995-97 away shirt sold for £165. This is a shirt that seems to be in higher demand than ever. Whilst I’ve been covering Auction Action, I’ve seen this sell multiple times for less than £100, so this is one to keep an eye over after reaching a new peak in its selling value. 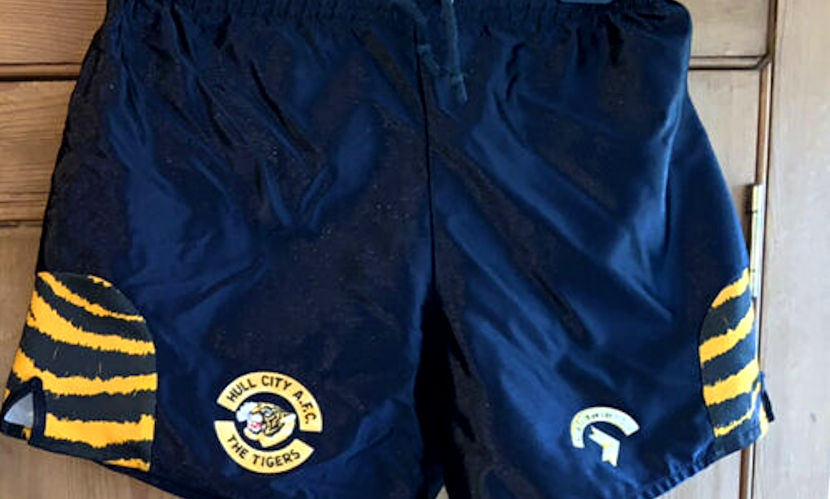 These next items were both listed by the same seller, and I almost feel that it deserves its own off-shoot of Auction Action, because of how ridiculous it is getting. This 1992/93 home shirt sold for £562. Yes, that’s five hundred and sixty-two pounds! For a replica shirt… just wow. What on earth is going on with the demand for the original tiger print shirts. The listing became ‘Twitter famous’ as it poured across the fan base, ultimately leading to more being listed on eBay in the hope of half a grand glory. April’s edition could well be full of these so watch this space.

The same seller also listed a pair of matching replica shorts that sold for £205. I don’t think I’ve ever seen anyone pay as much for a pair of Hull City shorts in my life.

The appeal for personalised replica shirts is running strong at the moment. Each month I’ve plucked a few of the best to discuss and this month is no different. Shirts ranging from 2009 to 2021 have been available with star players names on the back. We’ve seen shirts with Elmohamady, Grosicki, Honeyman, Davies and Barmby sell in March. The prices ranged from £20 to £36. Shirts with a players name on the back appear to sell for more than their plain backed replica counterparts. Is getting a shirt printed a good idea?

There is one final shirt to cover and it’s a 2007/08 home shirt with Windass #9 printed on the back. It’s just a replica with a programme from the 2007/08 Play-Off final. It’s a huge game and moment in Hull City’s history. The shirt will have likely been bought as a memento to remember and celebrate ‘that volley’. The buyer paid up to £99.99 for this item with the best offer option active on this listing.

That’s all for March’s Auction Action. We’ll be back in May, to take a look at April’s sold listings.