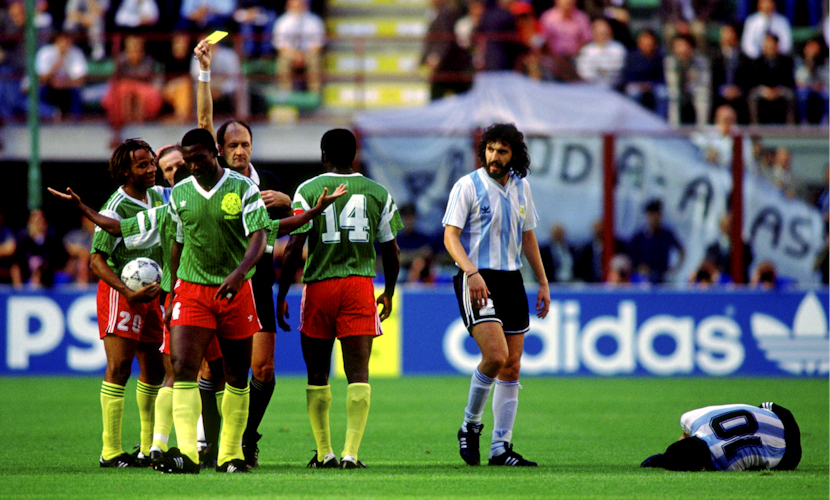 There are some sniffy journalists from broadsheet newspapers who insist that Italia ’90 was in fact dogtod, and that we must all immediately critically reassess the tournament and agree with them. Perhaps they think we don’t know that it lacked the flair and attacking intent of other finals (it’s the lowest scoring tournament to date) and that defensive approaches and occasionally cynical thuggery were the order of the day.

But of course we do, and besides, who doesn’t marvel at the savage beauty in seeing Claudio Caniggia being kicked up in the air by a series of tackles, each containing more murderous intent than the last? It’s just that regardless of the measly 2.21 goals per game ratio, there is so much to fondly remember about Italia ’90, a tournament low on goals but high on drama…

Then there was the kits, which is naturally our focus.

Half of the 24 teams at the finals had polo collars on their shirts: Austria, Belgium, Brazil, Costa Rica, Czechoslovakia, England, Italy, Netherlands, Scotland, Spain, the Soviet Union and the United Arab Emirates. This was two more than had collars in Mexico ‘86.

Just five teams had a change kit distinct in design from the primary kit, as opposed to having the same template colour swapped, those five were: Argentina, Costa Rica, England, Scotland and West Germany. Though England’s change shirt was at first glance the same style as the home (the collar style and taping was the same), the change featured a pattern that was printed on, whereas the primary shirt had a pattern woven into the fabric.

Some teams had just one set of shorts that were used with both primary and change shirts, while others had two sets of shorts in the same colour, something you can’t imagine happening nowadays. Czechoslovakia and Sweden used the same shorts in every game, whereas the Soviet Union and Egypt had two distinct pairs of white shorts. The ‘primary’ Soviet shorts carried the same geometric pattern as the ‘home’ shirt, wearing a white set without a print with the change shirt. Similarly Egypt had two sets of white shorts, one with red trim for the primary kit, and another with green trim for use with the green change shirt. The same black socks were used in all of the Pharaohs games.

Dye-sublimation was in greater evidence in Italy. At Mexico ‘86 only four sides, Bulgaria, Denmark, Iraq and Portugal had obvious prints on their shirts, but there were twice as many teams with sublimated shirts at Italia ‘90: Austria, Colombia, Czechoslovakia, Soviet Union, Scotland (away shirt), UAE, West Germany and Yugoslavia.

Drop shadow numbers proved very popular, used by half of the teams in the tournament: the hosts Italy and also Austria, Belgium, Cameroon, Colombia, Costa Rica, Czechoslovakia, Egypt, Romania, Soviet Union, Uruguay and West Germany. Most other teams used outlined block numbers, the exceptions being the Netherlands, Ireland (who used the tri-line adidas numbers first seen in the 70s) and USA.

Several teams had shorts numbers that were distinct from the shirt numbers: both of the Umbro teams, England (PHOTO) and Scotland, but also the Netherlands

We were a few years away from all over prints on outfield player shirts, but we were given a preview via goalkeeper kits, especially the adidas jerseys which were somewhat vivid and bold. Popular templates were the Montevideo (used by Czechoslovakia (PHOTO), Soviet Union, USA and Yugoslavia in yellow with grey squiggles, and Romania who had an orange with orange version), the Taifun (used by Romania and most famously, by West Germany’s Bodo Ilgner (PHOTO)) and a multi-coloured top described by the excellent Museum of Jerseys* as the ‘Space Invaders’ jersey (which was worn by Argentina, Colombia (PHOTO) and Egypt). A lot of colourful keeper jerseys were matched with black shorts at Italia ’90, but a noteworthy exception was the purple and yellow Puma get-up issued to Austria’s Klaus Lindenberger which had sensational striped shorts (PHOTO).

*speaking of MoJ, check out their great work cataloguing every kit worn at Italia ’90 and their punishingly comprehensive take on the evolution of adidas goalkeeper jerseys.

West Germany‘s abstract flag pattern primary shirts from Euro ’88 were so good they were reused (PHOTO), the only changes being embroidered adidas logos rather than heat applied plastic and Italia ’90 text. They’re quite possibly the greatest shirts ever, let alone part of the the best Italia ’90 kit. Ina Franzmann’s pattern, which she believed would not be used given the post-war awkwardness surrounding the West German flag, is as fresh now and it was over 30 years ago. The design being reversed for the shirts used in Russia in 2018 (albeit in monochrome) is testament to that.

Franzmann also designed the pattern used on West Germany’s away shirts, worn just once at Italia ’90, in the semi-final against England (PHOTO). Though more readily associated with Holland’s Euro ’88 triumph, the pattern looks great in West Germany’s change colour of green. The template deserves a more exotic name that ‘Ipswich’ (PHOTO) don’t you think?

Colombia‘s shirts shared some traits with the West Germany home (PHOTO), the wrapover crew necks, the ‘batwing’ construction, but the tricolour ribbon is confined to the sleeves. Colombia switching to yellow primary shirts in 1994 makes some people believe they wore their change kit in all three group stage games in Italy, but red shirts were first choice at this juncture.

Umbro’s England primary shirts for the 1986 World Cup looked ahead of the fashion curve with their thin shadow stripes in Mexico, and the double-diamond brand pulled off the same trick four years later in 1990 (PHOTO). The sophisticated Jacquard weave stood out among a mass of shirts with guess what?  Thin shadow stripes.  The smart polo collar over a button up, split inset panel gave this shirt a structured look that made deep V neck shirts such as Cameroon’s home look shapeless in comparison.

That said, there was a fun and funky feel to the kits of Cameroon, who shared a template with Egypt. The brilliant yellow with green contrast trim change shirts, worn only once (PHOTO) and in a chastening 4-0 group stage defeat by the Soviet Union, were the best example of the design.

Yugoslavia‘s underarm lightning bolt primary shirts (PHOTO) provided an assertive look for a team representing six federal units at a tournament for the last time. The Yugoslavia that competed at France ’98 represented only Serbia and Montenegro.

Scotland‘s away kit (PHOTO) might be remembered for the shock 1-0 loss to Costa Rica in Genoa, but it’s a striking and lovely kit nonetheless.

Austria‘s two shirts featured an intriguing pattern of twisted stripes (PHOTO), and placed the Puma logo over the federation crest so the stripes in a vortex design is unbroken. This is a hugely underrated shirt design.

The geometric pattern that decorated the primary shirts of Czechoslovakia (PHOTO) and the Soviet Union (PHOTO) just didn’t work somehow. Mexico might have worn this template too had they not been disqualified from international competition, ruling them out of Italia’ 90.

Cameroon’s use of the change kit green socks v Colombia with their primary shirts and socks gave that outfit a cohesive look (PHOTO) compared to their first choice yellow socked combination.

A number of kits went unused at Italia ’90. You might think that they would belong mostly be teams eliminated at the group stages, but both England and Italy played 7 games without the need to wear anything other than their primary kits. In England’s case they had two full kits unused as they took a third kit (PHOTO) with them. Spain didn’t wear an away shirt, though their change shorts and socks were matched with the home shirt against Uruguay. Brazil and USA wore elements of their change kits, but both sides’ blue shirts went unused.

The size of the number one on Higuita’s shirt was preposterous (PHOTO).

Argentina manager Carlos Bilardo ordered the removal of the side stripes on the primary kit shorts after the opening game defeat against Cameroon (BEFORE PHOTO and AFTER PHOTO).

Two of the teams from former Communist states, Czechoslovakia and Romania, went without Federation crests.  The Czechs favoured a simple flag applique, whereas the Romanian shirts had only the adidas trefoil.

USSR didn’t have the familiar CCCP chest applique in Italy, and this was the last time we’d see the Soviet Union represented in a tournament, the Commonwealth of Independent States (CIS) played in their stead at Euro 92 before the total break-up of the 15 Union members. Similarly Czechoslovakia would no longer see tournament action, they completed 1994 World Cup qualifiers as the Representation of Czechs and Slovaks (RCS) before the football bodies of the Czech Republic and Slovakia became separate entities.

Costa Rica changed primary shirts after the group stage, replacing the white collar and sewn on rectangular Lotto patch versions (PHOTO) for self-coloured collar shirts that had Lotto logo embroidered (PHOTO). They had a shorts and sock change too, choosing navy shorts and plain white socks for the Round of 16 game with Czechoslovakia, abandoning the socks with Lotto logos used against Scotland in Genoa. Their black and white striped change shirts are, according to coach Bora Milutinovic, a nod to Partizan Belgrade who he supports, and not as has been suggested a reference to defunct Costa Rican club side CS Libertad, or a nod to Juventus of Turin, where Costa Rica played two games.

Colombia’s shirts were similar in style to West Germany, but with stripes restricted to just the sleeves and some trim detail on the collar and cuffs. Both team’s shirts had a ‘batwing’ construction, where just two panels were sewn together.

This was the last tournament where Brazil used a Jules Rimet Trophy graphic (PHOTO) instead of the federation logo. It was also the last time Topper made Brazil’s kits – the Seleção Brasileira wore Umbro in 1994 and have been in Nike since 1996.

Official’s were issued all-black kit (PHOTO) for the last time at a World Cup, though red shirts were used when Scotland wore their navy primary shirts.