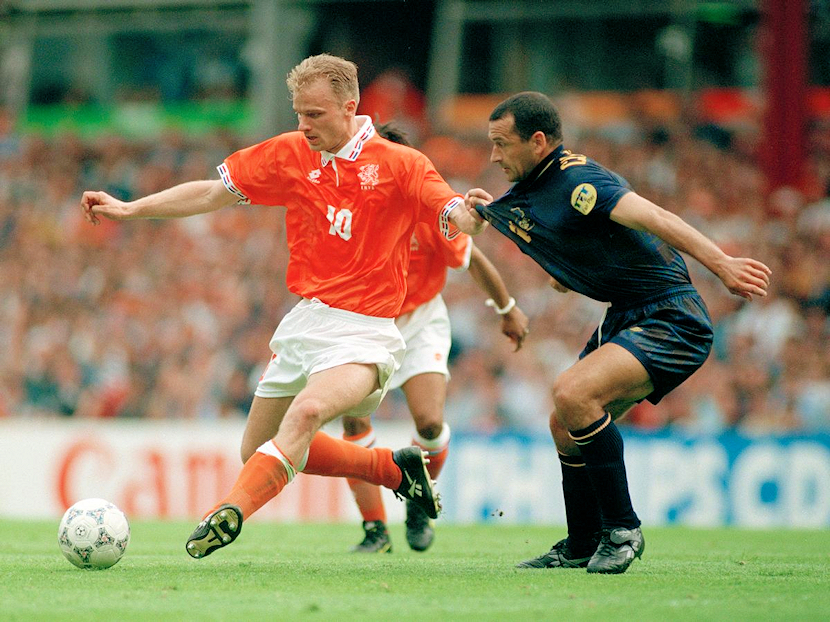 A rip roaring success that confirmed the host nation’s rehabilitation after a shameful period of violence and tragedy, or an unsatisfying affair pockmarked by average-at-best football and swathes of empty seats? Depends on your perspective I guess, but Euro ‘96 was certainly different to what had gone before.

After four tournaments with eight teams, the European Championships doubled in size in 1996, with sixteen teams competing in four groups. The dissolutions of the Soviet Union, Yugoslavia and Czechoslovakia kind of demanded that, as the ranks of UEFA nations swelled.

This was the first iteration of the competition to be officially styled as Euro + year (though text on the shirts of France, England and Scotland referred to ‘Euro 92’ four years previous) and to have a distinct tournament logo. The first nine editions shared a template logo of a flag billowing above the UEFA acronym and two digits for the year (though there was a ‘Europa 80’ secondary logo since the competition was the second to be staged in Italy).

A win was now worth three points instead if two, the ‘back-pass rule’ was introduced just after Euro 92 so first applied in a European Championships in England, and games that went to extra time could be decided by Golden Goals, a grown-up version of the ‘next goal wins’ rule to end kids games when the ball owner had been called in for tea. Shoot-outs would still decided games where no goal was scored in extra-time.

But what of the kits, eh? Let’s take a look…

Euro ‘96 was not a significant tournament for kits, truth be told, certainly in comparison to the previous two editions: In 1988 you had Holland and West Germany in templates that are cooed over to this day, and in 1992 the adidas ‘Equipment’ range heralded a sea change in kit design, and player names and front numbers were first seen.

In contrast, 1996 was a time of transition for kit design, sandwiched between the early 90s, a time of attention grabbing all-over prints, and the late 90s, when a celebration of football nostalgia led to pared-down, retro inspired looks. There was a bit of both at Euro ‘96, aggressive printing was evident on the adidas templates used for the primary shirts of Turkey and Romania, but there was noticable restraint shown with Germany’s home kit, and retro features such as grandad collars (Spain) and a lace up neck (France, home). Then of course there was tournament debutants Croatia, who’s shirts featured both bold all-over printing AND simple collar and cuff styling.

Truly zany kits were now the domain of goalkeepers.

The kit constant throughout the decade was a loose fit, though we hadn’t yet reached the billowy nadir of France ‘98.

Textures on shirts tended to be woven in rather than printed on, a notable exception was Holland who had a print of a goal celebration from USA ’94 on the shirt front. Polo collars were still popular, only Romania and Germany had no shirt with a polo collar in their kit crates.

Competition patches on the sleeves of shirts had become the norm in the English domestic leagues from 1990, and made the jump to international tournaments for the first time in 1996, though it would be another six years before they’d be used in a World Cup.

As a consequence, tournament text under or as part of crests largely fell out of favour, at Euro ’92 England, France, Germany and Scotland commemorated the tournament with text detail, but in England only France incorporated text in the part of the crest that contains the federation initials usually.

Two brands, Umbro and adidas, favoured wordmarks over logos, a carry over from USA ’94. Scotland’s home shirt still used Umbro’s double-diamond logo, though it was absent on the away.

Clashing shorts? Who cares? Seven sides at Euro ‘96 used the same set of shorts for both primary and change kits.

Nike’s first tournament kit for Italy was very smart. Its predecessor (worn against, heh, Stoke reserves in a late warm up game) had a busy looking all-over Jacquard weave that gave the impression of tonal blues, but the ‘home’ shirt for Euro ‘96 had a glossy, solid blue look. It featured a self coloured polo collar above an intriguing neckline with a triangular insert that gave the impression it was breaking open a contrast V. Gold trim broke up white on the collar, cuffs and shorts.

Coming just before the 1984 throwback they won the World Cup in, France’s 1996 primary kit gets overlooked in the polyester pantheon, but with tricolor stripes on a vertical panel and a lace up neck, it’s pretty sweet,

The adidas template that, ahem, gained fame as a Stockport third shirt was quite smart. It could have been overused had Germany needed to wear their change kit, but that wasn’t the case. Romania home and France away were the smartest versions.

Croatia’s primary shirt looked bonkers when we first saw it 24 years ago, but we’re so familiar with the ‘šahovnica’ pattern these days that the original looks classic.

Even in an era of loose fitting shirts, Portugal’s looked ill fitting, with oversized numbers in an unimpressive typeface.

Indigo blue is it? Whatever.

The navy blue sleeve and vertical stripes on the Spain home look quite regal when a player is static, but in motion the kit looks unbalanced and very dark for a team with a red shirt.

Going through a bad patch?

Denmark used heat bonded plastic tournament logos rather than sewn on patches, and because of Hummel’s chevrons, the transfers were placed high on the sleeves (PHOTO).

Whereas the Czech Republic applied tournament patches over the striping on the shirt sleeves (PHOTO), Bulgaria (who used the same shirt template) applied the patches to one side of the sleeve printing, so that they appeared on the front of the shirt only (PHOTO). They also went against the norm of Euro ’96 logo patch on the right sleeve as worn and Respect patch on the left sleeve as worn.

When Romania faced Bulgaria, Gheorghe Hagi’s shirt had the sleeve patched applied Bulgaria style (PHOTO), unlike the rest of his teammates.

Holland’s shirts were without sleeve patches against Scotland (PHOTO) and Switzerland, but present in their remaining two games. England forgot the patches when they played Holland, the first time the Dutch used them (PHOTO).

Russia had no sleeve patches when they faced Italy (PHOTO) but added them for the games against Germany and the Czech Republic.

France wore their white change kit three times, but the away shirts worn against Spain had no Euro ’96 patch, and the yellow Respect patch was applied to the opposite sleeve used in the two other games (PHOTO). This was also the case when Les Bleus wore their primary shirts against Romania (PHOTO).

England eschewed the usual red for a trim and number colour, instead going with ‘Peacock Blue’.

France’s crest was centrally placed on away shirt replicas, but not on match shirts.

Germany were the only team to use different typefaces on each of their kits.

Romania’s socks had flags on the sides against France and Bulgaria, but they were absent against Spain.

Red and white versus white and orange? That’s a bit of a clash, right?

12 teams had short numbers on the left side (as viewed) and 4 teams elected for right side application (Romania, Turkey, Spain, Portugal).

Referees wore the same style of jerseys as used in USA ’94.

Stanislav Cherchesov wore a Reebok goalkeeper jersey in Russia’s first game against Czech Republic, but when he was replaced for the Germany game, Dmitri Kharine wore a jersey that at first look has no supplier branding, but a closer inspection reveals a discreet Reebok ‘vector’ logo on the collar, there’s no competition sleeve patches though.