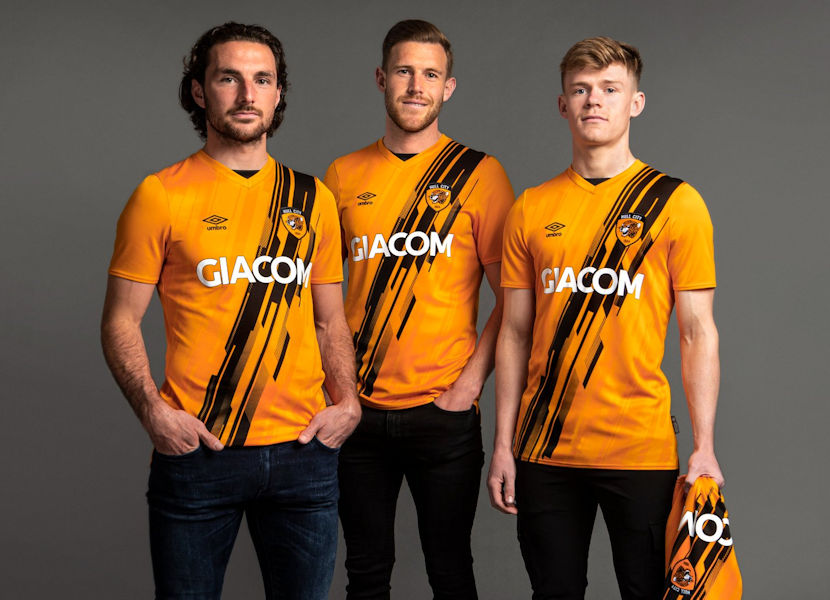 Historically we’ve noted our ‘first impressions’ soon after a kit launch, but in this age of shirt focused releases, with skinny jeans clad players modelling new shirts as ‘athleisure-wear’, we’ve elected to wait until the new home was worn a few times in match action before offering more considered thoughts…

@SombreEthyl: “I find myself conflicted about the 2021/22 primary shirt, in that… as a garment, I quite like it, but as part of a home kit I find it disappointing.

If this was a training shirt, I’d argue that it’s the best training shirt we’ve ever had, and that comes after two successive training shirts/pre-game jerseys from Umbro that I’ve liked enough to buy.

The abstracted sash pattern underneath the club crest, let’s call it a ‘glitch-sash’, rides the continuing trend of bold prints on shirts and looks both smart and contemporary. It’s complemented by a diagonal tonal amber pattern, which is a good change of pace: we’ve not seen anything but a solid amber on a home shirt since 2001/02, when the ribbed weave created the look of lighter amber pinstripes.

However, aside from a once-a-generation dalliance with tiger prints, I like my home shirts to be vertically striped. It’s something City have done very well throughout the current deal with Umbro which started in 2014, five out of the eight home shirts have been in the traditional club style, and last season’s captured the archetypal Hull City look perfectly. The 2020/21 primary shirt ranks alongside the early-1963/64, 1980-82, 1990-92, 2006/07 and 2008/09 editions as an answer to the question “what does a typical Hull City kit look like?”

While I do acknowledge that coming up with a fresh looking striped shirt in the yearly kit-cycle era is challenging, it’s something that Umbro have demonstrably excelled at, and I’d have liked that to have continued in 2021/22. What compounds this feeling for me is the nagging question of “what would this design look like as part of a change or third kit?”

I’ve long been a proponent of a contrast sash change kit, and can you imagine how good the glitch-sash would look if amber on a field of all-black? Or amber on all-white? **drools** 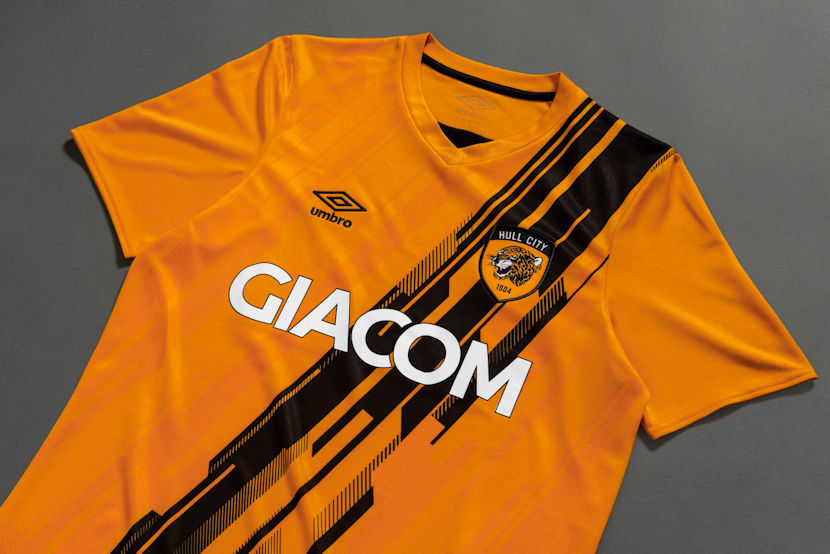 But, that’s not to be, and I feel I should re-iterate that I do like this shirt. Putting a thin black outline on the white Giacom sponsor was a smart move, it improves legibility and feels visually correct (some of us are still psychologically scarred from the sponsor patches that aesthetically killed the otherwise decent 2012/13 home shirts). The small black inset panel on the neckline? Yep, that works, without it a purely self-coloured, mitred V neck would have been drab and unremarkable.

On the player kits, the logo of back of shirt sponsor ‘On Line Group’ has been updated. Previously the firm’s full name sat alongside a 3D box formed out of stylised arrows graphic, whereas now overlapping company initials are applied in white underneath the player numbers. It feels aesthetically neutral, neither a positive or negative change, but from a branding perspective I’m not sure the firm have done themselves any favours, and the company website is still replete with the 3D box logos after all, but that’s on them.

East Riding College are again back of shorts sponsors, their logo is unchanged and isn’t aesthetically intrusive on simple black shorts with small amber stripes on each side that are obliquely truncated.

Completing the kit are amber socks decorated by a hefty, cut off black triangle on the back of the turnover cuff, which from the front gives the appearance of small black triangles on each side of each sock.”

Verdict: – Pretty good, but the away and third kits might be doing the heavy lifting for the 2021/22 kitset. I liked the all-amber look seen at Preston more than the regular amber-black-amber configuration. 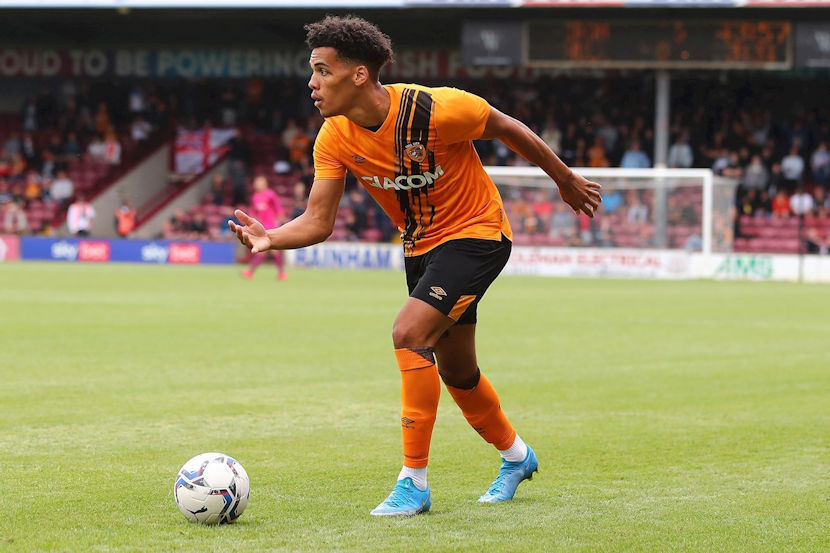 @MikeyCarter90: “The season after releasing a shirt with black and amber stripes, it was always likely that City would opt for an alternative design to their primary shirt and that is exactly what we’ve got.

Commercialism usually lends its hand to clubs trying different looks on home shirts. The colours rarely waver on home shirts but the design is open for change and it usually does.

The sash look isn’t a look that I’m against, but I am not feeling the glitch look to the sash. I think going with a solid black sash would have looked better and appealed to me more. I didn’t like the idea of having an extra piece of black fabric at the V of the neck, but having seen the shirt in person now, I don’t mind that so much.

Les (@SombreEthyl) Tweeted about the impact of set-in sleeves have on a shirt and he’s so right. The fit on the Raglan sleeved goalkeeper jersey is better both in terms of fit and looks. The home shirt with set-in sleeves nips up on both shoulders, leaving a less than desirable look.

I do understand the demographic that clubs have to appeal to when designing a shirt, is probably wider than any other around so appealing to everyone is nigh on impossible. If the club can attract the attention of each supporter with at least one of the three shirts they’re on to winner in my eyes.

To summarise, the home shirt isn’t one that I will be rushing out to purchase at full retail price as it just doesn’t appeal to me. However it has been excellent to see how many supporters have purchased and worn these to games since the release.”