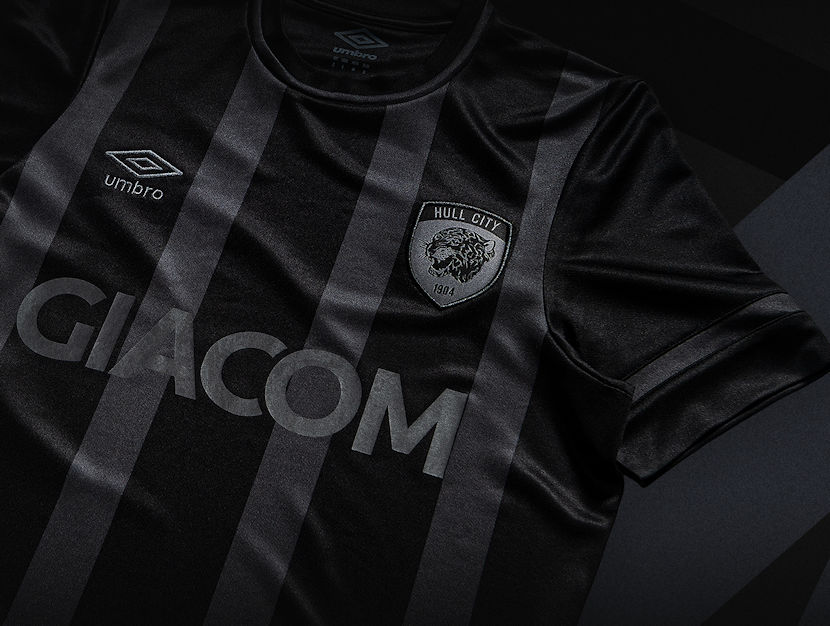 ‘STEALTH’ was the single word used to market the 2021/22 away kit upon it’s release, but far from going undetected on the radar of kit enthusiasts, it has been noticed like no other non-tigerprint Hull City shirt. Here’s our considered thoughts…

@SombreEthyl: Blackout kits eh? Aren’t they just for clubs beloved by hipsters from Stockholm (AIK) or the Prussian side of the ‘Weißwurstäquator’ (such as the Borussias Dortmund and Mönchengladbach)?

Not any more it seems, as Hull City have waded in with their own iteration of a monochrome aesthetic, and the result is quite wonderful.

It’s not often a Hull City shirt holds appeal for anyone beyond East Yorkshire, and when it does happen it tends to be related to the use of an animal print, and let’s face it you can only do that every so often before it becomes pastiche.

Yet this shirt appears to have penetrated the consciousness of kitgeeks everywhere, and received universal acclaim, which might explain why the shirt sold out before stock could reach the Tiger Leisure club shop, leaving some City fans unimpressed that they might not get their hands on one until October.

It’s perhaps a little surprising that City have gone with two dark away kits consecutively, the Tigers have alternated between all-white (2015/16, 2017/18, 2019/20) and all-black (2014/15, 2016/17, 2018/19) in recent years, though last season’s slightly broke the mould with a carbon grey shirt body contained by Raglan sleeves, shorts and socks in black. Still, it was a surprise to see another dark away kit, and they don’t get much darker than this.

Pleasingly, there are no half measures with this blackout kit, whereas Germany’s Euro 2020 shirt featured red and gold bands on the cuffs (to form the colours of the flag) and Mönchengladbach’s had a white band on both the collar and cuff. The only contrast on this shirt is tonal, with thin stripes, collar and cuff trim, the crest, maker mark and sponsor all in black.

I’m gratified that the shirt features vertical stripes since they’re absent on the home shirt this season, they’re a key part of our visual identity. The whole aesthetic of this kit would have been destroyed had sponsor Giacom not been on-board, but thankfully they get it, unlike former Coca-Cola marketing VP Ricardo Fort, who was critical on LinkedIn… 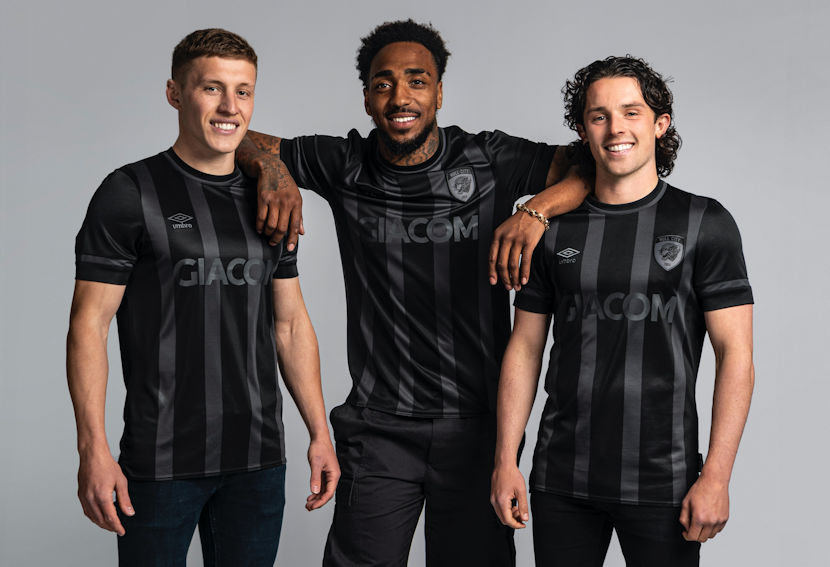 “”What if we print our logo in the exact same colour as the shirt?”, said no sponsor ever in the history of football. Don’t get me wrong: the new Hull City shirt is a work of art and I would love to have one. But… it is a disservice to their sponsor. Front-of-shirt sponsorships exist primarily because they provide high visibility for brands looking for building awareness. No design (even this great-looking one) should be put ahead of the functionality of promoting the sponsor. After all, who do you think is paying for the athletes wearing this uniform? Next time you negotiate a front-of-shirt sponsorship, make sure you add language on your contract that the shirt must have contrast with the colours of your logo.”

Fort spectacularly misses the point several times. People expect a sponsor on a shirt, such adverts on shirts have become ‘wallpaper’ (as aptly described by Umbro UK’s Jonathan McCourt), so when a shirt is all black they ‘lean in’, they pay extra attention to detail that isn’t immediately obvious. Fort is seemingly oblivious to the fact that he, a Brazilian based in the United States, is promoting Hessle-based Giacom by spending time on LinkedIn moaning about a shirt that he claims stiffs the sponsor somehow.

You know what would have happened if Giacom had insisted their mark was in a hi-vis contrast tone? They’d have been panned for it*, for putting their own identity over the aesthetic of the kit, which will only be worn a handful of times relative to the primary kit which does have a highly visible sponsor mark on it. Instead, Giacom have been roundly praised for playing their part in one of the most talked about Hull City shirts ever, and what’s more seem to understand that using the shirt as a billboard is just one element of club sponsorship.

*a good example of this is Nike keeping their Swoosh on the otherwise historically accurate recreations of 1917 baseball uniforms worn in the MLB’s inaugural ‘Field of Dreams’ game. Nike have the brand strength to laugh off such criticism, but does a young, local brand taking it’s first steps into pro sports sponsorship?

Fort evidently believes a kit’s primary function is to be an advertising space rather than to distinguish two sides in a football game, and that shirt advertisers alone pay footballer salaries, rather than a coalition of parties such as broadcasters and the football fans who pay for their subscriptions and match tickets. The man can get in the sea.

Still, he gave Giacom CEO Mike Wardell the opportunity to eloquently respond: “Being the principal sponsor of a club is more than just a logo on the away kit, it is a true partnership (in this case with our local club). Joe Clutterbrook and the Hull City team worked with us collaboratively and gave us the option with the branding, but we felt it was more important to keep the authenticity of the kit and hoped it would create something iconic for the fans to be proud of.”

Wardell’s hopes have become reality I feel, this is an iconic shirt, and not just an iconic Hull City shirt, but an iconic football shirt that appeals to non-Hull City fans. That’s rare. Get one if you can. 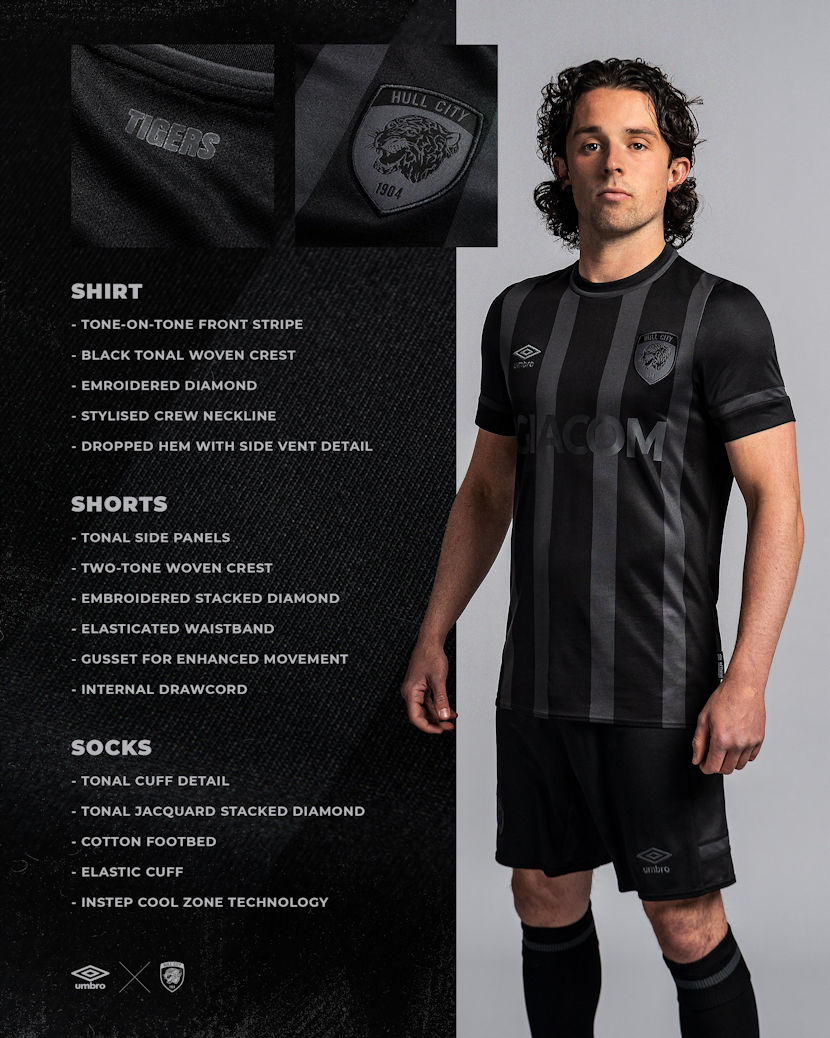 @MikeyCarter90: There has been lots of praise and adulation across social media for the 2021/22 Hull City away shirt, and rightly so! The Tigers have opted for a black-out look on the road and early signs, and sales, point to this being a sensational decision.

It’s a great sign of the relationship between Hull City and sponsor Giacom that they’ve allowed their wordmark to appear in a way that isn’t necessarily to their benefit. Kudos to those guys as without them, the vision for the 2020/21 away shirt wouldn’t be possible.

You’ll notice I’ve used the word shirt a few times and that is intentional. I’m not sure that this shirt will have the same effect as a kit. When patched up with sleeve sponsors, back of shirt sponsor and player name and number the shirt could become messy. Until we see this we won’t know, but I do cringe just thinking about it.

It feels like this shirt has attained a cult following outside of Hull City supporters too. Some will love that and others will hate it but it will certainly work as a brilliant marketing tool for the Club.

The pre-order situation has found itself escalating into a fiasco and that’s disappointing to see but hopefully, we’ll get our hands on this shirt before too long. I for one cannot wait!