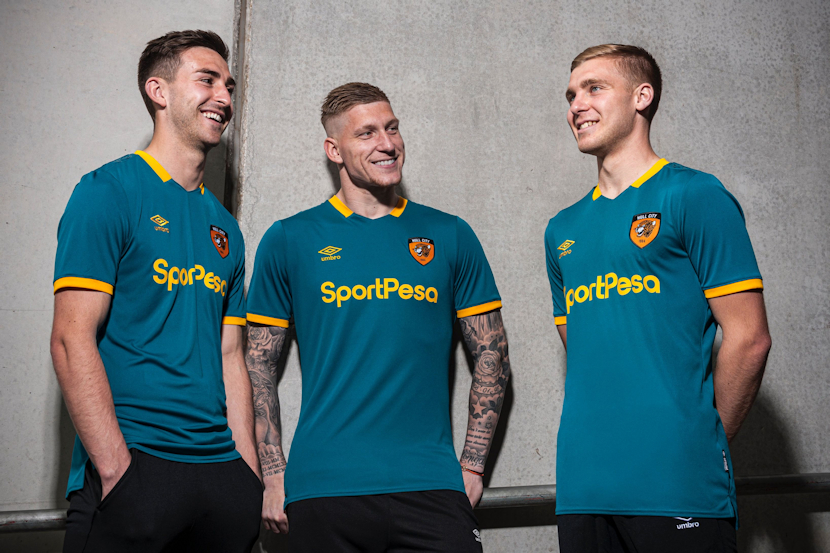 The new Umbro third kit was released on Tuesday 13th August, and said to be a homage to the ‘iconic colours of Boothferry Park’, a tagline that had us scratching our heads for a little while. The HCK Kitgeeks are here to ponder the deep meaning of the ‘Deep Lagoon’ colourway…

SombreEthyl: There was an interesting piece on The Guardian’s Sportblog recently, (Modern football kits are stretching credibility – they’re not worth the ballyhoo), and in it, Simon Burnton made clear his disdain for ‘credibility-testing explanations’ in kit launch text.

I chortled in recognition when he rightfully ridiculed Puma’s assertion that the new Manchester City third kit is yellow and peach to “embody the modernity of the club and its mission to play attractive, technically skilled and attacking football”, but it was the line “Gone, it seems, are the days when it was enough for a new kit to look good, or just a bit different.” that got me thinking.

Sure, we want a kit to look good, but we also want some thought put into it right? No matter how lovely the colour of a new third shirt is, you’d rather know that there was some club themed inspiration behind it than to think someone threw a dart at the Pantone Colour Institute’s latest brochure and therefore ‘Terrarium Moss’ it is.

As if to demonstrate the point, Umbro have released the 2019/20 third kit with a limited explanation of why the main colour is Pantone 19-4540 TCX…

‘Iconic colours of Boothferry Park’ said Umbro UK’s Tweet, posted just after 9am, accompanied by an image of a brooding Jordi de Wijs hanging out in one of the KCOM Stadium’s access tunnels wearing a smart looking shirt that was largely teal.

The Club’s official website gave away a little more: “The bespoke design pays homage to the iconic colours of sections of our former home, Boothferry Park – with the dug-outs and seats housing similar colours to what features on this contemporary third kit.”

Now I don’t recall seeing teal tones on dug-outs and seats in my near twenty years of attending Boothferry Park, but there was something familiar about it, and after a bit of brain racking I remembered the wooden hut at the back of the South Stand which sold tickets to the seating section of ‘Bunkers Hill’. 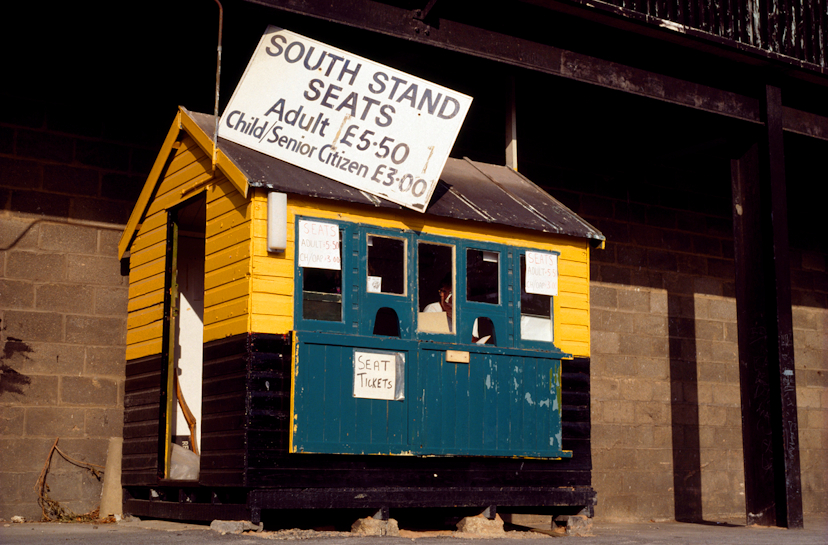 Though the hut was mostly painted amber and black, when the panel that covered the customer service windows on non-matchdays was dropped down, it revealed teal sections, perhaps the shed’s original colour.

Could the shed be considered iconic? Yes, because it was photographed and exhibited by Stuart Roy Clarke in his wonderful ‘Homes of Football’ collection, which was displayed at the National Football Museum in Manchester, the base of Umbro.

I frankly love this. I passed that hut every home game for years, never using it as I preferred the terrace steps of the South Stand, and when it reopened, Kempton. Using that as inspiration is all good with me, even if it did take me a while to make the connection.

As has become the norm this season, only the shirts were revealed, modelled in various poses by Reece Burke, Dan Batty, Robbie McKenzie and the aforementioned de Wijs.

The shirt has a simple V neckline that is complemented by amber panel that gives the illusion of a thin polo collar from distance. The amber is replicated on the sleeve cuffs and is a lighter shade of amber than what appears on the club crest, suggesting that tone has been extrapolated from the ticket hut photograph too.

There’s no need for a print or pattern woven into the fabric as we have on the primary and change shirts, the deep teal with amber trim is all this shirt needs. The ‘Deep Lagoon’ tone is lovely, a hybrid of blue and green that feels assertive and sophisticated.

We’ve not yet seen the accompanying shorts which are, according to the club’s site piece, rendered in ‘Medieval blue’, a tone akin to navy, and the socks will be a combination of that navy and ‘Deep Lagoon’.

Could the crest have been rendered in two-tone to fit in a little better? Perhaps, but it’s not an issue for me. I think Umbro have given us another lovely kit, and a really strong kitset for 2019/20.

I said I wanted a typically 90s tone and teal is pretty much THE colour of that decade, evidenced by its use by several sports teams in the 1990s, such as the Jacksonville Jaguars of the NFL, the Vancouver Grizzlies of the NBA and the San Jose Sharks of the NHL. The Deep Lagoon tone feels both retro and contemporary.

While I’m in broad agreement with Simon Burnton that some kit launch blurb is eye-rollingly corny, and I feel not every kit needs a narrative, I do appreciate knowing that thought and effort has gone into our third kit, we’ve not just been assigned an on-trend colour on a whim, there is a link to Hull City here. Keep your modernity signalling peach Manchester City, we’re fully immersed in ‘Deep Lagoon’. 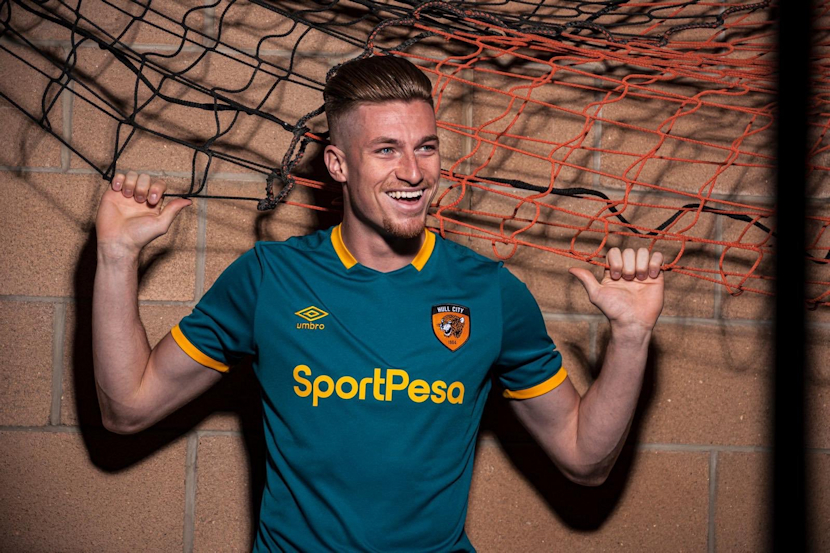 @MikeCarterHKR: Umbro have revealed our third and final shirt for the 2019/20 season.

My initial thoughts? Yowie Wowie! This is absolutely wonderful!

You’d be forgiven for not getting the throwback to Boothferry Park, but it’s nice to have a shirt linked to our former home, after Umbro confirmed it’s based on the old South Stand ticket hut through emojis. It’s not something that I remember but I’m sure others will have fond memories.

I find it really interesting when clubs have a shirt which has a connection (to the club) or a story behind it. This fits that bill nicely.

I love the colour combination of teal and amber. They’re not two colours that I would have put together but they work so well. Once again Umbro and Sportpesa have colour coordinated their branding to add an easy on the eye finish. This is something which has become the norm, but complimenting it shouldn’t ever stop. Not every brand or manufacturer would do this like Umbro and Sportpesa.

We have the smallest amount of taping on the shoulder, but it’s enough to put a smile on my face. I asked, and Umbro delivered! (Yeah this had nothing to do with me).

The neckline on the third shirt is my favourite of the three we have this season. The fact it doesn’t flow all the way around doesn’t bother me, which does surprise me considering my quasi-OCD behaviours for things being complete, as it does come to an unnatural stop half way around the front. It could also be the closest we get to a polo collar, as it looks like one from the distance.

The neck and trim both have an amber finish, the usual nod to our primary shirt colour which once again adds a nice finish.

I’m intrigued to know which colour name and number set we’ll use. I would assume it would be white but how good would it look in amber if the EFL make one.

Umbro have delivered well on the whole once again this season, after seeing it in action the away is growing on me and the home beautiful. This third shirt completes the trifecta of shirts but it saddens me that we’ll have to wait almost 12 months to see what else Umbro has up their sleeve for Hull City. It’s certainly going to be tough to improve on in 2020/21, but I’m excited to see them try. 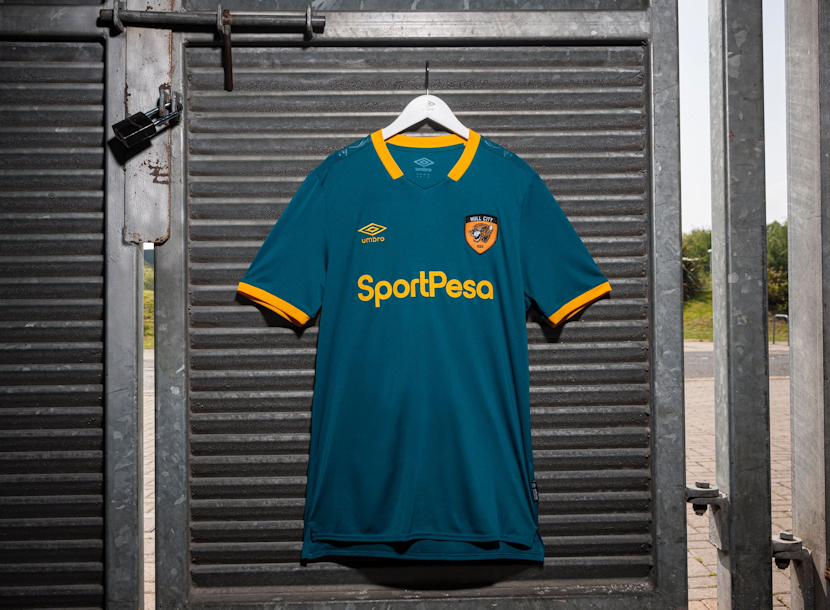 That we will only wear this a few times this season! Well, I said I wanted a green third choice shirt and teal is close enough, the throwback to the South Stand ticket shed colours is an amazing touch by Umbro , surely any fan must applaud that reasoning even if the shirt isn’t their cup of tea. Knowing we have a supplier that considers our club history and gives us kits that can be called Hull City kits and not just a recoloured template is just phenomenal.

Double-diamond taping on the shoulders is an element I have absolutely loved on the shirts for the last few years, so I’m glad it is back in some form here, and that makes the third shirt unique this season. I’ve said when discussing both the home and away shirts for this season shirts that the Sportpesa wordmark changing font and more importantly colour to complement the shirt has been a massive bonus and it’s a great touch again, making it the same as the trim and supplier logo gives the shirt an integrated, uniform look, I’d like to have seen the crest have a change to match, but isn’t that big a loss.

The Kitcast by Hull City Kits – episode 9
Scroll to top