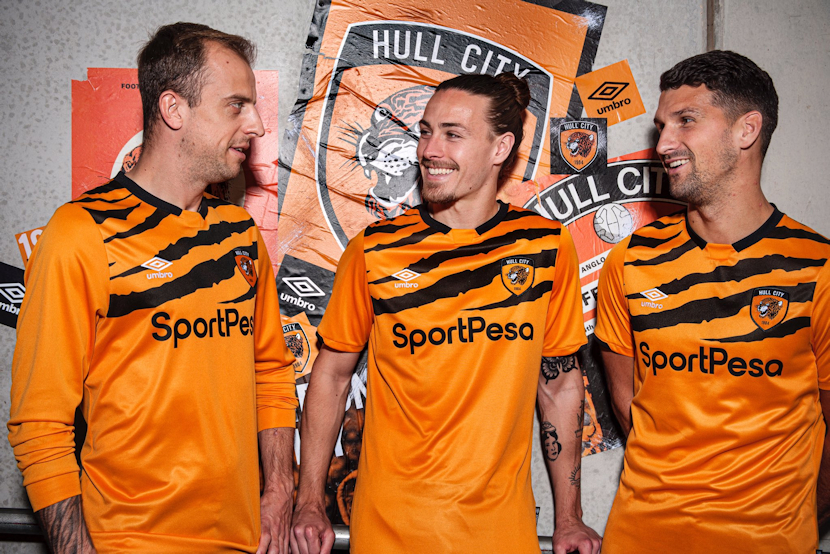 Umbro caught everyone by surprise on Friday when they released a primary shirt that riffs on the infamous 1992/93 tiger stripe home. So what do the HCK Kitgeeks make of it?

Well, it had to happen at some point. In the 27 years since the 1992 Matchwinner home shirt seared itself onto the footballing collective consciousness, it’s gone from ridicule to really cool. Once it topped every ‘worst kit ever’ list, but in the last few years the price of Matchwinner replicas on auction sites has rocketed and there has been a growing clamour to again have tiger stripes on a City shirt. It had become inevitable that a new shirt would reference the original sooner or later.

For my part, I wasn’t keen on revisiting the 1990s. Sure, I love the retro kitsch of the original, but felt that kind of lurid, all over print, belonged in the past. I was OK with using it as a warm up shirt design, but I feel such a tight pattern isn’t really appropriate for a match shirt. The purpose of a match shirt is to clearly distinguish a team from the opponent, to stand out, whereas a tiger’s stripes are a natural camouflage, they help a predator blend in to the background as it stalks prey. On a vertically striped shirt the amber stripes pop, they are easy to pick out, but the tight pattern of tiger stripes blurs together the black and the amber, from a distance the amber is hard to make out.

Umbro have recognised that, and in doing so have changed my mind about having a shirt with tiger stripes to an extent, because this is really good.

Their decision to have just a band of tiger stripes on the upper chest, and to have those stripes clearly defined and spaced out on a field of amber, is brilliant, and what makes this shirt work on every level. There should be no issue of ‘camouflaging’ here, it meets the basic match shirt requirement of distinctiveness in a way the 1992 shirt did not.

I like that the tiger stripe pattern on the shirts is uniform, it looks the same on every shirt, because a football shirt IS a uniform, the asymmetrical striping on the 1992/93 shirts was not a good thing. I’m OK with the stripes ending at the set in sleeves, and although I don’t love the collar, the inset trapezoid panel seems a bit unnecessary, I don’t mind it either.

My preference would have been for a small, black polo collar, but I suspect the window of such collars being used, such as on Manchester United 2013/14, France 2014 and Manchester City 2015/16 primary shirts, has been closed. (There’s a good article about this here… ‘The sunset of polo collar in football fashion’) 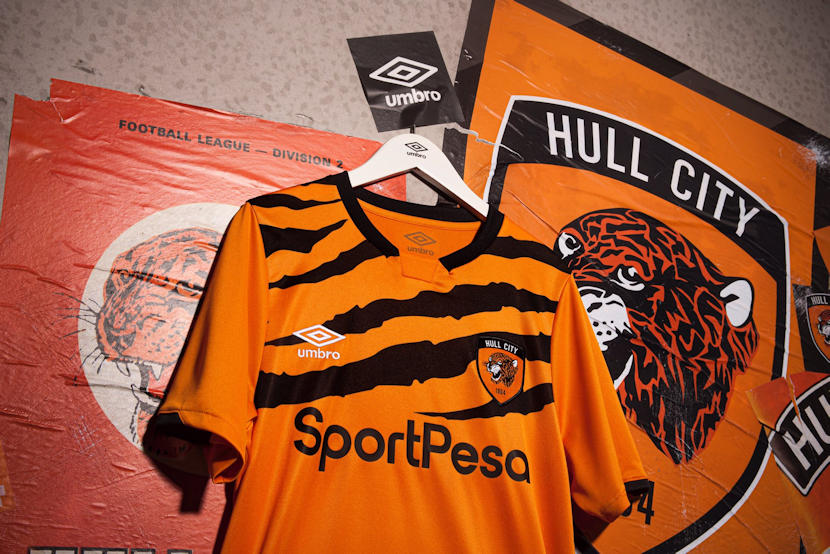 As much as having tiger stripes can be so, this is a really tasteful way of referencing both the club nickname and the 1992 home shirt, there’s nothing gaudy about it, and in contrast to the original, it doesn’t feel like a novelty affair. The sympathetic treatment of the sponsor wordmark is worthy of praise too.

The shirt has looked an orange tone in launch photographs, but I wonder if that’s just some over zealous Photoshop colour saturation, I’m hoping so.

It’s fascinating that very little has been made of the shorts and socks, the launch has been all about the shirt. We haven’t yet seen the 2019/20 home ‘kit’. There was an image of the black shorts and another of the amber socks, both seem simple affairs with minimal trim.

I believe Umbro have created a modern classic here. They’ve taken an iconic shirt as inspiration and given it a fresh, modern look that isn’t gaudy and anachronistic in the slightest. I was against a rehash of the 1992 shirt, but I’m not against this, it’s excellent.

We need to talk about the crest aesthetics though… Since it’s release and the seemingly rapturous response to it, something has gnawed away at me but I’ve left it unsaid. We’re all delighted to have the name back on the crest, but I think that delight is making people willing to overlook what’s happened to the tiger.

The great job Umbro have done in spacing the tiger stripes out, so that from afar it’s not a blurry mess is juxtaposed by what the club have done ‘updating’ the tiger head, which is now a blurry mess.

The stripes of the 1970s tiger head needed cleaning up, more definition, and what we have is less. A real tiger does not look like the creature on the new crest, and what the hell happened to the chin? It’s just been shaved off.

Now this can be easily fixed, we don’t need a new crest, it doesn’t need a total overhaul, it just needs looking at again. 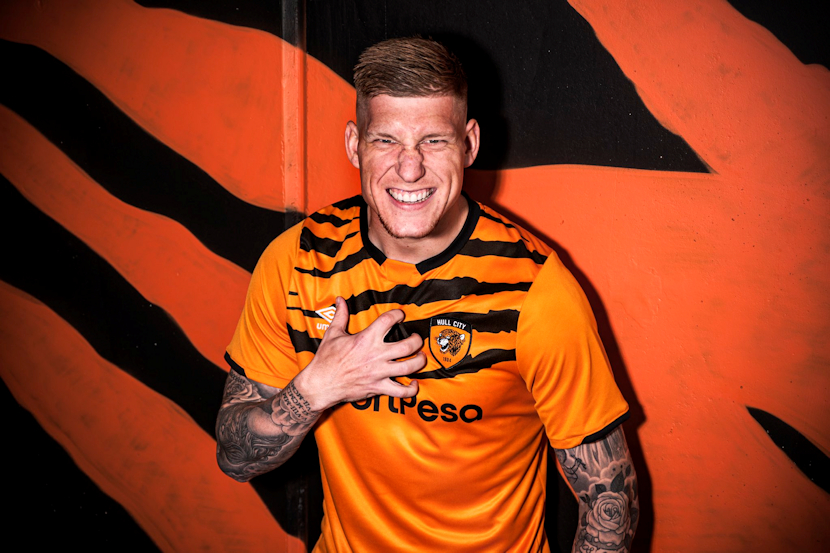 @Adz238:  So it’s here… the 19/20 home shirt, and I’m loving the throwback tiger print at the top of the shirt. Umbro have managed to do it with a lot of class and not make it to ‘in your face’.

I’m slightly disappointed that there’s no Umbro branding on the sleeves this season, I really liked the double diamond taping that’s been on the shoulders or sleeve cuffs the last two seasons.

I’m happy that Umbro is white to make it stand out from the rest and that SportPesa has stayed with the theme to keep a bit more black on the shirt, the way the badge goes in to a stripe makes the name on the badge pop out too. 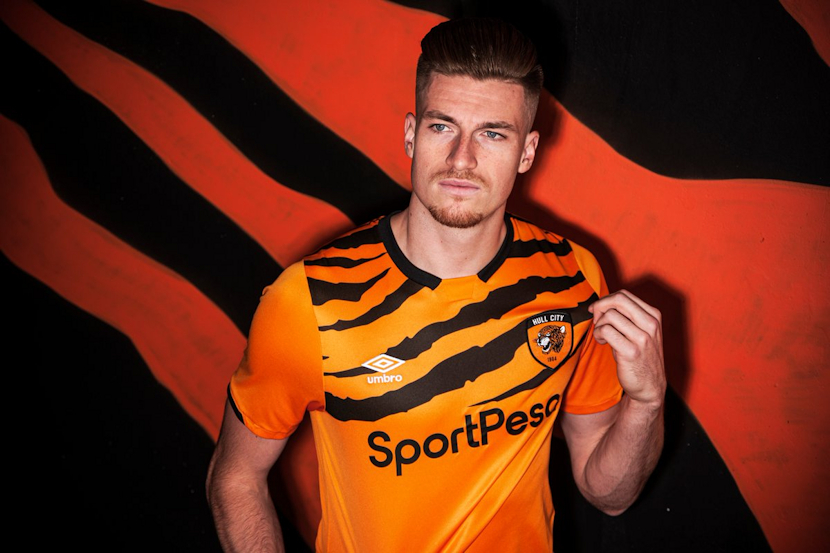 @MikeCarterHKR: When I am asked the question “who makes the best football shirts?” I always reply Umbro.

The new shirt is a clear throwback to our Matchwinner shirt from the early 90s. The stripes across the chest are just enough for me, they’ve been smart and logical with the placement, clearly showing club and sponsor branding. Umbro and Sportpesa have again colour coordinated their branding to give the shirt that finishing touch.

I would have liked to have seen what the shirt would have looked like if the stripes had extended to the sleeves too though, and the lack of Umbro taping disappoints me, but I feel I can bypass those feelings by hoping we’ll get some on the away or third shirt.

Our 2019/20 home shirt is the first to feature the new club crest, which sees the return of the club name to our shirt for the first time since 2013/14. The crest is again, presented in a parquet style on the shirt and I love this application.

I am happy that we haven’t gone down the route of stripes, pin stripes or twin stripes this season even though that is against our brand image. I feel clubs need to make changes every once in awhile to keep things fresh. I can see this shirt being a bigger seller for the club and I hope the reintroduction of the name, and the new club crest makes this shirt a must buy for all Hull City fans. 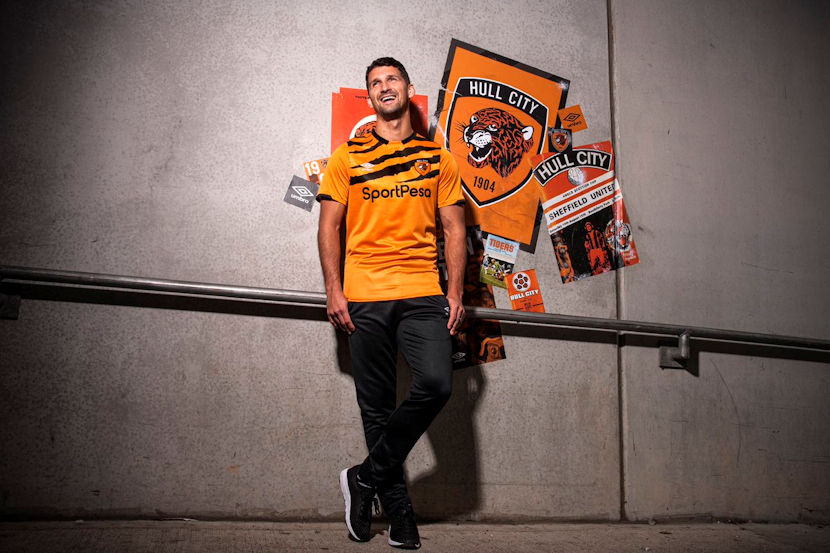 The Kitcast by Hull City Kits – Episode 7
Scroll to top