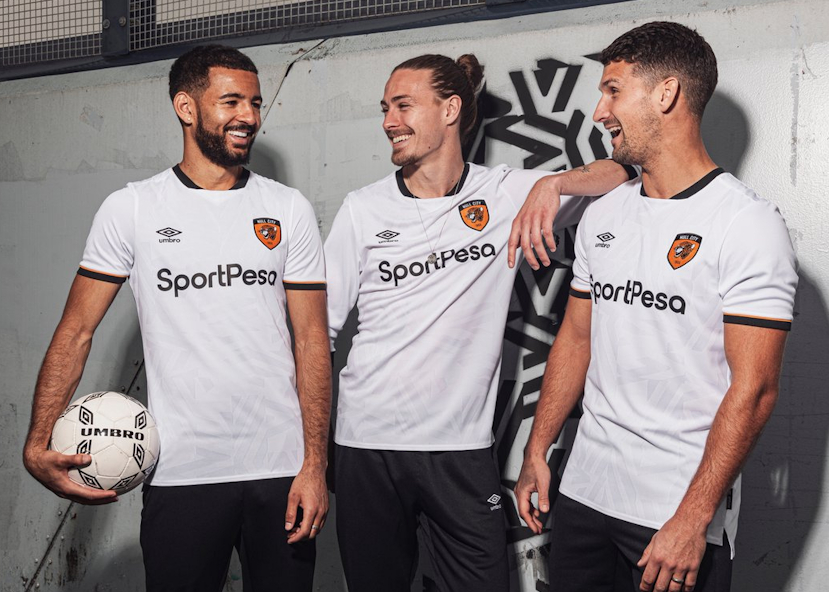 It’s gonna be all-white! City’s new Umbro change kit that is, though we only saw the shirt in launch images on Tuesday.  The HCK Kitgeeks have had time to beard-stroke and form opinions, so what do they make of it?

SombreEthyl: Like a sash wearing ambassador serving Ferrero Rocher to his guests, Umbro are really spoiling us Tiger Nationals, and they’ve nailed it again with the 2019/20 away shirt.

City, in partnership with the double diamond brand, continue to channel the summer of 1992:  contrasting a garish but fun animal print home shirt with a restrained yet sexy, not to mention traditional, white change shirt featuring a Jacquard weave that elevates it beyond the ordinary. You’re not going to top the attention grabbing home shirt, and Umbro have been sensible to not try, instead offering up a minimalist alternative to a ‘challenging’ primary shirt, not everyone can pull off the tiger stripe look after all.

As a traditionalist, you’re halfway towards pleasing me with an away shirt if it’s white, that’s what I instinctively expect City to be wearing if they’re not able to wear amber and black. I accept that you can’t do that year on year in the one-year kit cycle era, so I like that City have established a rotation of all-white (2015/16, 2017/18 and now 2019/20) and all-black change kits (2014/15, 2016/17 and 2018/19) while with Umbro, keeping to the club’s palette for the first two dress options and using the tertiary kit for experimentation..

The details then…  I quite like the neck style, I certainly prefer this inverted triangle inset panel to the odd trapezoid of the home shirt, in fact I wish this collar was on the home shirt too to make it look part of a set, much as Matchwinner’s obliquely cut placket and sleeve arch did in 1992/93. The self-coloured crew necks on the Everton home and Derby County away shirts give them a training shirt look to my sensibilities, that isn’t the case here and it’s because of the contrast black and styling of the collar… 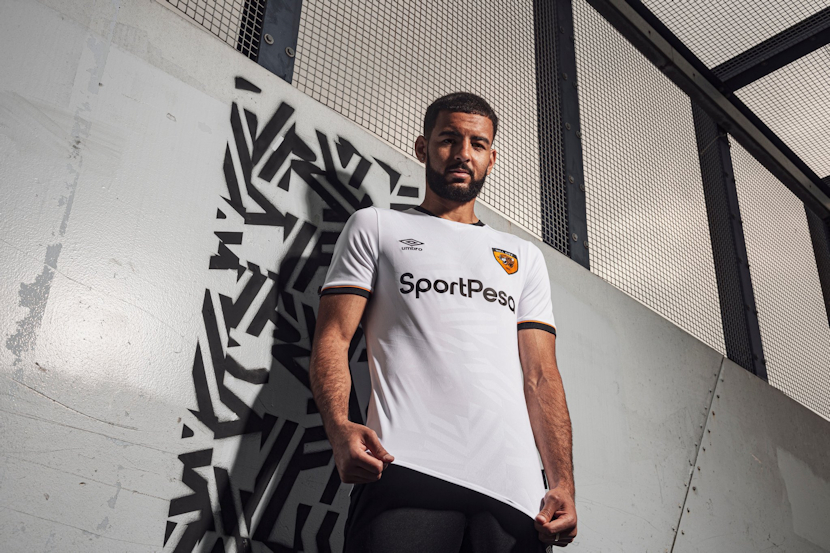 The amber piping separating the set in sleeves from the thin black cuffs on the short sleeved shirts is the only flash of amber aside from that on the crest, but that is absent on the long sleeved version which has just a thicker black cuff. It’s no dealbreaker, but I would like to have had the amber piping on the neck too, lest anyone of a Rugby League persuasion note that the shirt is black and white, like that of our co-tenants at the KCOM Stadium. The choice of having only a sliver of amber trim does make the crest stand out though, maybe that’s a conscious decision since the crest is new.

SportPesa have an updated version of their wordmark on the new season’s kits and it suits being on the chest of a shirt much better than previous iterations, this is a clean and classy looking sans-serif font with no outline, rendered in black, and it complements the shirt well. The shirt blighting vinyl patch on the 2011/12 home is still fresh enough in the memory to ensure that a carefully considered shirt advertisement is noted and praised.

The most striking feature is the Jacquard weave pattern of ‘shattered diamonds’, a motif that shows up on other Umbro jerseys this year, such as the Derby County and 1. FC Nürnberg aways. I think this feature really enhances the shirt, without it there’d be a functional change shirt but little to get excited about. I’m a big fan of Umbro as a brand, they have real heritage and authenticity, and since we regrettably missed out on double diamond kit in their mid 1980s to mid 1990s pomp*, I love seeing Umbro legacy references such as this Jacquard weave.

Only the shirt was shown in the launch images, and it was paired with black track pants, so it’s hard to get a feel for what the full kit will look like, but I like the shirt a lot. I think its understated nature is a strength, not a flaw, and I reject the notion seen a few times on Twitter that we should have replicated the yoke full of tigers stripes from the home on the away. Let’s face it, that wouldn’t make you think ‘Oh, a Siberian Tiger’, you’d think ‘that’s Zebra-esque’. No, the job Umbro have done show’s good taste.

As a guest at the Ambassador’s reception proclaimed… “ECCELENTE!”

*The Museum of Jerseys website encouraged us to daydream about 1980s Umbro Hull City kits, even rendering them as part of the ‘Fantasy Kit Friday’ feature. You can see the classic Umbro templates we went for at http://hullcitykits.co.uk/fantasy-kit-friday-umbro-80s/ 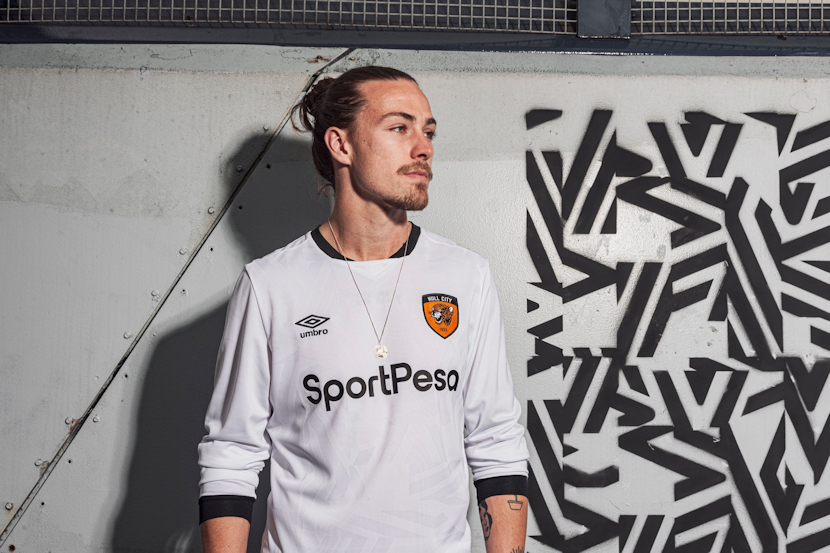 Fresh, clean and a little different despite white being a familiar change tone for City. We seem to go white/black/white/black these days with the away kit, and I’m not gonna lie, I love a white away kit.

The weave of broken double diamonds in the main shirt body is absolutely amazing but unlike the Derby shirt that looks a little like a training shirt, this really does look good as a match shirt. The amber piping on the sleeves is a great touch, and SportPesa’s new font works really well because of its simplicity. The black text ties with the neck line, cuffs and manufacturer logo.

Now on to that neck line… I’m not a massive fan of it – it’s the only part I’d change, maybe to make it join up in black would have been a better look.

All in all though Umbro have once again given us a belter of a kit, and it’s very fitting that we have a white away shirt to contrast a tiger print home as we did in the early Nineties. A solid 9/10 from me, Umbro take a bow!

Now let’s keep our fingers crossed for another throwback and have a green third kit. 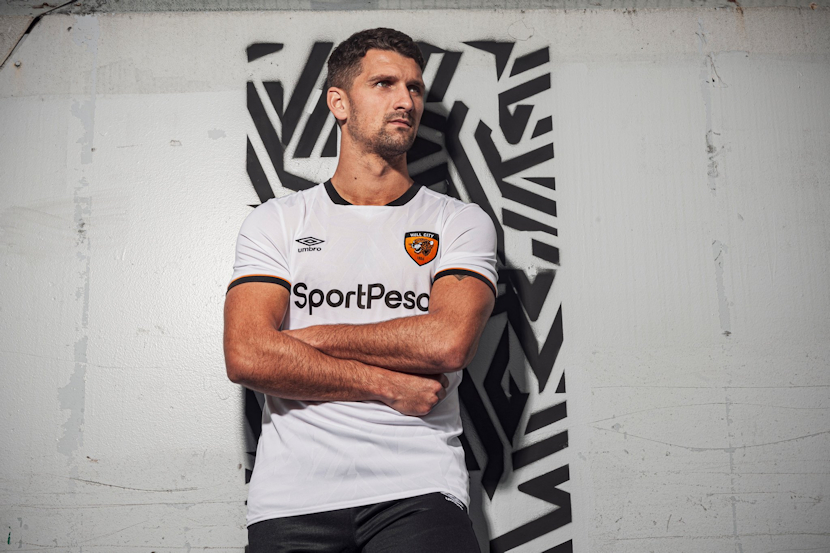 @MikeCarterHKR: As Hull City fans we’re accustomed to having a white alternative shirt, and many of them have been absolutely beautiful, and I think Umbro are doing a great job with kits for Hull City. Unfortunately this one is not among the greatest in my opinion, though I suspect my fellow kit geeks will receive it well.

The shirt features a shattered double diamond Jacquard weave, which you’d be forgiven for not spotting straight away, it’s not obvious on all of the release pictures. This weave appears on a number of new Umbro shirts, it’s a recurring theme in 2019/20, and I can appreciate how it creates a little bit of character for the shirt and ties in very well with the brand, but I wouldn’t be disappointed if it wasn’t there. This is probably the shirt’s most notable feature, so since it doesn’t do anything for me that’s probably why I’m not in love with this shirt.

The sleeve edging is sleek on the short sleeved shirts, thin amber piping meets the black sleeve cuffs and looks a much nicer finish than that on the 2015/16 away shirt, which had alternated colours. I miss the Umbro sleeve taping of the last few years and some Umbro shirts this year, such as Burnley home and Bournemouth third, do have some double diamond imagery on the sleeves, but I do love the simplicity of the cuffs here.

I’m not a fan of the trapezium insert on the neck of the primary shirt and hoped it wasn’t going to be on all of our 2019/20 shirts as it feels over-complicated and cumbersome. To keep the theme of using shape nomenclature going, we have a white isosceles triangle on the away shirt underneath a solid black neckline. I don’t hate this, but I would have quite liked a discreet polo collar, which would have been an additional nod to the 1992/93 change shirt.

As on the home shirt, the SportPesa wordmark is rendered in black. Not all sponsors would be as accommodating as SportPesa have been with City so for that they deserve a tip of the hat, year on year their their branding has looked better on our shirts.

To summarise, this shirt would probably be included in a conversation of best white Hull City away shirts, well if I wasn’t in the discussion! It’s a simple shirt and given the edginess of the home that’s probably what was needed. It gives those who aren’t totally sold on the home shirt a good alternative option. I don’t think it’s got edge to better Umbro’s efforts in 2007/08 and 2017/18 but it is another shirt which has been very well received with me. 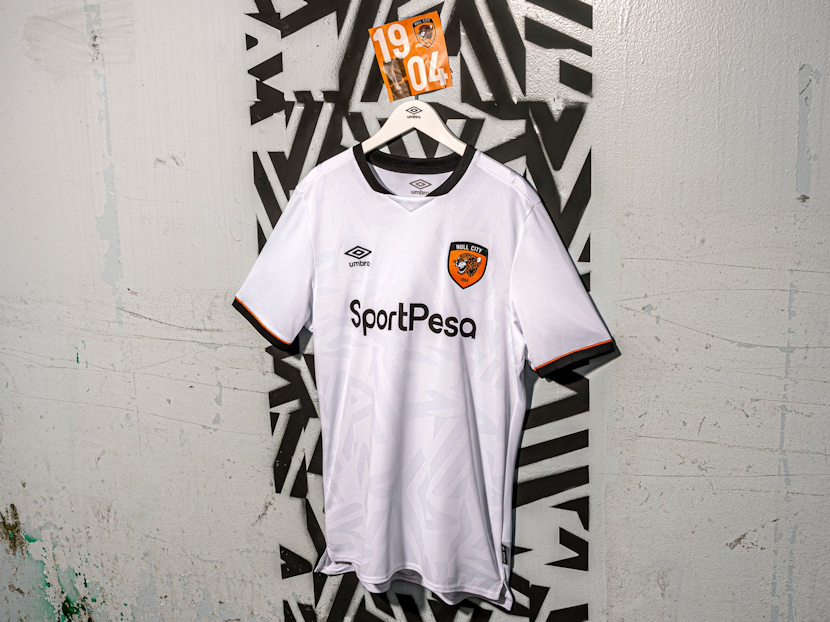 The Kitcast by Hull City Kits – episode 8
Scroll to top