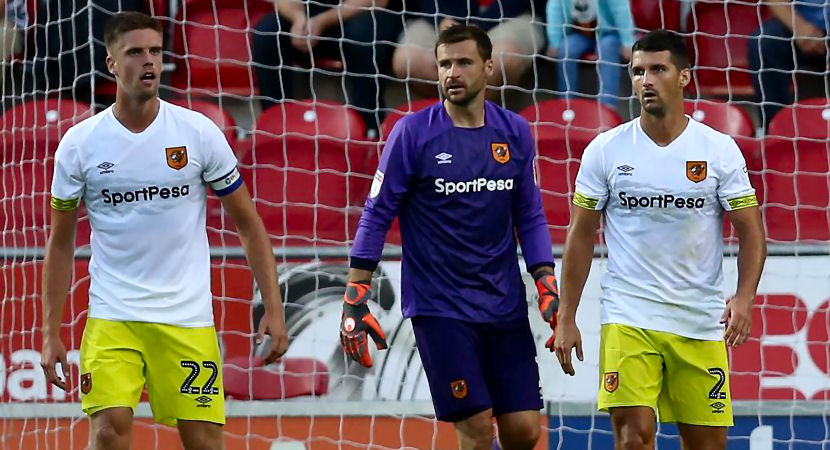 Sometimes you need to see a kit in action before you can offer an opinion, and the 2018/19 third is such a kit. So now that we’ve seen the ‘Sulphur Spring’ shorts in all their glory in the 3-2 win at Rotherham, it’s time to opinion up…

Hmmm, I’m a little bit disappointed with this, and not because there’s some whackiness to it, in the form of fluoro shorts and trim on the shirt and socks, but because there’s not enough whackiness: it’s demi-whacky, and I wish they’d gone full on with the whack.

Because that’s what third kits are for: to be significantly different to the primary and change kits, that and to annoy the tedious curmudgeons who comment on Twitter accounts such as KitCrimes and AwayKitWatch. That means pushing the envelope, using colours, styles and sometimes patterns that you couldn’t, or at least shouldn’t use on home kit, and maybe the away too if a team is known for a certain change kit style. There’s no such thing as a traditional third kit, so tradition shouldn’t be a consideration when a third kit is conceived.

That, is why this kit makes me feel disappointed. A white shirt? That’s what I associate with a Hull City change kit, such as the ace one Umbro gave us last season, so to have it for a third kit feels a bit… safe, and safe doesn’t push envelopes, it seals them and puts second class stamps on them (Yes, yes, I know ‘push the envelope’ stems from aviation and refers to the technical limits of a plane’s performance, but let me have it).

Using a fluoro tone? Oh I’m all over that, it’s time for us to have some kit fluorescence, after all we missed out when it was first a kit trend, back in the late nineties when everyone was getting their rave on (Borussia Dortmund/Sheffield United/Celtic), even Scarborough, with their bile duct green Avec number. However I wish we’d gone full fluoro, shirt and socks too instead of just shorts, though of course that would probably rule out yellow, given we have largely amber primary shirts, but neon green, blue or purple are ruled in, and all of those would work as they offer something massively different to our black shorted primary and change kits. 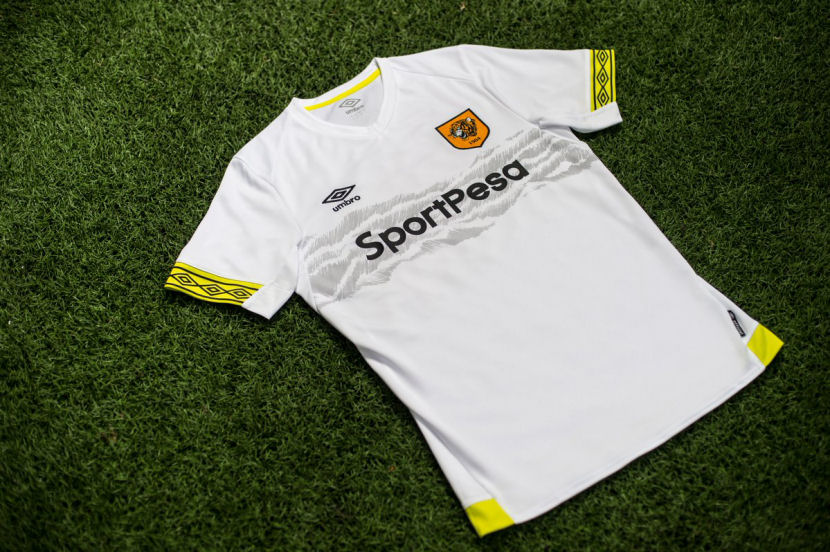 Perhaps it’s the purple kit of 2016/17, or more pertinently the reaction to it (see earlier remark about miserable ‘KitCrimes’ types whose commentary about football kits is almost always utterly joyless). Social Media produces more heat than light, and the reaction to Cactus Purple seemed to be overwhelmingly negative, and perhaps that’s why Umbro and City, or just one of them, we might never know, erred on the side of safe when adding some whacky fluoro fun here. I’d have loved City to have gone with something similar to what Umbro have given Schalke this season.

Some of the criticisms I’ve seen I don’t agree with: “It look’s like a Leeds shirt!” Nah I don’t buy that, City have as much, if not more right to white shirts as they began using them in 1904, whereas Leeds copied Real Madrid’s look in the early Sixties. Plus, while yellow is a staple Leeds’ trim colour, it’s never looked like this, I don’t see a Leeds shirt at all, and when the ‘Sulphur Spring’ shorts are worn, the kit certainly doesn’t resemble anything about the White Shite. “What’s yellow got to do with Hull City?” Well that’s an irrelevant question, third kits aren’t about club colours, in fact they should be about an absolute contrast from club colours. 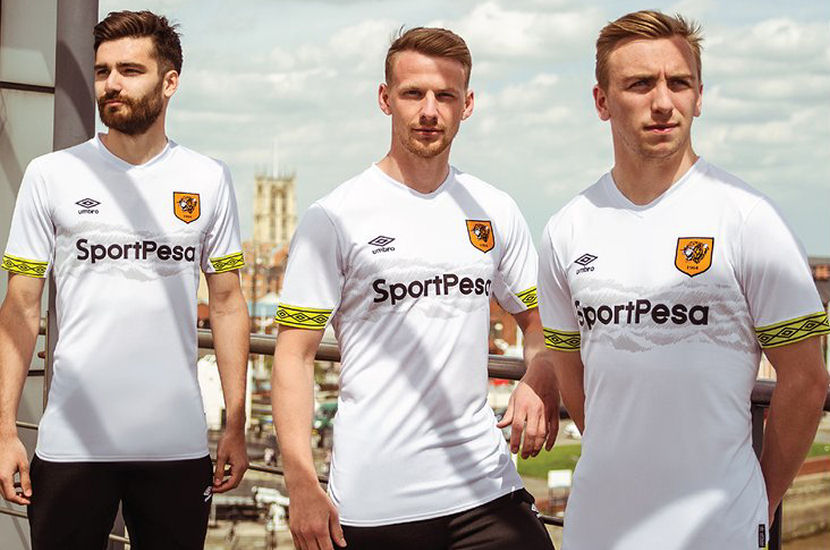 While some people rather like the addition of a subtle grey tiger stripes beneath the sponsor wordmark, but I’m not so keen on it. The jacquard weave tiger stripes of last season’s third shirt worked brilliantly, but this not so much. It feels like a late addition, an afterthought, and the stripes look like they’ve been rendered in charcoal, created by those machines you see in shopping centres that take your photo and ‘hand draw’ you, and real tiger stripes are more solid than that.

I’m not sure I can put my finger on why, but I found myself liking this kit a little bit less after I first saw it in use at Rotherham. Overall I think this kit is ok… just ok. I like the inclusion of a fluoro tone on a Hull City kit, but I would have preferred fluoro use to be more full hearted. I can’t shake the feeling an opportunity has been part seized, but not fully.

Putting this kit in a wider context… Umbro have given us five ace kits in a row, all three 2017/18 kits were wonderful, and the primary and change from this season are brilliantly executed. This one, well it’s ok, but not quite as whacky as I’d hoped. 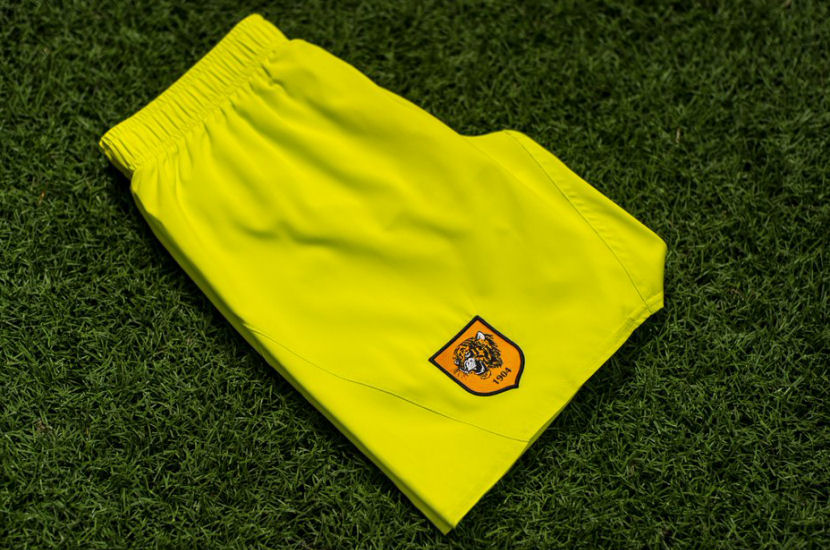 @MikeCarterHKR: The 2018/19 third shirt has hit the racks in Tiger Leisure, so what to make of it? Umbro have produced, in my opinion, two very good shirts for use at the KCOM and on our travels this season, so perhaps it’s not quite surprising that I am left a little bit underwhelmed by the release of the third shirt.

I love the fact that we’ve tried to be a little bit more out there with the colour but I want more of it! We have a tiger style print across the chest on this one in a faint grey, I’d love to see what the shirt would look like with this also in the ‘Sulphur Spring’ colour.

The continuation of the Umbro tapering on the sleeves pleases me greatly as I feel this is the best part of all three of our kits this season. The shorts and socks do the business for the shirt, the full colour shorts are a great match and make up for the lack on colour on the shirt.

Overall we’ve been given another solid trio by Umbro but I do feel we’ve been treated to really beautiful third kits in the past and this one isn’t quite up there. 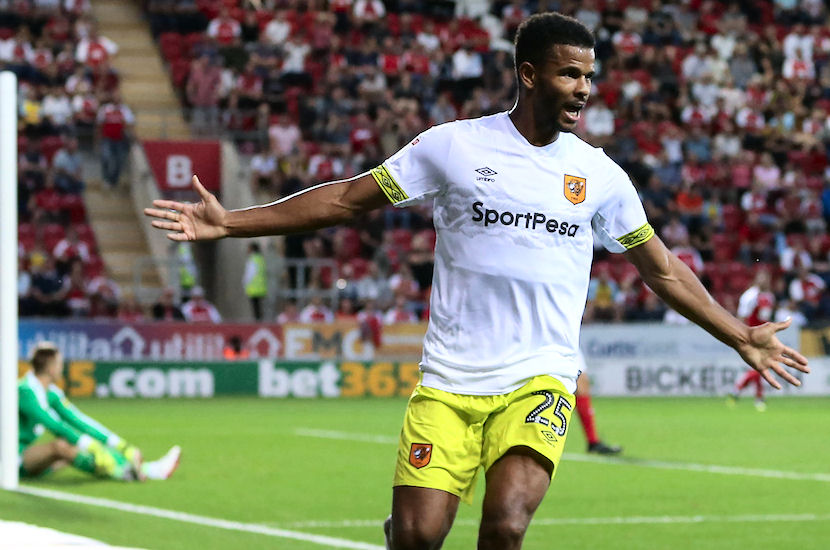