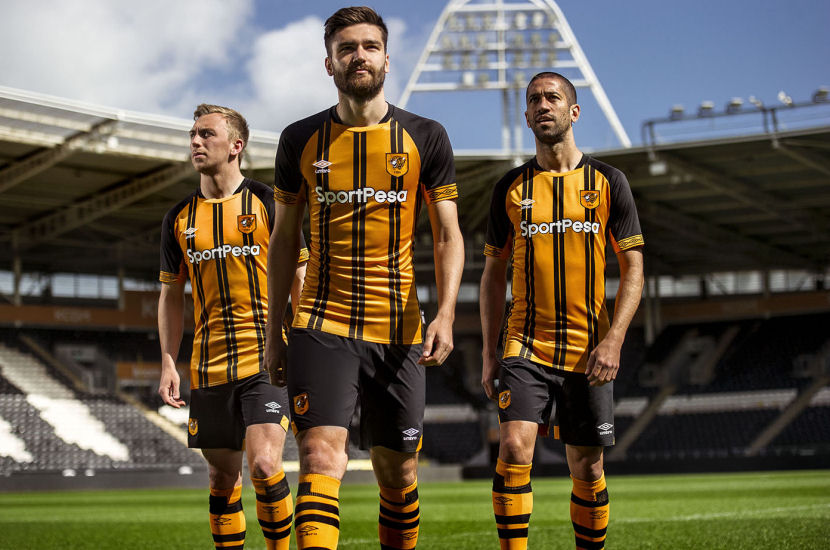 The 2018/19 primary kit was unveiled seven days ago, and it’s time for the HCK kitgeeks (and guest reviewer @Adz238) to spill the beans on what they make of Umbro’s work…

My only issue right now is the weird block style on the rollover of the sock. As for the shirt, the stripes are different and I like them, they make for an interesting change from either large block stripes or pinstripes.

The biggest thing around the shirt for me though is that it connects properly. Unlike the balls up of last years shoulders, the collar, the stripes and the sleeves all connect seamlessly together.

The black sleeves are carried by plenty of amber on the front and back even if the the underarm of the sleeve appears to have some odd amber insert which cuts the lovely Umbro taping short. Why not solid black all round?

I’m assuming it’s comfort related somehow. Anyway, I’m picking a little. It looks ace and whilst my preference is for thicker stripes, this is a rather lovely change from the norm. So I like it. And that’s before you drape it over the delectable Jon Toral. Swoon 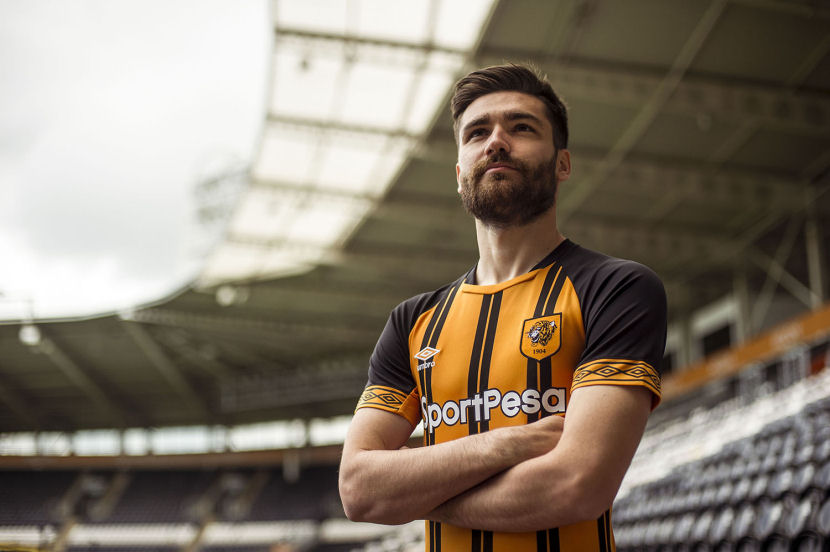 @Adz238: Where to start? How about the double-diamond cuff trim? That is stunning. I know other Umbro teams will have them but they are such a classic touch I’m happy that we got them too!

The double stripes on the body are a great touch as well, something that is both new and keeps the shirt bright with the amber flashing through the middle of the black. The neck line is also something I really like, I feel it leads brilliantly from the black sleeves into that contrasting amber, it cuts off the solid colour and amplifies it all at once.

I’m also a big fan of the sponsor staying simple, not reverting to the blue ball in the middle that I couldn’t stand a few years ago. Keeping it simple really helps make it a beautiful shirt.

The shorts have a nice flash of amber at the back and are quite contemporary, which is fantastic to see with the shirt making nods to the more classic stripe pattern. Moving on to the socks…. I’m happy that they are hooped, I’m a fan of hoops, however in this instance I feel the top of the sock is a lazy finishing touch with a black square left at the top of the turn over looking a little (a lot) out of place!

It’s a shame on an otherwise brilliant football sock. All in all a solid 9/10, surpassing last season’s Home kit, I’d go as far as to say it’s probably the best home kit of recent years. 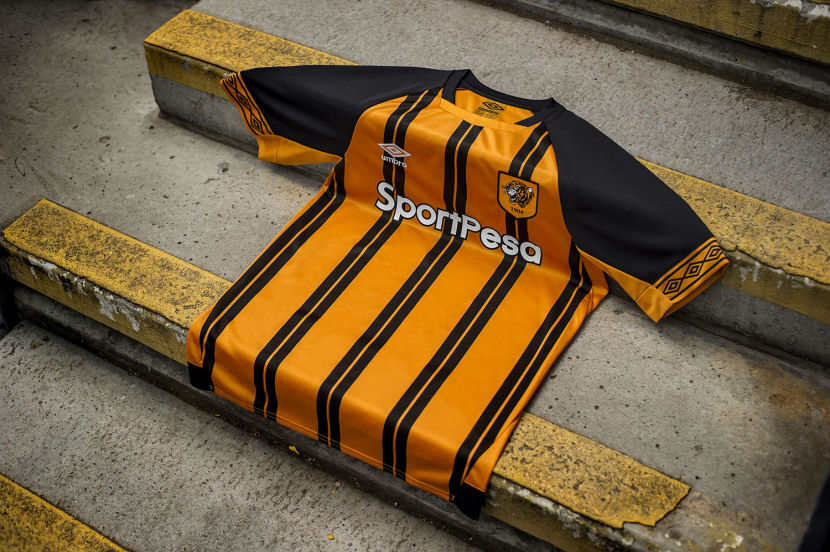 Now, I liked the 2017/18 home shirt a great deal when it was first unveiled, dynamic angled sleeve stripes and all, and came to really love it, to the extent that I could not conceive that Umbro could top it with their 2018/19 follow up. Yet here I am making declarations of love immediately after a kit unveiling.

I’m delighted that we have another striped shirt, we pretty much own the look of amber and black stripes and should always use it for that very reason. That said I think it’s important to maximise the amber in a striped shirt so that overall it looks bright. When grainy images of the kit photo-shoot appeared on Social Media, it was the black Raglan sleeves that stood out to me and I feared they would make the kit look dark overall. Thankfully that isn’t the case as the black stripes on the body panels are quite thin, allowing amber to dominate.

I think Raglan sleeves look better and fit better than set in sleeves, so they represent an upgrade on the 2017/18 home shirt I feel. I wouldn’t say the black stripes on this shirt are better than those of the previous iteration, but I like them a lot. To some the shirt has amber pinstripes atop black stripes, but instead I see a series of twin-stripes, rather than pinstripes. You know the stripes that appear on muscle cars from bonnet to boot? That’s what I see, and I think it’s a good way of retaining stripes but presenting them in a fresh way.

I think I preferred the round collar of the 2017/18 shirt to what’s going on here, but it doesn’t offend my sensibilities at all. Similarly double diamond ‘taping’ looked better going down the sleeve on the 2017/18 shirt than it does here on the cuffs, but the amber on these cuff bands serves to break up the blackness of the sleeves well.

This shirt reminds me of both Nike’s Inter shirt from last year and a shirt Puma made for Borussia Dortmund a few years ago. That’s good aesthetic company to keep!

The club have promised us they’ll start using Hull City rather than just Tigers or the Tigers in communications, and ‘We are Hull City’ on the shirt launch blurb was great to see. It’s a shame that doesn’t extend to the new kit, which still has TIGERS on the back near the neck but no mention of Hull City. I get that the kit will have been signed off months ago, prior to the promise to start using the club’s playing name, but this throwback to a more antagonistic time still rankles. To remedy this, I’d love to see ‘Hull City’ added to the player shirts with heat bonded letters under the numbers. Many German Bundesliga teams have the club name on the back of the shirts in this manner. I don’t think this will happen, but it would make me love a shirt I already love a lot a bit more. 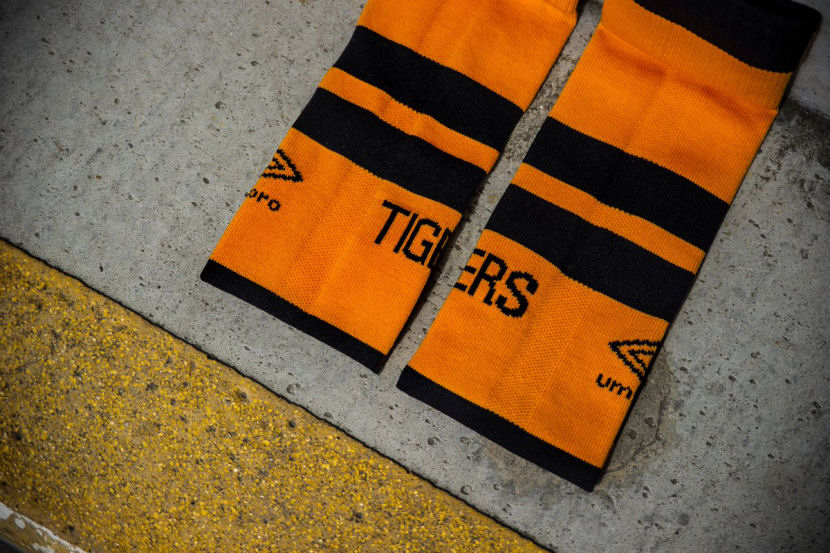 Onto the shorts, they’re perfectly functional and don’t  inspire much comment, unlike the socks. I like the ‘twin-hoops’ which visually connect the socks to the shirts, but the splitting of the foldover band into a block of amber and a block of black is a little jarring. This might be something that I get used to, but on first viewing it looked strange.

It’s not enough to sully what I think is a wonderful kit however. I really didn’t think Umbro could make me love a kit more than I love the 2017/18 home, but they’ve pulled it off. Played, Umbro!