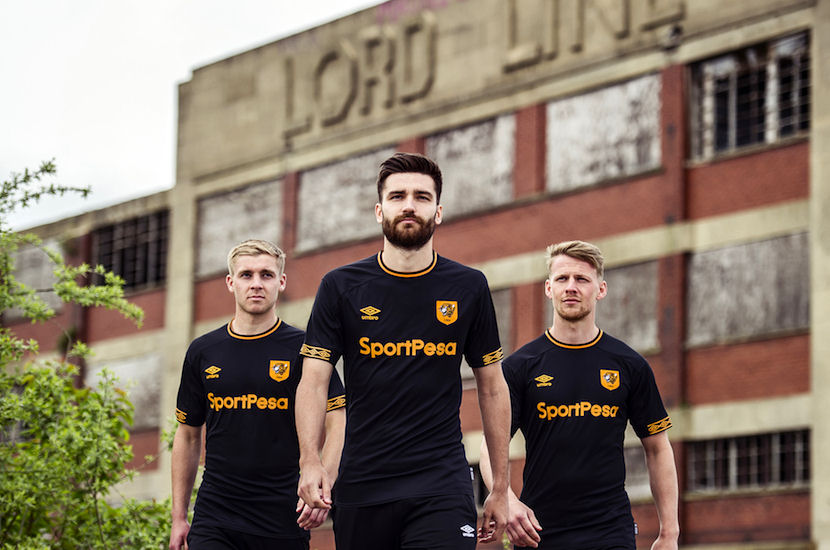 The 2018/19 change kit was unveiled last week and goes on sale today, making it time for the HCK kitgeeks (and guest reviewer @MikeCarterHKR) to stop stroking their chins and offer an opinion on Umbro’s work…

SombreEthyl:  It’s 15 years since Hull City first unveiled a black playing kit, and in that time the darkest of tones has become firmly established as part of the change kit rotation. Indeed this is the third all-black kit supplied by Umbro since they replaced adidas in the summer of 2014, and they’ve got it down to a fine art. Sure it’s tricky to get all black wrong, but that takes nothing away from Umbro, who have got this very, very right.

The most noticeable thing about the shirt is the collar, which feels like a throwback to the round neck of the 1965-69 primary shirt, and that is a lovely touch. It’s clear that Umbro pay attention to our kit heritage and drop elements of it into modern kits, such as the 1963/64 thin black stripes that were replicated on last season’s primary shirt, and for that, I love the double-diamond brand a wee bit more.

In an age of Nike giving all of their teams the same shirt on the grounds of ‘form follows technology integration’, Umbro adding bespoke elements to their templates gets the balance right.

It simply isn’t economically viable for every team in the Umbro stable to get a truly bespoke kit, no matter how many fans moan and treat ‘template’ as a dirty word. If Manchester City and Chelsea get templates, then who are West Ham, Blackburn Rovers and Hull City to expect better? Yet they and us do indeed get more effort in terms of aesthetics than clubs challenging for the Premier League and Champions League, so I’m delighted by that.

This change shirt has a different construction to the primary, which has true raglan sleeves. Here, there are raglan sleeves of a sort, made up of at least three interlocking panels. You won’t see this from afar since the sleeves aren’t in a contrast tone as they are on the primary shirt, but I suspect it ensures a better fit across the shoulders.

Collar trim is often replicated on the cuffs to create a balanced look, that isn’t the case here but the shirt does not suffer from that choice one bit: a feature across 2017/18 Umbro designs is double-diamond ‘taping’ on the sleeve cuffs, and it looks glorious in amber on black here.

SportPesa’s wordmark has been rendered as well as it possibly can be, amber text on a black field will always stand out, as a sponsor wants it to do, but importantly it fits in, it doesn’t look jarring or out of place. This treatment is a quantum leap of an improvement on the 2016/17 application when the wordmark looked tiny, dwarfed by the Kenyan bookies’ ‘globe’, which brought colours that don’t belong on a City shirt to a City shirt. 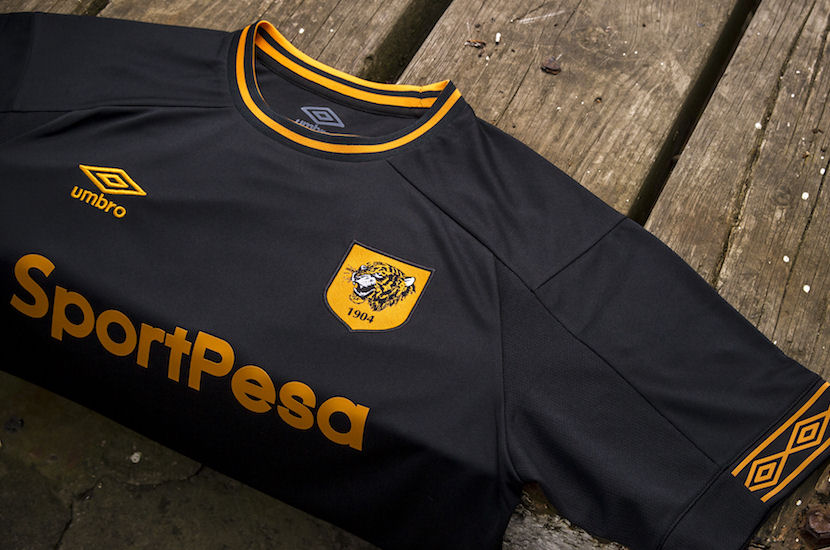 We didn’t see black shorts on the initial launch image, which showed Jon Toral, Stephen Kingsley and Daniel Batty in track pants hanging about near the Lord Line building like a gang of trespassing ASBO scamps. Presumably that’s so the players didn’t get bitten by ticks and contract Lyme Disease, but it made us wait briefly to see if a black change shirt meant a second set of black shorts.

Indeed it did, the change kit’s black shorts are a distinct set from those of the primary kit, (not the first time we’ve had two sets of black shorts in a season, we did that in 2003/04 and 2012/13, both promotion seasons!) and frankly I like this set more. The double-diamond ‘taping’ matches the trim of the shirt sleeves giving the visual balance I referred to earlier, and looks great. Completing the kit are black socks that offer useful interchangeability with the primary kit’s set should need arise.

Judging this kit on its own merits, I really like it, it’s a great addition to the City kit pantheon.

Presumably the third kit is going to predominantly light in tone, a third set of dark shorts would be preposterous! Although I feel the black change shorts are better than those of the primary kit, I would rather the change kit shorts to have been amber, and interchangeable with the primary shirts. This would have elevated amber shorts from being alternates to officially part of the kitset. A minor quibble however.

Looking beyond Hull City, though, and black often feels like a slightly clichéd, ‘it works well as leisurewear with jeans’ get out from needing to be truly creative, there’s a philosophy of ‘black for black’s sake’. That’s not a charge aimed at Umbro here, by any means, I’m loving what they’ve supplied City this last few years, all three 2017/18 kits were strong and they are on track to repeat the feat in 2018/19.

Perhaps I’m being just a bit hypocritical to even consider black shirts as overused, as I’d have an all-white change kit every season if it was up to me, but then we have a tradition of white change kits that began over a century ago.

Black change kits have become a modern tradition, and this is one of the better iterations. Played Umbro! 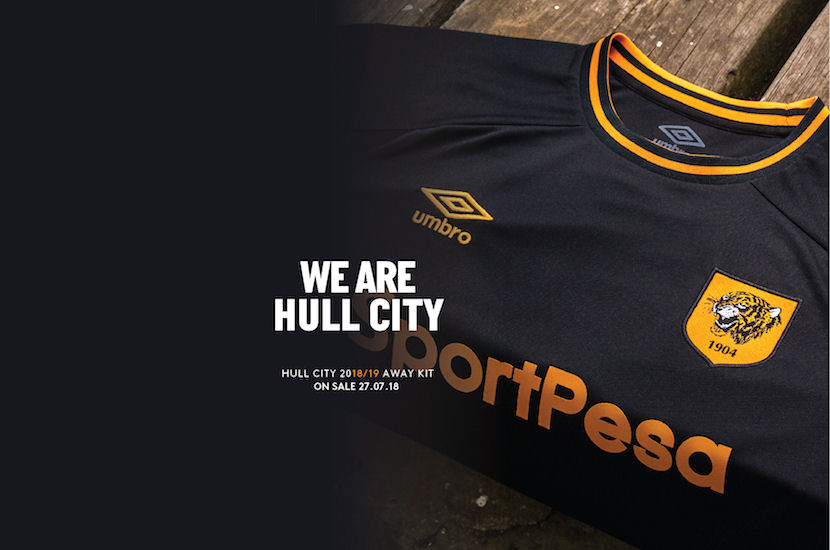 @JGHull:  Smart. But hard to get mega excited by.

It reminds me of 2015/16 change. Similar principles at play, just in black. Whilst the taping offers something a little different to the solid cuffs on 2015/16, it’s not radically different in style.

Whilst mentioning 2015/16, it’s also worth mentioning City’s away kit should be white. I know, I know – Yeovil Away uff uff uff – but I like us in white. So there.

Having said that, if you were having a go at a plain black kit, you’d be happy if this was the culmination of your work. The double diamond taping that appears on all Umbro kits this year is lovely and a throwback for middle aged folk everywhere.

The treatment of the sponsor is nicely done again too. I’ve not seen Les’ words at the time of writing but I bet they mention amber shorts. So, yeah, what Les said. Amber shorts with this would be ace. The home kit is double brilliant this year due to a new look stripe and this falls short of the home kit in terms of inventiveness. But it’s a nice enough plain black kit with snazzy taping bits and a better than normal launch.

Lastly, hopefully it does also mean the third kit can be a bit more out there. So, come on Umbro. Let’s have a colour nobody can agree on again. It’d be fun to disagree on social media over “snot green” or “lime sherbet” * 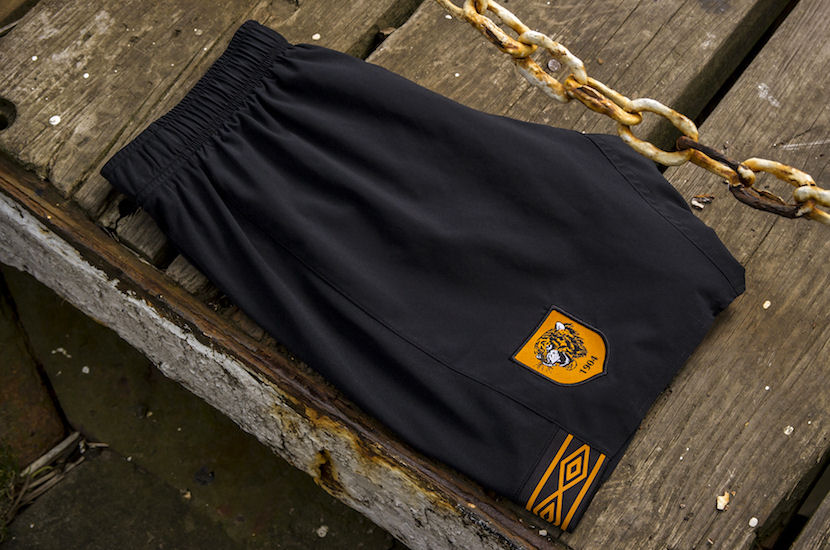 @MikeCarterHKR:  Whilst you’re sat reading this over a morning cuppa, or maybe on the commute to work, I’m likely stood outside the Prospect Centre Tiger Leisure waiting patiently in line to pick up this new piece of Hull City merch! It is, for me, one of those shirts that you just need to pick up on release day.

Umbro have once again smashed it out of the park with their efforts to provide us with another top notch Hull City strip. Plain black has been used a few times in recent seasons, and was largely well received by fans, and this looks to have quickly gained similar respect.

It is a simple yet effective look for the Tigers on their travels. The follow up of a third shirt allows us to have the all black attire without compromise of a kit clash. SportPesa have encouragingly allowed their name to appear in club colours rather than their corporate tones and it is amazing how such a small touch can have such a huge influence on a kit.

In 2018/19 Umbro have once again returned to retro roots with the famous Umbro taping appearing across the sleeves! This, in my opinion, is a great finishing piece to the kit and again in colour coordination with the Tigers colours. I am a huge fan of the 70s-esque taping and to see it return for a second season is fantastic! Even though we’ve seen it before, it has a unique twist on an effective design style. The amber neck trim just adds to the shirts appeal for me and it’s nice to see a crew neck finish return to a Hull City shirt.

Beautiful. Glorious. Sexy. These are just three of the words that I would use to describe the new Hull City 2018/19 change shirt. 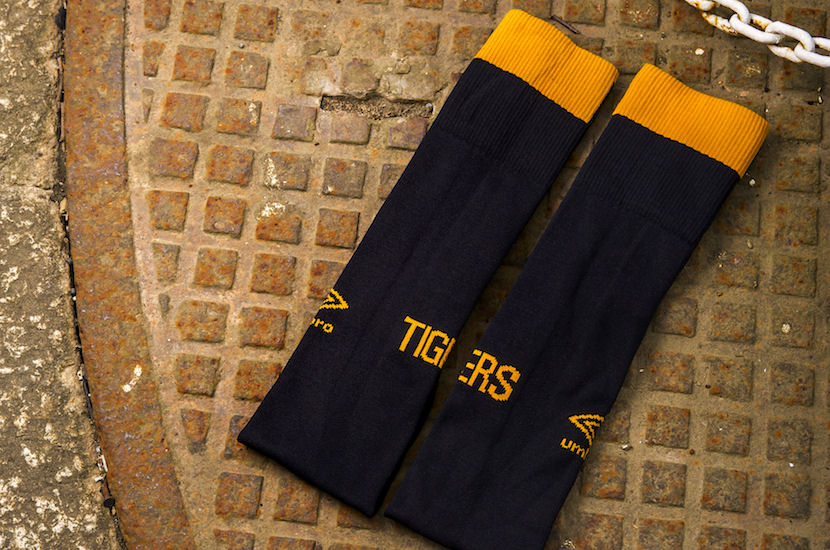